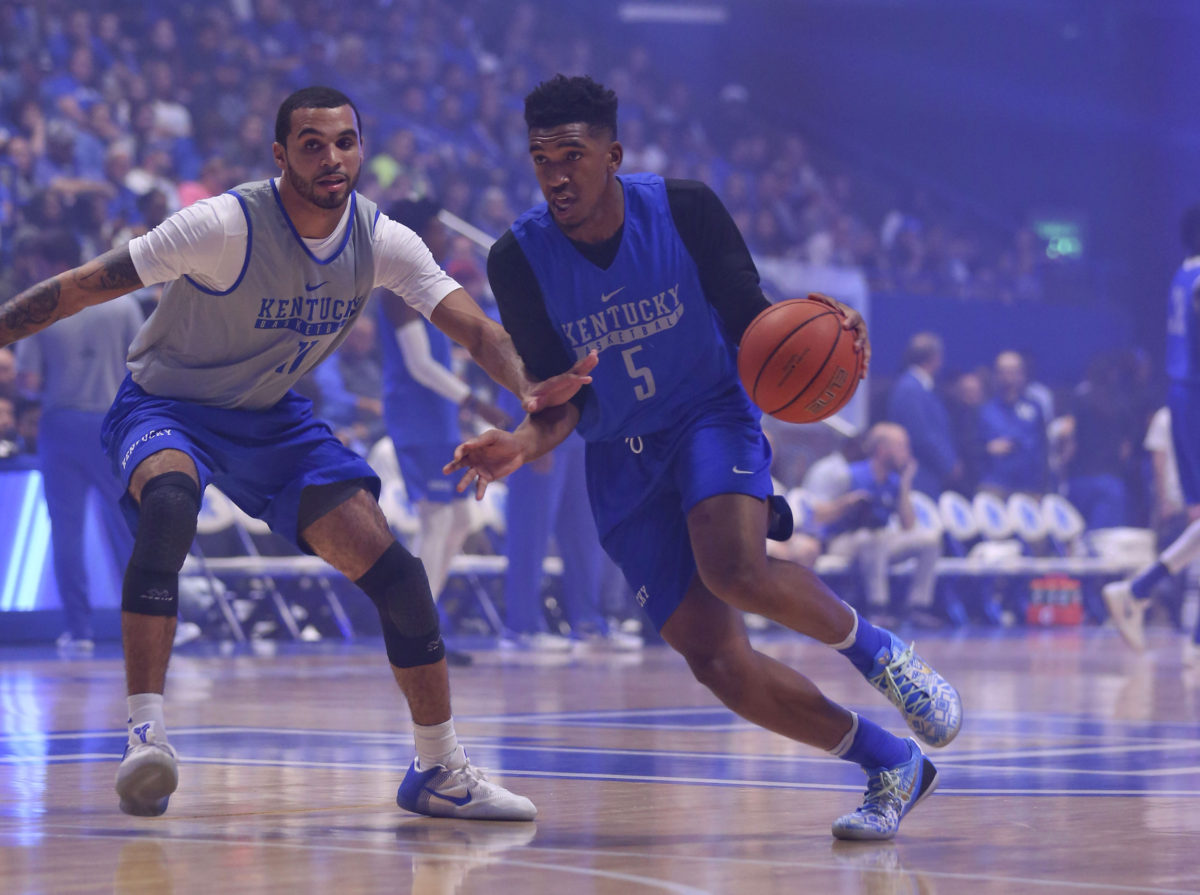 The calendar has flipped to 2017 and we are now about three months from the Final Four in Glendale, Ariz. With that in mind, here are 2017’s Top 12 College Storylines.   1. Which undefeated team will lose first? Three unbeaten teams remain: No. 1 Villanova (14-0), No. 4 Baylor (13-0) and No. 7 Gonzaga (13-0). Which of them will fall first? The defending national champion Wildcats have won 20 straight games — with their last loss coming to Seton Hall in the Big East Tournament championship game all the way back in March. After holding off Creighton, 80-70, on Saturday in Nebraska, they head to No. 13 Butler on Wednesday. Butler is coming off a 78-61 win over Providence in which it shot 62 percent. After that, their next toughest opponent looks like a Feb. 11 date at No. 17 Xavier. Baylor hosts Iowa State on Wednesday and Oklahoma State on Saturday before heading to No. 11 West Virginia on Jan. 10. If the Bears remain unbeaten through Saturday, that could be a tough ask in Morgantown. The Zags host No. 19 Saint Mary’s on Jan. 14 and after that their toughest date appears to be Feb. 2 at BYU.   2. Can Villanova repeat? Keep in mind that Villanova remains unbeaten — and No. 2 according to KenPom.com — despite playing without stud freshman Omari Spellman (academics) and combo guard Phil Booth (knee), who went for 20 against North Carolina in the 2016 NCAA championship game. Josh Hart looks like the National Player of the Year and sophomore guard Jalen Brunson erupted for a career-high 27 in Saturday’s win over previously unbeaten Creighton. If the NCAA Tournament began today, Jay Wright and Company would likely be the No. 1 seed in the East, where they would play two games in Buffalo and two at Madison Square Garden for a shot at the Final Four in Arizona. There are about 8-10 teams who look like Final Four contenders at this point, but you’d be crazy to bet against the Wildcats getting back there again. There hasn’t been a repeat champ since Billy Donovan and Florida did it in 2005-06, but don’t be shocked if Villanova cuts down the nets again.

3. Who’s the National Player of the Year? It’s only January, but Josh Hart has to be the prohibitive favorite to win the Wooden and Naismith Awards at this point. The 6-foot-6 senior from Silver Springs, Md., is averaging 20.3 points, 6.8 rebounds and 3.5 assists for the No. 1 team in the nation and the defending NCAA champions. That includes a 37-11-4 outing on Dec. 10 against Notre Dame. Duke’s Luke Kennard, Kansas’ Frank Mason, Iowa Peter Jok, UCLA’s Lonzo Ball and Wisconsin’s Nigel Hayes could also be included in the conversation, but Hart is the odds-on favorite at this point. “He’s as good as anybody [in the country],” said Irish coach Mike Brey. “I definitely have a special spot for seniors. But here’s a guy who already set the tone on a national championship team, so I give him the benefit of the doubt.”   4. Will Kansas win a share of the Big 12 title for a 13th straight season? Kansas coach Bill Self has been nominated for the Naismith Hall of Fame, and it says here he should be inducted at the very first chance he’s eligible. The man has already led Kansas to at least a share of the Big 12 regular-season title for 12 straight seasons — along with the 2008 NCAA championship. Kansas is the favorite for a 13th straight crown this year but should be tested by No. 4 and unbeaten Baylor and No. 11 West Virginia. Still, the Jayhawks have the most experienced backcourt maybe in the country in Devonte’ Graham and Frank Mason, while freshman Josh Jackson should only get better as the year progresses.   5. Is the Grayson Allen situation going to mess up the Duke mojo? Duke was installed as the favorite to win the NCAA championship by just about everybody, including Bovada. But that was before junior guard Grayson Allen was involved in yet another tripping incident, received an indefinite suspension from Duke coach Mike Krzyzewski and was stripped of being a captain. Now the question must be asked: How much will all of this affect Duke’s chances at winning the NCAA championship. They were stunned at Virginia Tech, 89-75, on Saturday in their first game without Allen. It was Virginia Tech’s first win over Duke in 10 meetings. There’s a long, long way to go and Duke is still integrating the freshmen Jayson Tatum, Harry Giles and Marques Bolden. Plus, you have to figure Allen will be highly motivated once he returns. But all of this turbulence at the minimum threw a major speed bump into Duke’s yellow brick road to Coach K’s sixth NCAA title.

6. Will this Kentucky team win John Calipari his second NCAA championship? Since arriving at Kentucky in 2009, John Calipari has redefined the one-and-done approach to college basketball while producing 28 NBA Draft picks. He’s led the Wildcats to four Final Fours and one NCAA championship. Yet critics say he should have won more titles with all the talent he’s recruited and coached. This current team doesn’t look like it has a future No. 1 draft pick like Anthony Davis or Karl-Anthony Towns but led by freshmen guards De’Aaron Fox and Malik Monk, and sophomore Isaiah Briscoe, Kentucky is a nightmare to defend and ranks No. 3 nationally in scoring offense at 93.5 points per game. Another deep run in the NCAA Tournament seems highly possible, and a second championship for Calipari would only add to his Hall of Fame legacy.

Stop what you’re doing and watch Malik Monk destroy the universe with this dunk till the end of time. pic.twitter.com/MWfJAjbimZ

7. Will Lonzo Ball lead UCLA to its first Final Four since 2008? Before the season began, Bovada installed UCLA at 50-1 odds to win the NCAA championship. Syracuse (20-1) and UConn (40-1) both faced better odds. But here we are in early January and No. 2 UCLA looks as dangerous as any team in the nation. Yes, they are coming off their first loss of the season to a very potent Oregon team, but UCLA also went into Rupp Arena and ran a high-octane Kentucky team off the court. Led by projected top-5 pick Lonzo Ball and fellow freshman T.J. Leaf, alongside a strong supporting cast including Aaron Holiday, Bryce Alford, Thomas Welsh and Isaac Hamilton, the Bruins rank No. 2 in Division 1 basketball in offense at 93.9 points per game. They are one of many bluebloods with a chance to make the Final Four, and the college version of “Showtime” sure could make the Big Dance fun to watch.

8. Will Northwestern finally make the NCAA Tournament? We all know the history: Northwestern is the only long-standing member of a power conference to have never appeared in an NCAA tournament. But Chris Collins’ club is currently 12-3 — with wins over Dayton, Texas and Wake Forest — and ranked No. 42 by KenPom.com. If the NCAAs started today, they would be a 10 seed, according to ESPN’s Joe Lunardi. “I’ve said this before—this isn’t the old Northwestern,” sophomore Vic Law told Sports Illustrated’s Brian Hamilton. “In years past, Northwestern was always, ‘Let’s compete tonight,’ or ‘Let’s hope to have a good game.’ Now we’re going into games like, we’re better than these teams. We’re coming in confident, we’re hungry to play.”   9. Will Sean Miller or Tony Bennett make the Final Four? Sean Miller has a career record of 320-110 (.744) with four Elite Eight appearances, including three at Arizona. Tony Bennett’s career mark is 245-107 (.696) and he led Virginia to the Elite Eight last year for the first time in his career. Both Miller and Bennett are considered among the best coaches in the college game — yet neither has ever coached in a Final Four. Will this be the year that changes?   10. What the heck is going on at Syracuse? One year after making a storybook run to the Final Four behind freshman sharpshooter Malachi Richardson, Syracuse is a hot mess. The Orange have lost six of their last 10 games, including an embarrassing 33-point beatdown by St. John’s at the Carrier Dome and a 15-point loss on Sunday to a Boston College team that went 0-18 in ACC play last season. Jim Boeheim used his fourth different starting lineup this season and has consistently lamented his team’s point guard play. As many have pointed out, had Tyler Ennis remained at Syracuse he would’ve been a senior now and the Orange’s situation might be different.   11. Will the ACC put 10 teams into the NCAA Tournament? ESPN’s Joe Lunardi currently has 10 ACC teams in the NCAAs, but they aren’t the same 10 many had picked before the season began. Syracuse sure doesn’t look it will go dancing at this point (barring a March miracle), but Lunardi has Duke, North Carolina, Louisville, Virginia, Miami, Florida State, Pittsburgh, Notre Dame, Virginia Tech and Clemson going dancing right now. That would mean that 80 percent of the league would make the Big Dance, with 10 of the field’s 68 teams from one conference.   12. Who will be the No. 1 pick in the NBA Draft? This NBA Draft figures to be as loaded as any in recent memory, but who will be the No. 1 overall pick? For the second straight season it could turn out to be a freshman whose team doesn’t go dancing. One year after LSU and Ben Simmons missed the NCAAs, Markelle Fultz and Washington could follow suit. The 6-4 freshman guard from Upper Marlboro, Md. — who is averaging 22.0 points, 6.3 assists and 6.2 rebounds for a 7-5 Washington team — is the projected No. 1 pick by DraftExpress.com. There’s still a lot of time and there are plenty of challengers, with nine of the projected top 10 picks on the site all freshmen, including N.C. State’s Dennis Smith, Kansas’ Josh Jackson, UCLA’s Lonzo Ball, Kentucky’s Malik Monk and Duke’s Jayson Tatum, among others.

Markelle Fultz Lit Up The NCAA In Non-Conference Play. @MarkelleF Is Ready For The Pac-12! ?

Coach K to Undergo Lower Back Surgery, Jeff Capel to Step In