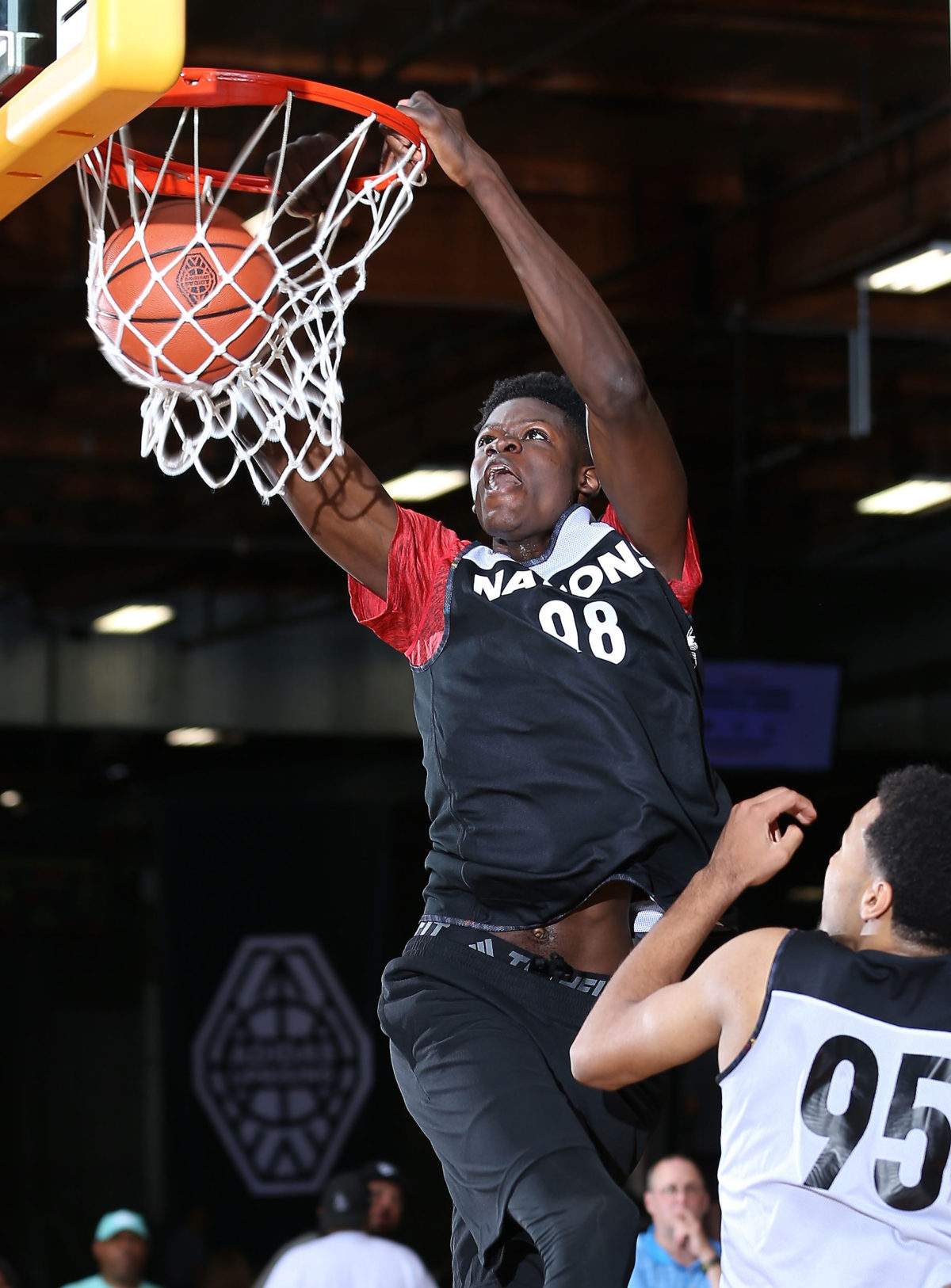 The NCAA early signing period is in the books and there was a flurry of activity leading up to — and just after — the final day on Nov. 16. Wendell Carter Jr. waited until a week after the early period to announce he had signed with Duke, announcing it on Wednesday via a James Bond-style video. That followed a busy few days in which center Bourama Sidibe picked Syracuse, point guard Quade Green chose Kentucky and forward Billy Preston opted for Kansas. Now as we look ahead to the spring signing period which runs April 12-May 17, here are five compelling questions on the recruiting front: 1-Where will Mohamed Bamba take his talents? The 7-foot center from the Westtown (PA) School and the PSA Cardinals is working with a list of seven schools: Duke, Kentucky, UConn, Michigan, Syracuse, Texas and Harvard. He has already taken unofficial visits to Harvard (Sept. 24) and Kentucky (Oct. 14), and an official to Michigan in early September. Quade Green, Bamba’s PSA Cardinals, teammate told ZAGSBLOG he plans to recruit Bamba, and several others, to Kentucky. Meantime, Bamba has also been linked to Duke signees Carter Jr. and Gary Trent Jr. But don’t count out Texas, either. “Mo Bamba and Quade Green are close friends and they played AAU together and I believe that they enjoyed playing together,” Evan Daniels of Scout.com said on The 4 Quarters Podcast. “I think any time that you can have a close friend already in your recruiting class, it can help that school. You certainly can’t count Kentucky out. “I don’t think you can count Texas out. I think he really liked his visit there and they could even be the leader right now. Mo’s not going to say that and there’s still a long ways to go. But Texas is certainly a legitimate player.” Bamba is currently projected as the No. 2 pick in the 2018 NBA Draft by DraftExpress.com, behind Arizona-bound 7-footer DeAndre Ayton.   2. Will Hamidou Diallo go to the NBA or to college? As first reported by ZAGSBLOG in August, the 6-6 Diallo out of Putnam Science Academy (CT) and the NY Rens is weighing whether to declare for the 2017 NBA Draft or go to college for a year. He has indicated his desire to attend college, but more than 30 NBA scouts watched him this past weekend at the National Prep Showcase in New Haven, Conn. After he was initially projected as the No. 11 pick in the 2018 Draft by DraftExpress.com, he’s now completely off the site’s 2018 mock because he’s no longer viewed as one-and-done. Diallo is considering Kentucky, UConn, Syracuse, Arizona, Kansas and Indiana. Kentucky assistant Tony Barbee saw Diallo Friday night, while Syracuse head man Jim Boeheim was in the building on Saturday night. UConn likely would have been in attendance, but the team is in Maui. “Based on what I saw tonight and this summer he should attend college and continue to develop his game,” one NBA scout said after Friday’s performance in New Haven. “He’s athletic and flashes some skill but has a ways to go from being NBA ready. I think someone would draft him for his talent but it’s not about making the league, it’s about giving yourself the best chance to stick.”

3. What’s going to happen with Trevon Duval? The 6-foot-4 point guard from IMG Academy (FL) recently named a top five of Arizona, Seton Hall, Kansas, Duke and Baylor. Schools like Maryland, UCLA and Villanova, once in the mix, are now seemingly out. It remains unclear if Duke has offered, but Carter Jr. said he now plans to recruit Duval to join him at Cameron Indoor Stadium. Duval has yet to take any official visits and has kept a very low profile on his recruitment, other than to say it will be a “business decision.” “My situation is different because I’m planning to play one year of college,” Duval told USA Today. “For that reason I want to make sure I pick the best situation to have success right away. I want to win wherever I go. For me, it’s more of a business decision.” “There’s just a long ways to go with Trevon Duval’s recruitment,” Daniels said. “He has his list of five, but I couldn’t tell you who I think the top two schools are for him.” Duval is projected as the No. 6 pick in the 2018 NBA Draft by DraftExpress.com.   4. What does Trae Young do now? With Quade Green’s commitment to Kentucky, they now have two guards in the Class of 2017 with Green and Shai Gilgeous-Alexander, a 6-6 combo guard from Canada who plays at Hamilton Heights Christian (TN). What that means for Young is open to interpretation. The 6-2 floor general from Norman (OK) North and MoKan Elite was believed to be focusing on Kentucky and Oklahoma, with Kansas and Oklahoma State among those also involved. With Green going to Kentucky, it remains unclear if they would take another point guard, or simply put all of their efforts into Diallo in terms of fortifying the backcourt. That could spell good news for Oklahoma, Young’s home-state school. “I think Trae is looking pretty closely at Oklahoma and Kansas,” Daniels said. “Oklahoma State’s still involved, but in my eyes I think it’s Kansas and Oklahoma. I went on record saying I don’t think Trae Young ends up at Kentucky and I still believe that. I don’t know if Kentucky will take three point guards and I don’t know if I see Trae Young going to a place that already has two.” Young won the Peach Jam with MoKan Elite and then captured a gold medal with the USA U18 team at the FIBA Americas Championship.   5. Who’s next for Matt Coleman? Three big point guard dominoes still remain in Duval, Young and Matt Coleman. Coleman, the 6-foot-1, 174-pound point guard from Oak Hill (VA) Academy, plans to commit sometime within the next month and then sign during the spring. “I think that’s going to be the plan,” he said recently. “I could see a commitment coming within a month from now, but right now I just don’t have that feeling of where I want to go in my heart.” Coleman is down to Duke, Texas and Stanford, and Carter Jr. told USA Today he will “be talking” to both Coleman and Duval on Duke’s behalf. The fact that he didn’t commit to Duke in the early period signifies he is seriously considering Texas, which is also in the mix for Bamba, with whom Coleman visited. “Mo was there with me,” Coleman said. “He said he likes what Shaka [Smart] does but I think he’s signing late as well. I don’t think we’re going to rush it, we’re just going to let it come to us.” If Coleman ends up picking Texas (or Stanford), it will leave Duke without a point guard in the Class of 2017 (along with Syracuse), meaning both schools might have to look hard at the junior college or graduate transfer options come spring.