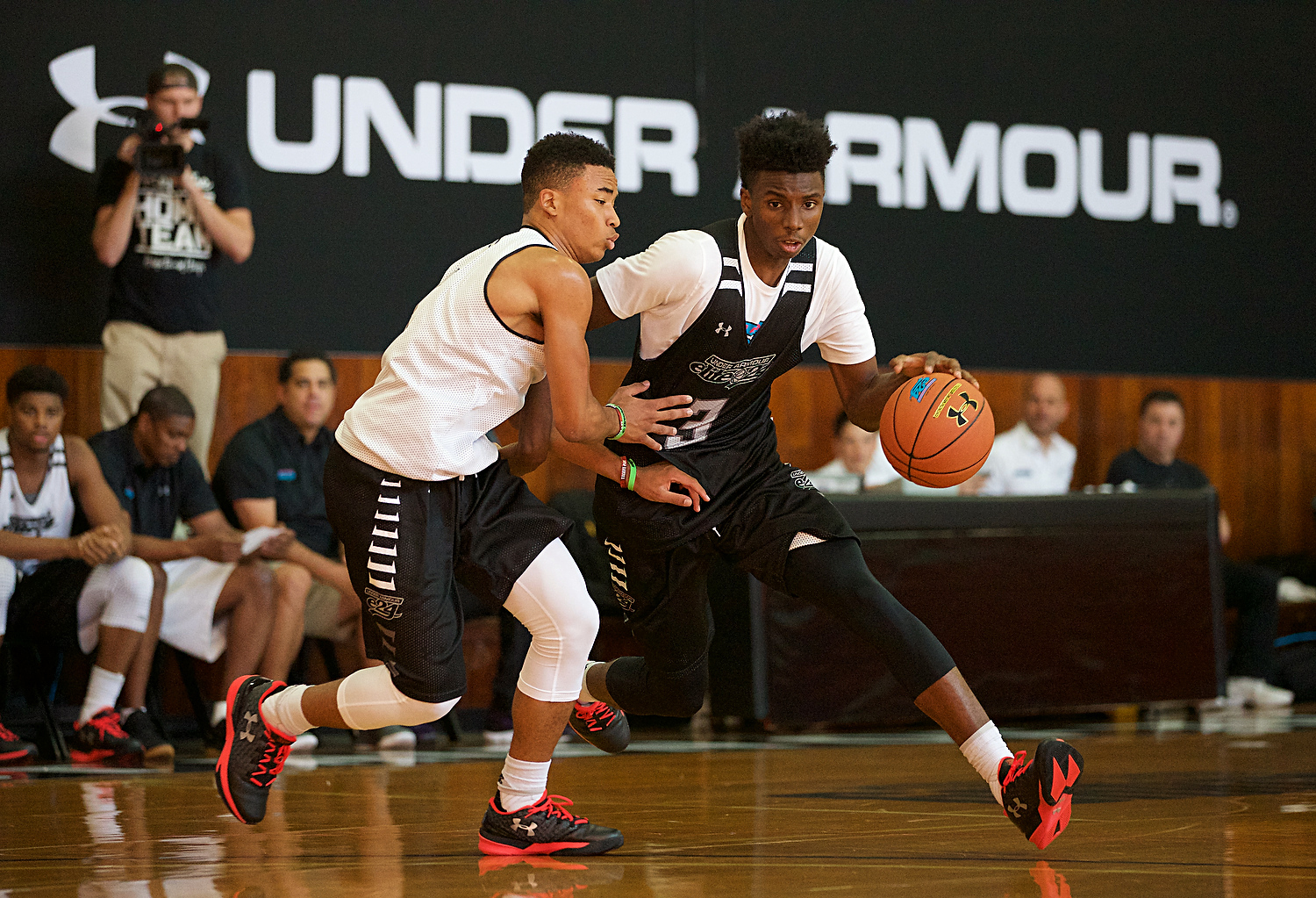 NEW YORK — Hamidou Diallo could pull a Thon Maker and go directly from the preps to the pros in 2017, but the 6-foot-6 New York City wing says he prefers the college route. “Possibly,” the high-flying shooting guard told SNY.tv at the Under Armour Elite 24 practice on Friday of declaring for the 2017 NBA Draft, “but I’m not really looking at that right now. But it’s possible.” He added: “I wouldn’t be able to answer that question for you because I’m honestly just thinking about college right now. I want to go to college for sure.” The 7-foot Maker went straight from Orangeville Prep/Athlete Institute to the NBA this past June when the Milwaukee Bucks picked him with the No. 10 overall pick — shocking a lot of people in the process. “Man, it is, it is surreal,” Maker recently told SI.com. “But you know, I gotta show I belong now, find a way to stick here and stay.” Like Maker, Diallo will be a year removed from his graduating class because he graduated from Putnam Science Academy in May. And like Maker, he plans on doing a post-graduate year (also at Putnam Academy). And like Maker, he will turn 19 the year of the Draft (July 31, 2017).

//platform.twitter.com/widgets.js Some 50 NBA scouts are credentialed for the Elite 24 Game, and one told SNY.tv that at this point Diallo probably isn’t more than a second-round pick. “Borderline,” the scout said. “Someone may bite because of his motor and athleticism and bet they can teach skills but he’s pretty raw. He may be worth a second-round pick; if he can flash a 3-ball, that will change things. “If he had a [jump] shot he’d flirt with the lottery. But he’s not a Malik Beasley or Dwayne Bacon right now.” Diallo, a Queens, N.Y., native who plays on the Nike EYBL circuit with the NY Rens, is being recruited by a Who’s Who of colleges, including Kentucky, Syracuse, UConn and Arizona, and Putnam Science head coach Tom Espinosa believes Diallo will spend at least one year on campus. “I believe he will go to college,” he told SNY.tv. “Before college, I believe this is a huge year for him. I’ve seen him mature from two years ago to last year and I strongly believe he will continue to grow into this post-grad year.” Andy Borman, who won an NCAA championship and Duke and coaches Diallo with the NY Rens, says Diallo is a future pro — it’s just a matter of when. “With Hamidou’s natural talent, work ethic, and IQ I can see why entering the draft in 2017 would be a distinct possibility for him,” Borman said. “At the end of the day, he is an extremely mature kid and is capable of making whatever decision is best for him and his family.” He added: “I have coached a number of pros and he is going to be one of them soon. It’s just a matter of him deciding what is the right time to make that move.” Diallo, who threw down several rim-rattling dunks in front of the NBA personnel at the Gauchos Gym the last two days, is still going through the recruiting process. “I want to cut it to five [schools] to slow things down, but I don’t know if that’s possible,” he said. “I’m trying to finish up this game and finish up the rest of the summer with my family. Coaches [have] been calling and texting me but I’m telling them right now I’m with my family and it’s been a long summer.” Diallo is in regular touch with Kentucky coach John Calipari, who has targeted Diallo as a potential future Wildcat. “Yeah, I hear from Kentucky,” he said. “I spoke to Cal early this week. Just basically reaching out and talking to me, building a relationship. nothing about recruiting. I have a good relationship with Coach Cal and coach [Tony] Barbee. I didn’t take a visit so I honestly don’t know what Kentucky’s like.” Asked if he will visit there, he said, “I haven’t really thought about visits but I’ll probably visit Kentucky.” Diallo hears from other schools on the regular. “I heard from UConn, Syracuse, Arizona, Arizona State, Kansas been calling,” he said. “It’s just been a bunch of schools.” Some college coaches believe Diallo could ultimately end up going straight to the NBA like Maker. “Why be exposed in college?” one college coach said. “Go get 30 in every high school game and let people think you’re better than you are.” At this stage, Diallo is leaning toward spending at least one year in college, but admits going to the NBA in 2017– or at least testing the waters and getting feedback under the new rules — is possible. “You never know what happens,” he said, “that’s why I’m saying it’s possible.” And like ZAGS on Facebook

Kevin Knox to Cut List Again, Uncertain on Package With Carter and Trent