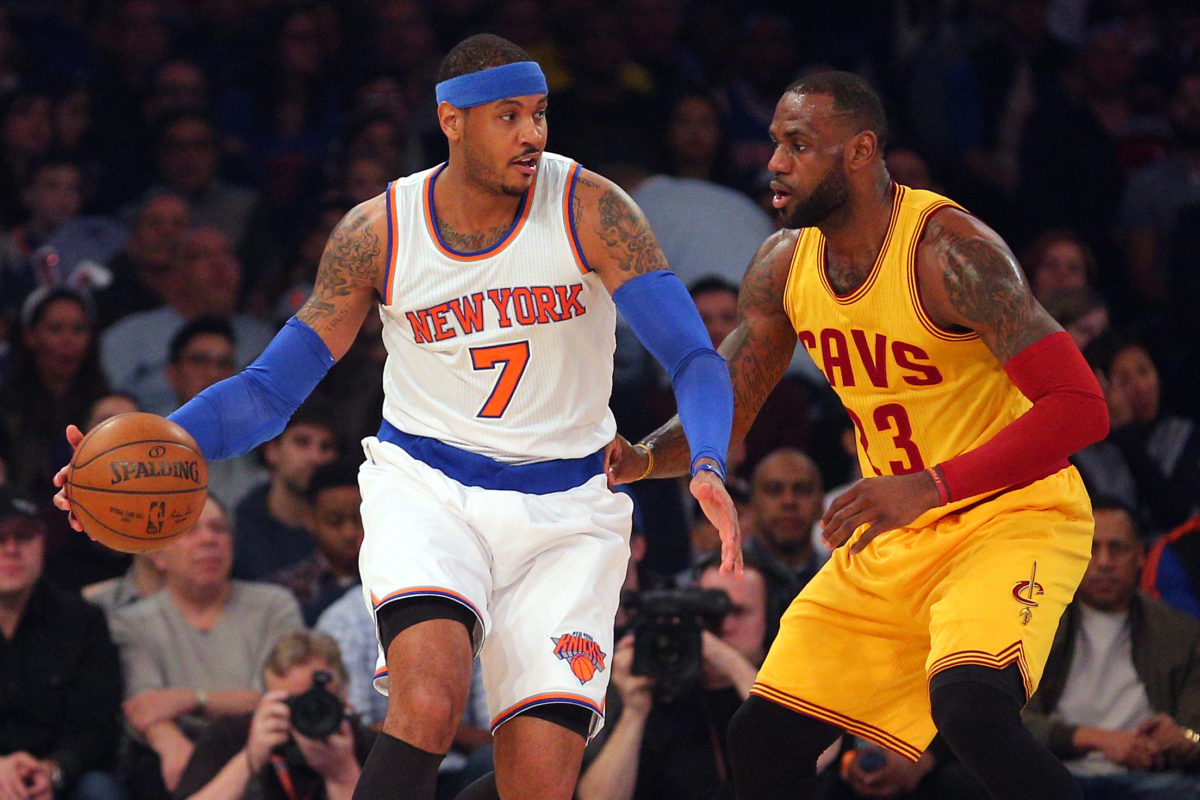 GREENBURGH, N.Y. — When his good friend LeBron James and the Cleveland Cavaliers receive their NBA championship rings during a ceremony Tuesday night at Quicken Loans Arena, Carmelo Anthony knows what emotions will be running through his body. “I mean, wishing that that was me,” Anthony said on the eve of the Knicks’ season opener. “I think all type of emotions kind of go through you when you seeing that, and especially on somebody else’s court. But we’ll get over that, I’ll get over that quick. Once it’s time to go, it’s time to go. You’re not really thinking about that.” The Knicks haven’t won an NBA title since 1973. Anthony, 32, has never won one. And as long as James resides in the Eastern Conference, Anthony’s path to an NBA title will likely go through the “Chosen One.” With a revamped roster that includes additions Derrick Rose, Joakim Noah and Courtney Lee and returns Kristaps Porzingis under first-year coach Jeff Hornacek, Anthony and company will get a sturdy test against the defending champs on opening night. It will be a huge night in Cleveland as the Indians will open Game 1 of the World Series against the Cubs on the same night the Cavaliers get their rings. “The beginning of the season is always exciting,” Anthony said. “I think it’s a little bit more excitement due to the fact that we’re going to Cleveland. They are the champs as of right now, they get their rings. So I think as competitors, you kind of want that stage, you want that moment, to go in there and compete against them. We know it’s going to be a lot of excitement on their behalf getting their rings. “We just gotta withstand that, especially early in the game. They’re going to have a lot of adrenaline going, emotions, momentum so we gotta withstand that and play our game and enjoy this moment. It don’t come down to this one game and we gotta understand that.” Hornacek, too, is excited about a new beginning but knows what the ultimate goal is after the Knicks missed the postseason three years running. “We want to get this team back to the playoffs,” the coach said. Asked how many games he expects the Knicks will win, Anthony didn’t want to put a number on it. “Come on,” he said. “We 0-0 right now. I have no idea, I have no idea.” But he believes this may be the best team he’s had since he arrived in New York from Denver. “We feel good, we feel really good going into this first game,” he said. “We feel confident, not just about this first game but about where we’re at as a team and where we have an opportunity to go at so we’re excited about this moment and just getting the season going.” Anthony is especially excited to play with Rose, who is injury-free and was found not liable in his civil trial for gang rape and is arguably the best point guard Anthony has had in New York. “When you have a talent like that whose coming into a season with a clear mind and the focus that he has, he can be exciting,” Anthony said. As for the Cavaliers, Anthony is friendly with James, Kyrie Irving and former Knick J.R. Smith and will be happy to see them get their rings — even if he won’t. “On the flipside of things, man, just to see people that I call family celebrate something, an accomplishment at one of the highest stages, one of the highest honors, just to see those guys how happy they would be, as a friend, as a brother, I respect that,” he said. “And I’ll be happy for them. But then once it’s time to go, it’s time to go.” As for who’s he rooting for in the World Series, Anthony said with a smile, “I got an Oriole bird on my arm, man. I’m rooting for the Orioles.” Follow Adam Zagoria on Twitter And like ZAGS on Facebook