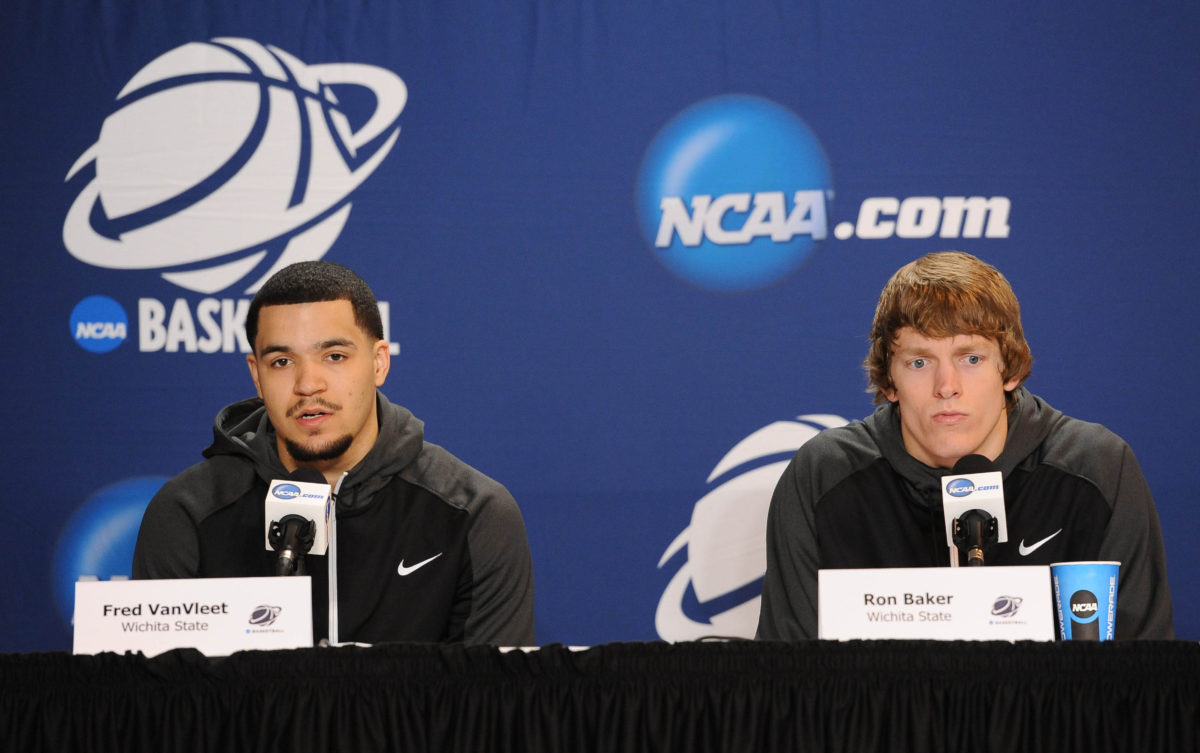 GREENBURGH, N.Y. — Ron Baker and Fred VanVleet both went undrafted in the NBA Draft last June. Now the two former Wichita State teammates will both be on opening-night NBA rosters — Baker with the Knicks and VanVleet with the Raptors. Each earned the 15th and final roster spot on his respective team. The NBA’s rookie salary is $543,471. “Oh yeah, we talked to one another,” Baker told me Monday ahead of the Knicks’ season-opener Tuesday night in Cleveland against LeBron James and the Cavaliers. “A lot of critics didn’t think we could do this. It goes to show Coach [Gregg] Marshall runs a really good program and a lot of things that he taught us has carried over to this league and how we work and how hard we play.” Baker, a former walk-on at Wichita State, hopes having two Shockers on opening-night rosters will help Marshall. “I think it’s great for the University and Coach Marshall, it’s a great recruiting tactic he can use now with Fred and I in the NBA that his program can produce these type of players,” he said. “I think high school kids will see that and give a little more focus on Wichita State.” Said Marshall: “I certainly think it could [help recruiting]. Neither of these young men were highly recruited yet they had the drive, toughness, intelligence and character to work at becoming the best they could be. We are so glad that we got to witness and play a small role in their development.” Baker averaged 7.0 points, 2.4 assists and 2.0 rebounds in five preseason games. He made 46.2 percent of his shots and 5 of 9 three-pointers. He beat out injured former Stanford guard Chasson Randle for the final roster spot. “Honestly, I didn’t really know what to expect, I was just trying to concentrate on the things that the game provided me to do to,” he said. “I could do the little things that I could do, and coming off the bench I didn’t have a lot of pressure to score the basketball. I focused on my defensive efforts and little things to help the team.” In Toronto, meantime, VanVleet earned the team’s final roster spot with his preseason play, and will serve as the team’s third point guard behind Kyle Lowry and Cory Joseph. He averaged 9.0 points and 2.6 assists in five preseason games, including 31 points against a team from Argentina. “I’m trying to stay in the moment, and I’m humble for the opportunity,” VanVleet told the Toronto Globe and Mail. “You work your whole life up until this point, and then you realize it’s just the beginning and you’ve got so much more to go.” Baker, whose family runs a cattle and dry land wheat farm in his hometown of Scott City, Kansas, got the news on Friday from Knicks President Phil Jackson and coach Jeff Hornacek, and proceeded to call his parents and his grandfather from his car at the Knicks training facility. “By the time I got off the phone with my grandpa 20 minutes later, everyone had found out so I wasn’t able to call my immediate family for the rest of the day,” Baker said. “[My grandfather] was excited, he took the day off from the farm and just kind of soaked it in. I think my family and hometown had a nice celebration without me there.”
Follow Adam Zagoria on Twitter
And like ZAGS on Facebook