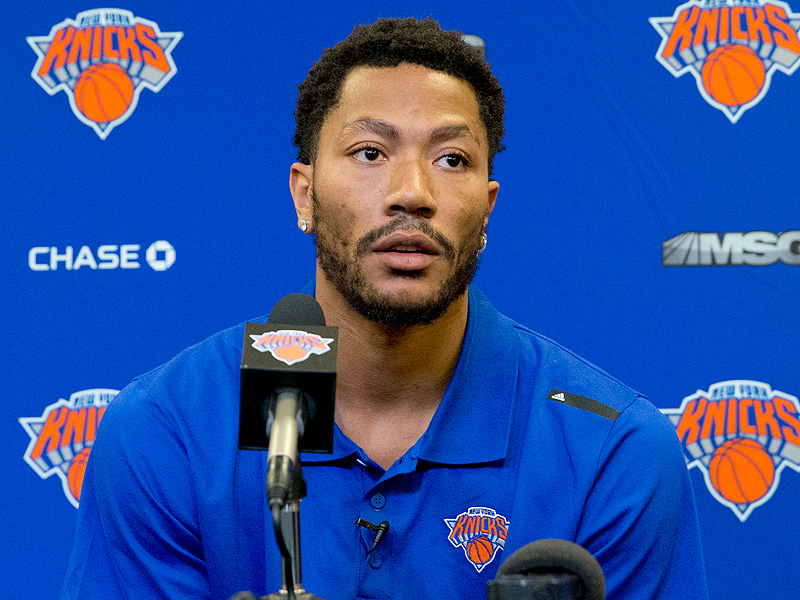 GREENBURGH, N.Y. — In his first public comments since he was found not liable in Los Angeles in his civil trial for gang rape on Wednesday, a relieved Derrick Rose said he’s praying for everyone who was involved in the case and that he’s confident and motivated going forward. After he missed two weeks of the preseason and five of six preseason games, Rose and the Knicks are set to open the regular season on Tuesday in Cleveland against LeBron James and the reigning NBA champion Cavaliers. “Oh man, it feel like heaven to be out there, man,” Rose said after practice on Saturday, his first since leaving for L.A. from Houston on Oct 5. “I got through my little situation but I’m happy to be focusing on nothing but basketball right now.”

Derrick Rose says he’s glad the trial is over and he’s focused on the future. pic.twitter.com/wHQHoZFYMk

Asked if he felt vindicated with the verdict that found Rose and his two friends not liable, he said, “A little bit but at the same time there was another person that was involved in this so if anything I just been praying for myself and praying for her because the issue is very big in the states and everywhere. So just praying for everyone that was involved and knowing that all this is out of my control. The only thing I could work on is being a better person, being a better dad, brother, cousin, uncle, being the best I could be so I could help others.” Much was made of Rose posing with jurors after the verdict. Asked if he felt after closing arguments that he was in good shape with the jury, he said he was worried about the outcome. “I just remember being nervous,” he said. “I didn’t have anything to do with the jurors wanting pictures, like they wanted the pictures. It wasn’t like I forced the pictures or wanted the picture to put it out there. They wanted pictures so I took a picture and that was all it was.” Rose said the worst thing about the trial was that he missed his son’s birthday. “The only thing that really hurt me was missing my son’s birthday party, missing his birthday and his birthday party,” he said. “Those were the two things that I was worried about the most. Not being there with my family, it hurt, and being there for my son.” Rose was able to work out every day after the trial, and said he’s motivated to help the Knicks make the playoffs after three seasons without postseason play. For the second year in a row, Rose missed all or part of training camp. He missed last year with an eye injury, but said he’s not worried about missing time again this year. He spent about an hour with the coaching staff on Friday. “To tell you the truth, I’m not [worried], man,” he said. “I’ve been preparing for this for a long time, since damn near we didn’t make the playoffs last year. I’m still chasing something right now. I just want to hoop and just let my game speak for itself.”

Here’s some video of Derrick Rose shooting jumpers back at #Knicks practice. pic.twitter.com/MEOA2wNySU

Knicks coach Jeff Hornacek previously said he was holding back installing some of the offense until Rose returned to the team, but Rose said he’s not worried about picking up the modified triangle offense. “Our biggest problem is defense right now, offensively we’re going to be alright but our defense has to be on point,” Rose said. “And everybody has to communicate while we’re out there. But I’m not worried about confidence on offense or anything. The main thing is our defense.” Hornacek said Rose looked good in practice and that he may work him into the offense by resting him at times. Asked if he could play starter’s minutes, Hornacek said: “We’ll find out. He looks in pretty good shape. It may be a situation where we put him in. If he looks like he’s tired, we’ll get him out and then get him back quickly. Maybe the rotation is a little different as he first comes back. But like I said, he looked in pretty good shape.” Hornacek said he’s not concerned about Rose facing hostility from crowds on the road. “Maybe…I think most guys get focused when they step out on that court on playing and they get involved in that and what the coaches want and the players and they don’t hear any of that,” he said. Follow Adam Zagoria on Twitter And like ZAGS on Facebook