For a Change, Iona & Manhattan Are the Hunters, Not the Hunted, in the MAAC | Zagsblog
Follow @adamzagoria 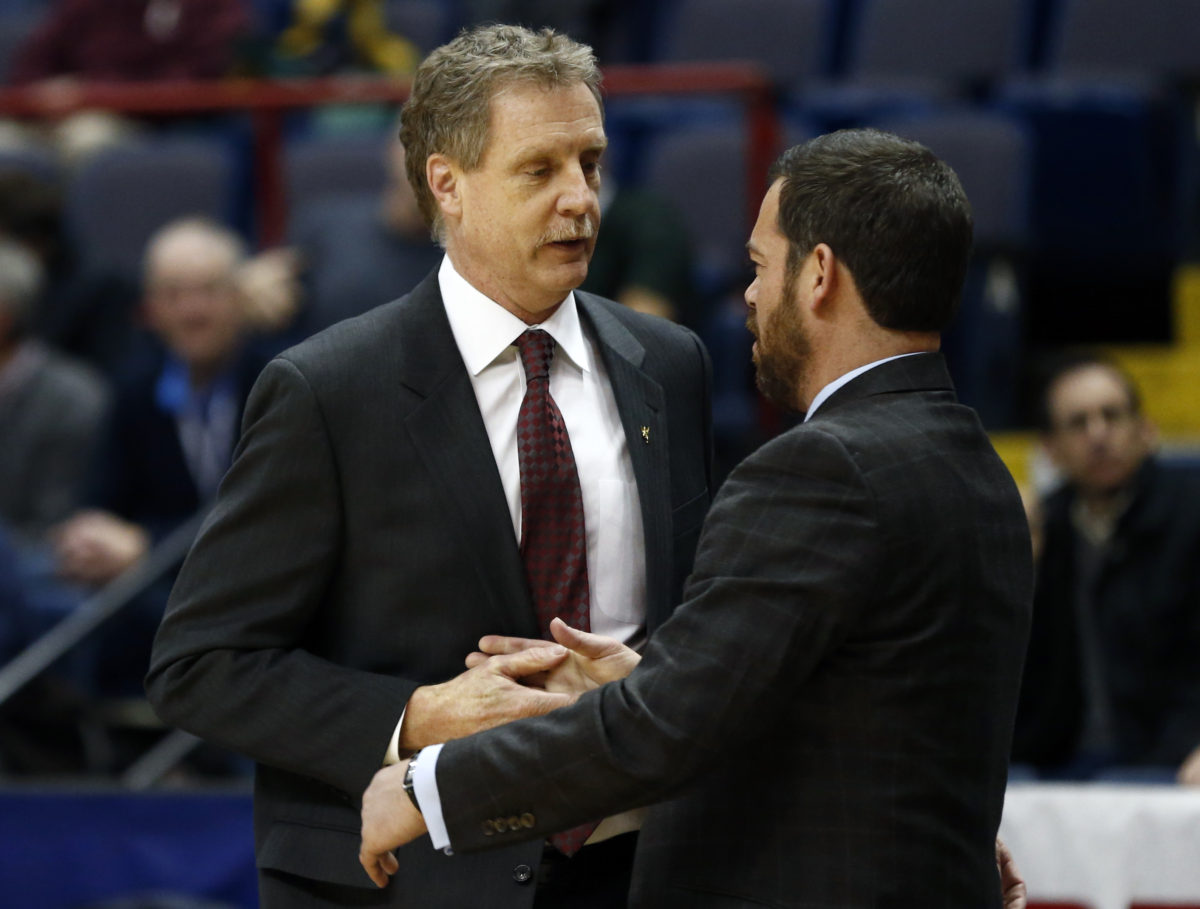 HEMPSTEAD, N.Y. — In four of the last five seasons, Iona or Manhattan has been picked atop the MAAC preseason rankings. In three of the last five, Iona has won the league’s regular season title. Niagara captured it in 2012 and Monmouth won the crown last season. For the last four seasons, Iona or Manhattan has won the MAAC Tournament title, with Manhattan garnering the league’s automatic bid to the NCAA Tournament in 2014 and ’15, and Iona doing so in 2013 and last year, when they beat Monmouth in the championship game. Get the picture? Iona and Manhattan have dominated the league of late. Yet this year, the league appears poised for change. With virtually all of its roster returning, Monmouth was named the preseason No. 1, with Siena at No. 2. and Iona at No. 3 Monmouth last year swept Coach of the Year (King Rice), Player of the Year (Justin Robinson) and Rookie of the Year (Micah Seaborn) honors. And all of those people are back. Iona and Manhattan will be the hunters this year instead of the hunted. “I think Monmouth and Siena both obviously are the favorites with all of the players they have returning and the seasons they’re coming off,” Iona’s Tim Cluess told me last week at New York College Basketball Media Day at Hofstra. “But I know our league is competitive from top to bottom and anything can happen on any given day.” Manhattan’s Steve Masiello thinks the expected change atop the league makes for added excitement. “I think that’s what’s going to make the league so much fun this year because on paper Monmouth and Siena return the most, should be probably two of the higher picked teams,” Masiello said. “But I still think Iona’s the defending champion. So I think that’s going to add some stories to the league which is going to make it fun, because now you’re probably circling three or four games on the schedule whereas in years past you were circling one or two. So I think that’s what makes it fun.” Between them Manhattan (eight) and Iona (seven) bring in 15 new players, so there are a lot of question marks with both teams. “I don’t think anybody knows what we have and what we don’t have,” Masiello said in a comment that could apply to both teams. “It’s kind of a little bit of a mystery team.” Still, both coaches are experienced, both have won and both like their teams. Manhattan adds former Cardozo guard Aaron Walker, the MVP of last January’s SNY Invitational, 7-foot-2 Ahmed Ismail, 6-10 Zavier Peart and 5-9 Ball State transfer Zavier Turner. “We got some size, we got some guards, we got some pieces,” Masiello said. Meantime, Iona lost four starters from last year’s NCAA Tournament team, including star guard A.J. English, but the Gaels as usual reloaded with transfers, including guards Jon Severe (Fordham) and Sam Cassell (UConn). Iona also gets back 6-8 senior forward Jordan Washington, 6-8 Tyrell Williams and 5-10 guard Schadrac Casimir, who practiced on Monday for the first time after missing last season with double-hip surgery. Two years ago, he averaged 14.5 points and shot 42.3 percent from beyond the arc, making 94 3-pointers en route to MAAC Rookie of the Year honors. He also broke a 34-year-old Iona rookie record by scoring 40 points against Delaware St. in his fifth college game. “Sam Cassell and Jon Severe are both playing well,” Cluess said. “It helps us with some leadership on the team with so many new guys because you’re not trying to break in a bunch of freshman who have no idea what it’s about. These guys have played against big-time teams in big-time games so they’ve been able to lead in practice, tell when guys aren’t working. Like a guy like Jordan Washington, if he’s not working hard enough, it’s coming from a veteran and they get on each other which is nice. “It’s almost as if you have senior leadership out of guys who weren’t in your program but they’re buying in and they like to play. They like the challenge, they want to have a special senior year.”   MAAC Preseason Coaches Poll  School (first-place votes) points 1. Monmouth (9) 119 2. Siena (2) 109 3. Iona 99 4. St. Peter’s 86 5. Fairfield 76 6. Manhattan 71 7. Rider 50 8. Marist 37 9. Canisius 35 10. Quinnipiac 28 11. Niagara 16 All-MAAC preseason teams First Team Jordan Washington, Sr., F, Iona Khallid Hart, Sr., G, Marist Justin Robinson, Sr., G, Monmouth (Unanimous Preseason POY) Brett Bisping, R-Sr., F, Siena Javion Ogunyemi, Sr., F Siena Second Team Tyler Nelson, Jr., G, Fairfield Rich Williams, Sr., G, Manhattan Micah Seaborn, R-Jr., G, Monmouth Kahlil Thomas, Sr., F, Rider Quadir Welton, Sr., F, St. Peter’s Third Team Phil Valenti, R-Sr., F, Canisius Deyshonee Much, Jr., G, Iona Antwon Portley, So., G, St. Peter’s Trevis Wyche, Sr., G, St. Peter’s Marquis Wright, Sr., G, Siena And like ZAGS on Facebook