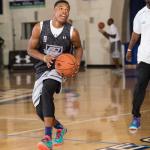 Dennis Smith Jr. recently cut his list to six schools — Kentucky, Duke, Louisville, N.C. State, Wake Forest and North Carolina — but is still actively talking about a package with Jayson Tatum and Harry Giles. Since Tatum has already committed to Duke, the package could only happen with the reigning NCAA champs. Duke went three deep for Smith Jr. this month in Georgia, but also kept tabs on 2016 point guard Frank Jackson. “Of course y’all know that I’ve talked in my blog about me, Jay and Harry [Giles] teaming up in college and that hasn’t changed,” he wrote in his USA Today blog. “It’s definitely something that we all still talk about and I’d say there’s still a great chance of it. “At the end of the day, I’ve gotta do what’s best for me, but, again, it’s something we still all talk about and it’s definitely the most serious package deal I have with anyone in my class.” Of course, Smith Jr. has also been linked to a package with Edrice “Bam” Adebayo headed to N.C. State. Meantime, Smith Jr. recently picked up a Kentucky offer and also talked about that. “I was definitely excited to get the offer for sure. It doesn’t matter that they’re just offering me now; they’re a team I’m considering as much as anyone. “Coach Cal mostly talks with me and my dad on three-way and we’re building our relationship pretty fast. It’s been cool.”

Calipari Wants Murray to Play For Canada, Says There is 'Drop-Dead' Date to Arrive at Kentucky