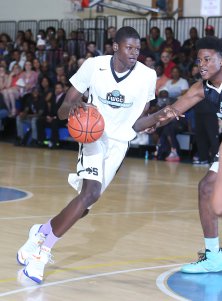 Mohamed Bamba wanted a Duke offer — and now he has one. The 6-foot-11 2017 star out of Westtown (Pa.) School and the PSA Cardinals has picked up an offer from the reigning NCAA champions, his AAU director, Terrance “Munch” Williams confirmed to SNY.tv. ESPN’s Adam Finkelstein first reported the offer. “I want that offer as much as I have any other offer,” Bamba told Josh Newman last week in New Jersey. “Although they do have a really great program, it’s sort of, not a finishing point, but it would be a great accomplishment if I get that offer.” Bamba also said he likes what Kentucky does with athletic big men. “What’s appealing is the guys who went to Kentucky that are sort of like me,” Bamba said. “The stretch four, a 6-11 shot-blocker. What’s appealing is how those guys can have a really effective year and go right to the league.” Dakari Johnson and Julius Randle are two more recent examples of John Calipari-coached players to not do four years in Lexington, but have a productive year or two and go on to be a millionaire.