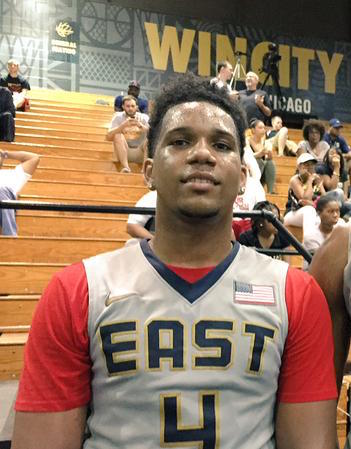 By RYAN FISH CHICAGO — For 2016 shooting guard prospect Myles Powell, playing at the Nike Global Challenge isn’t just about getting better as a player; it’s about showing everyone what he can do on the court. “This is probably the biggest event that I’ve been to so far,” Powell told SNY.tv Saturday. “Coming down here was a great opportunity. I wanted to come down here and show why I should be down here. I was a little upset because I didn’t get invited to the Nike Academy, so I wanted to prove I was one of the top players out here.” Powell proved just that on Saturday, dropping 30 points and shooting 6-of-9 from three-point range in his USA East squad’s 135-119 loss to USA Midwest in the Challenge’s third-place game. He was also named to the U.S. All-Tournament Team. The 6-foot-1 Powell will transfer to South Kent (Conn.) from Trenton (N.J.) Catholic for his senior year in 2015-16, he confirmed to SNY.tv. “I will be attending South Kent and I can’t wait to get there and keep proving why I’m one of the best guards in the country,” he said. “Myles is one of the top long-range shooters in the country,” South Kent coach Kelvin Jefferson said. “He can stretch the defense with his range but he has a good IQ and feel for the game. He can pass and crease easy baskets for his teammates.” Meantime, multiple colleges are pursuing him aggressively, including Marquette, Cincinnati, Kansas State, DePaul, Seton Hall and Rutgers. The Trenton, N.J. native says many would like to see him stay close to home and play for programs like Rutgers or Seton Hall. “Yeah, they want me really bad,” Powell said when asked about Seton Hall. “It’s close to home. I mean, my city would love me to go there, but if that’s the right choice when the time comes, then I’ll make that decision.” Powell echoed that sentiment about Rutgers. He indicated that he would go on more official visits and cut his list of potential schools down later this summer. Powell didn’t seem completely tied to the idea of staying on the East Coast, however, saying he was excited to visit campuses like Cincinnati and DePaul. “This is my first time in Chicago,” Powell said. “It’s beautiful out here and where our hotel is downtown. A lot of beautiful places.” Ultimately, a number of factors are important for Powell when considering where to go to school. “[It’s about] who I can actually see myself playing for,” he said. “Not necessarily a big school, I just want it to be a great fit for me. A place where my family can come watch me play, my family’s a big part of it.” Powell seems to be enjoying himself during this process, too. During the third-place game, he joked around and trash-talked with fellow U.S. All-Tournament team member and elite prospect Miles Bridges for much of the time on the court. “He’s like one of my best friends in the circuit,” Powell said. “We always joke about who’s the ‘real Myles’ and who’s the ‘fake Myles.’ Guarding each other like that was a real fun matchup.” Powell had a stellar game, but Bridges’ USA Midwest squad won to take third place at the tournament. For now, one thing is clear: both “Miles” seem to have a bright future ahead. Follow Ryan on Twitter