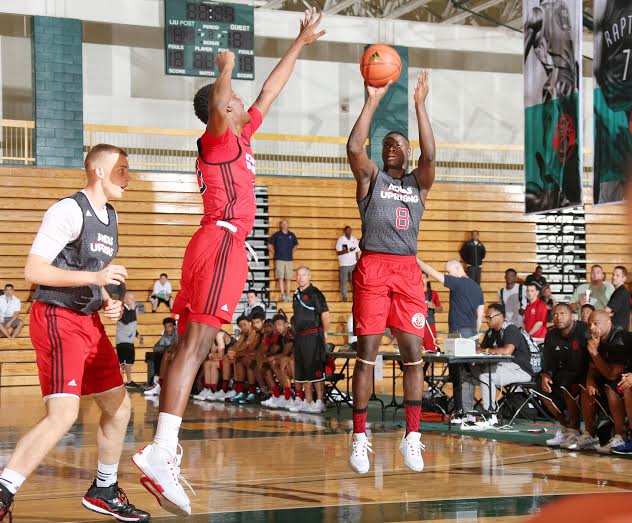 By JOSH NEWMAN BROOKVILLE, N.Y. – Rawle Alkins has maintained he will not choose a college until next spring, but one place he will visit is now known. Speaking after his opening game at the adidas Uprising All-American Camp here on Wednesday evening, the five-star shooting guard said he will visit the University of Kentucky for its Big Blue Madness on Oct. 16. Rapper Drake has performed at Big Blue Madness in the past, which Alkins admitted was appealing. “Calipari’s message, at the end of the day, he’s not too persuading and he’s just himself,” Alkins said. “What I like about him is, he knows his job. People want to go to his school. You get an offer from Kentucky, they’re gonna be in your top 5 no matter what, even if you’re not going there. “His resume speaks for itself. I see what he does, he knows what I do and he just gets it done.” With the Wildcats deep in the mix, so continues the full-court press to land Alkins’ services. Kentucky calls him “almost every day” and St. John’s and Indiana are “slightly” more involved, a source close to Alkins told SNY.tv. On a night the Red Storm were three-deep at LIU Post with Chris Mullin, Matt Abdelmassih and Barry ‘Slice’ Rohrssen present for his opening game, Alkins said he will narrow his choices down to five in the spring and will decide then. The St. John’s contingent made Alkins a priority upon arriving in April and the message to the former Christ The King star is clear. “I talk to Coach Matt and he’s the one that’s saying, ‘Be the next King of New York,'” Alkins said. “It will be a great story for New York if I lead them to March Madness, or even the Final Four. People will think New York is back, there’s a lot of talk New York is down.” Alkins’ college decision is not at the front of his mind just yet. For now, he will close out the month of July and the live periods, then focus on choosing a prep school. On July 2, Alkins tweeted he will head to prep school for his senior year after his eligibility at Christ The King ran out.  Follow Josh Newman on Twitter