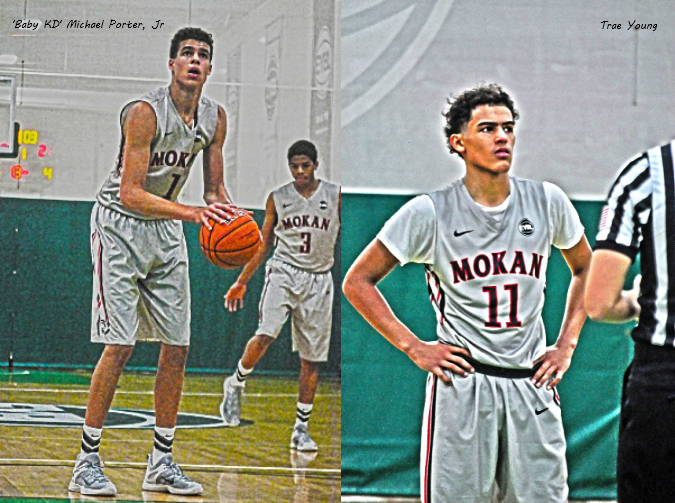 NORTH AUGUSTA, S.C. –– With their Mokan Elite team trailing the NY Lightning by one point late in an exciting game at the Peach Jam on Thursday night, Trae Young and Michael Porter Jr. showcased the connection that is increasingly making them an attractive package option for college coaches in the Class of 2017. Passing out of a double-team, the 6-foot-1 Young made a diagonal lob pass that perfectly hit the 6-9 Porter Jr., who elevated his long, athletic from for a lay-in that put Mokan Elite up for good, 68-67. “It was just a big moment,” said Young, who attends Norman (OK North. “I know where he’s at at all times and when I saw that no one was guarding him, I couldn’t believe it so I just threw it up and I knew that he would go get it.” Porter Jr finished with 22 points, 5 rebounds and 2 assists and his running buddy Young tallied 9 points, 7 assists and 5 rebounds as Mokan Elite improved to 1-1 entering Friday. The gym was full of coaches and onlookers, including Duke going three deep with head coach Mike Krzyzewski and assistants Jeff Capel and Jon Scheyer. “Our chemistry, it came quick,” said Porter Jr, who plays for Columbia (MO) Father Tolton. “The moment we met each other, it kind of clicked. Most point guards would not see that pass when they’re triple-teamed in the corner. He wouldn’t see that pass, but with our chemistry he’s always looking for me, I’m always looking for him.” The two have only been playing together since this spring on the Nike EYBL circuit, but already look like a well-oiled duo on offense. “We’ve been playing just this summer and we’ve been building a relationship that we feel we can go to the next level and play with each other and win a national championship,” Young said. “But that’s time’s a little bit a ways away, but right now that’s the plan, for us to play together.” Young says the two are often in touch via text message when they’re not playing together. “We like to laugh and joke,” Young said. “The way we act is the exact same. We have a great bond, that’s for sure.” It’s no surprise that colleges are already lining up to take the two as a package, similar to the way Tyus Jones and Jahlil Okafor announced together for Duke two years ago. As far as Duke goes, Young couldn’t help but notice Coach K and the Duke assistants sitting courtside. Neither could the two younger boys who asked Coach K for his autograph on their shirts before the game. “Yes, that speaks volumes, seeing all three of those coaches over there,” Porter Jr. said. “It for sure makes you feel good as a player.” “Yes, sir, I notice it,” Young added. “It’s crazy to see Coach K, the legend, one of the greatest coaches to ever coach the game sitting courtside watching me. But also me, I have to focus on the game and focus on winning and then that will all take care of itself.” Duke recently offered Young who took a visit there and was supposed to be accompanied by Porter Jr. “I actually visited about two weeks ago and Coach K offered me a scholarship face-to-face,” Young said. “They don’t offer very many kids so it’s definitely a blessing.” As for the visit, “I liked spending time with the coaches. They showed me campus. We walked around Cameron Indoor, spent some time in his office talking about stuff. It was fun.” Duke, of course, isn’t the only school trying to get in on the package. “I think quite a bit are,” Young said. “I mean Duke, obviously. Oklahoma, Missouri, Washington, Virginia, Kansas, UCLA, Arizona. Those are a few, but most of the schools that are recruiting me are recruiting him and vice versa.” Porter Jr. also echoed the package plan. “Most of the schools that are going after me are going after him,” he said. “And just seeing how we play together on the court now we feel we that it’s something we want to do if it works out, of course.” Porter Jr. listed Virginia, Washington, Missouri, Syracuse, Baylor, Oklahoma, Texas, Louisville, Arizona, Kentucky. “Those are some of them,” he said. Porter Jr. has other people in his ear, too. His old friend Kyle Guy is working on getting Porter Jr. to Virginia, as we wrote here. Porter Jr. recently visited Washington and Virginia but has no other visits planned right now. He says he has been invited to the Under Armour Elite 24 Game in Brooklyn on Aug. 22. For now, the duo plan to keep doing their thing at Peach Jam. “We know if we play to our full potential,” Young said, “we can beat any team in the league so now we just gotta show it.” Photo: USA Today