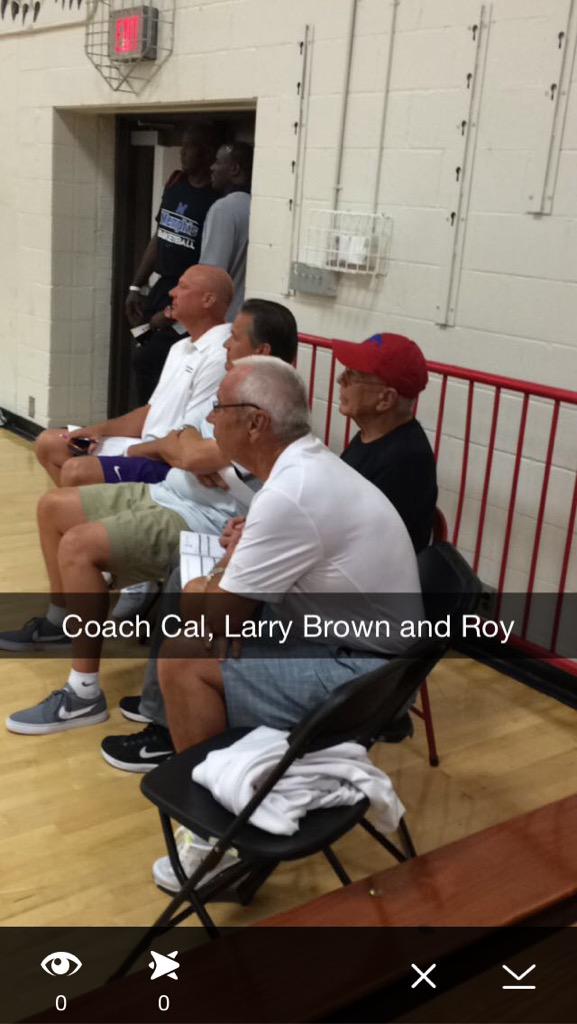 By JACK LEGWIN SUWANEE, Ga. — As expected, a legion of big-time Division 1 coaches turned out on the first night of the July live period in Atlanta to watch the NY Rens team featuring Rawle Alkins and Mustapha Heron at the Adidas Gauntlet Finale. Both players remain open in their recruitments, and are being targeted by a ton of big-time schools. Among the coaches on hand were Kentucky’s John Calipari, Duke’s Mike Krzyzewski, North Carolina’s Roy Williams, SMU’s Larry Brown, St. John’s Chris Mullin, Texas’ Shaka Smart, West Virginia’s Bob Huggins, Xavier’s Chris Mack, Alabama’s Avery Johnson and Pitt’s Jamie Dixon. With Calipari in the building, Alkins said after the win over Brookwood Elite that he likes the team that the Wildcats produce every year. “They’re a very good program,” Alkins told SNY.tv. “Obviously, he coaches a lot of one-and-done guys, top ten drafted guys, too. Coach Calipari, he’s a coach that has been there before. He knows what it takes.” In a previous interview with SNY.tv, Alkins said that St. John’s head coach Chris Mullin made him a priority as soon as he took the job. Mullin was in the crowd today. “Mullin offered me as soon as he got the job,” Alkins said. “They said that they wanted to keep all of the local guys home. They came to my school, three deep. Mullin, Slice, and Matt [Abdelmassih] were all there. They told me how they would love me at St. John’s, and I would be the guy there. I could help bring their program back. It’s interesting because St. John’s wasn’t really recruiting me before Mullin got the job.” Alkins said that he will be leaving Christ the King for his senior year, and will be attending a prep school. He says that the whole process has been overwhelming. “Every prep school in the world has contacted me,” Alkins said. “Oak Hill, Montverde, Huntington Prep, Brewster Academy, Elev8, Vermont Academy. It’s a big decision. I have to decide where I’m going to high school before I choose where I’m going to college. Location is not a factor for me.” The amount of schools that Alkins has been hearing from has gotten to the point where he doesn’t even respond. “Me not responding has gotten them to think that they don’t even have a chance,” Alkins said. “Especially now that it’s the live period, I’m just trying to focus on my game.” Alkins says that he does not have a timetable on a decision right now, but that the decision will come late in his senior year. “I will probably announce late,” Alkins said. “By that time I will have a list. I’m getting recruited by prep schools and colleges right now.” Rens coach Andy Borman told SNY.tv he expected Kentucky, North Carolina, St. John’s and Indiana, among many others, to prioritize Alkins in July.

First two people I see when I walk in are John Calipari and Chris Mullin. My guess is they’re here for Rawle Alkins