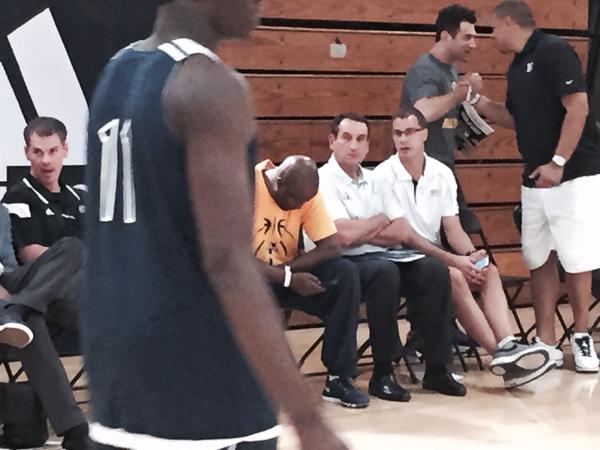 By JACK LEGWIN & ADAM ZAGORIA SUWANNE, Ga. — Duke went three deep for 2016 point guard Dennis Smith Wednesday night at the adidas Gauntlet Finale here. Duke head coach Mike Krzyzewski and assistants Jeff Capel and Jon Scheyer saw the 6-foot-3 2016 lead guard from Fayetteville (N.C.) Trinity Christian put up 18 points, 5 assists and 4 rebounds in a 61-57 win for Team Loaded over Stackhouse Elite. North Carolina coach Roy Williams, N.C. State coach Mark Gottfried, Stanford’s Johnny Dawkins, West Virginia’s Bob Huggins, Notre Dame’s Mike Brey, Pitt’s Jamie Dixon and Louisville assistants Ralph Willard and David Padgett were also among those in attendance, according to Legwin and Andrew Slater of 247Sports.com. https://vine.co/v/enxXmBdzm7Y Smith holds offers from Duke, Florida, Florida State, Kansas, North Carolina, N.C. State, Ohio State, VCU, and Wake Forest, among others. “Right now, I’d probably say Louisville is recruiting me the hardest,” he told SNY.tv in April. “N.C. State, Duke, Carolina, Kansas, Wake Forest, and Florida are probably the other schools I’ve been hearing from the most. Providence has been hitting me up lately, too.” Two programs that most figure will be in the thick of Smith’s recruitment until the end are in-state schools N.C. State and Duke. “I grew up an N.C. State fan,” he said in April. “So when I was offered by them, I was definitely excited about it and so were my parents. They want me to come in and run the show. I watched them last year and I was kind of iffy on it, but then I watched them this year and I watched them this year and I was really impressed.” As for Duke, Smith has discussed a possible package deal with fellow 2016 stars Jayson Tatum and Harry Giles, both of whom are playing this week at the Peach Jam. “My interest in Duke is pretty similar with the other schools, to be honest,” he said. “Tyus Jones leading them to a national championship was pretty neat, though. Duke usually has good point guard play.” Expect Smith to only consider programs where he’s built a tight-knit relationship with the program’s coaching staff. “I think the most important thing for me is relationships,” he said. “Whenever you go to a school, you’re basically asking the coach to be a father figure for a handful of years, so you definitely want to have a good relationship with the guy you’re going to be staying with.”   Photo: Team Loaded

Mustapha Heron Has a List, But It's Not Final (UPDATED)