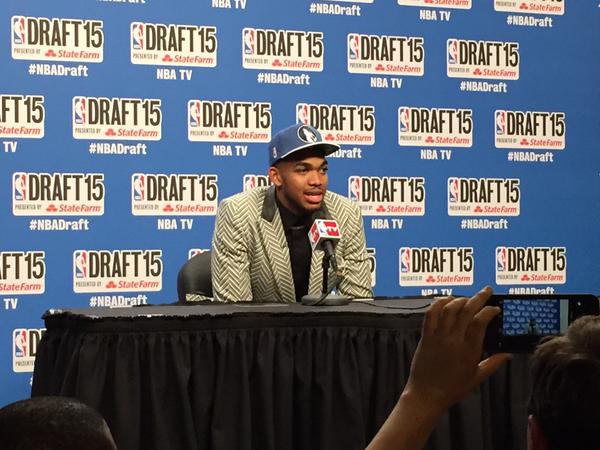 NEW YORK — The inevitable became reality Thursday night when the Minnesota Timberwolves selected Kentucky’s Karl-Anthony Towns with the No. 1 overall pick in the NBA Draft at Barclays Center. The 7-foot-Towns had long been projected as the No. 1 pick, and SNY.tv first reported on Monday that the Wolves had informed the Piscataway, N.J., native that they would pick him first. Towns celebrated with Kentucky head coach John Calipari, agent Leon Rose and some 40 family and friends, including his parents, Karl and Jackie. “For me, I’m just blessed to be in this opportunity to just show that a boy from Piscataway, New Jersey, can  [the] Dominican Republic can make it,” said Towns, whose locker will be next to Kevin Garnett’s in the Wolves’ locker room. “I’m blessed to be in this situation, to be in this seat talking to all of you. It just means the world that I’m going to be able to show kids around the world that with a little hard work, determination, a little bit of luck and some guidance, you can really make it far in this world.” Point guard D’Angelo Russell of Ohio State went No. to the Lakers; center Jahlil Okafor was selected No. 3 by the Philadelphia 76ers; the Knicks took 7-foot-2 Latvian Kristaps Porzingis at No. 4; small forward Mario Hezonja of Croation; Kentucky’s Willie Cauley-Stein went No. 6 to the Sacramento Kings. A product of St. Joe’s-Metuchen High School, where he won the New Jersey Tournament of Champions title and Gatorade National Player of the Year honors in 2014, Towns stands to make $5,703,600 in his first year, with a four-year deal worth $26,604,195. He becomes the third No. 1 pick on Minnesota’s roster, following Canadians Anthony Bennett and Andrew Wiggins. Towns is also the second Kentucky product to be selected No. 1 in the last four years, following Anthony Davis in 2012. And he is the second No. 1 pick from New Jersey since 2011, when the Cleveland Cavaliers selected former Duke and Elizabeth (N.J.) St. Patrick point guard Kyrie Irving. Towns arrived in the Twin Cities last Friday night and took a tour of the Wolves’ new $25 million practice facility and dined with owner Glen Taylor, President Flip Saunders and several other team officials. Towns said there was no promise and he didn’t know until NBA Commissioner Adam Silver called his named that he was the No. 1 pick. “They keep their cards really close to their chest,” he said. “I really had no idea. I just knew that I had faith that if I continued to work, I could possibly be in a position to be a top pick, but if I was to even fall to the 60th pick, I was going to be happy with trying to be in the greatest fraternity in the world, and that’s the NBA.” Minnesota also worked out Duke big man Jahlil Okafor, Ohio State guard D’Angelo Russell and point guard Emmanuel Mudiay, who played in China last season, but will Towns their centerpiece going forward.

“He likes Minnesota,” Kentucky’s John Calipari said last week on a conference call. “He said from Day 1, ‘I’ll go to Minnesota, let’s build a franchise.'” In Towns, Minnesota is getting a versatile, athletic, potentially franchise-changing big man who is also a high-character kid and a proven winner. He was the best player on a Kentucky team that won its first 38 games before losing to Wisconsin in the national semifinals, a devastating defeat for Towns, who had hoped to bring Big Blue Nation its ninth NCAA championship. “I just know that I’ve put a lot of work into the draft, I’ve put a lot of hours and I’ve done a lot of quality great work, working on my body and on my craft so no matter where I go I know that I have the confidence in me that I’ll be helping my teammates the most,” Towns said ahead of the draft on Wednesday. Towns spent several weeks before the draft training in Los Angeles with former UCLA star Don MacLean, who told SNY.tv he was “blown away” by the young man’s talents. “I’ve been doing this for 11 or 12 years pre-draft,” MacLean, the leading scorer in Pac-12 and UCLA history, previously told SNY.tv. “Because I had a lot of top 10 picks and a lot of really good players, I’m not really impressed or blown away. I had Towns all last week and I was blown away. Blown away. “A kid that big but shoots it that well but handles it that well and understands the game, that’s coachable, that wants to get better, wants to be great, I was blown away by him last week. “Am I a little biased? I’ve known Jahlil because I’ve done Adidas nations forever. Jahlil’s a great kid and a great player but I just think he doesn’t have as much to his game as Karl has.” Towns was known as a tremendous outside shooter at St. Joe’s, often slipping behind the 3-point line to let one fly when he wasn’t banging under the boards. Only down the stretch of his Kentucky career, did Calipari force him to become a low-post monster so that Kentucky could capitalize on his strength and skill in the paint. “Karl-Anthony Towns every night should get down on his knees and say a prayer to God to bless John Calipari, making him the first pick in the draft because he taught him how to compete,” longtime New York recruiting expert Tom Konchalski told SNY.tv. “He changed his body, he taught him how to compete, he totally reoriented his game to where he’s no longer this perimeter wannabe, not that he can’t step out and shoot threes. John Calipari has been a miracle worker with him, and he gets people to buy into a system that plays every in. Photo: Kyle Tucker / Courier-Journal   And Like ZAGS on Facebook