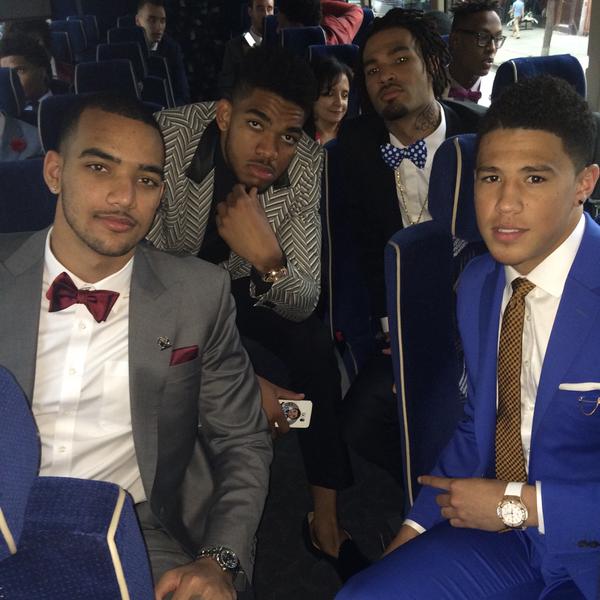 NEW YORK — Headlined by overall No. 1 pick Karl-Anthony Towns, Kentucky saw four players chosen in the NBA Draft lottery and six taken overall Thursday night. That tied the record Kentucky set in 2012, when Anthony Davis and Michael Kidd-Gilchrist went 1-2. After Towns, center Willie Cauley-Stein went No. 6 to the Sacramento Kings; power forward Trey Lyles was chosen No. 12 by the Utah Jazz; and shooting guard Devin Booker was selected at No. 13 by the Phoenix Suns. “Six guys get drafted and tie a record, four lottery picks and another No. 1 pick – it’s been another unbelievable night,” Kentucky coach John Calipari said. “I’m proud of the guys. Our job as coaches is to help these kids realize their dreams. I’m so happy that a lot of lives were changed tonight. I’m disappointed that Aaron [Harrison] didn’t get drafted, but he will be fine. I will tell you that he will be on a summer league team and fighting for a position on an NBA team. My guess is he will be on an opening-season roster even though he wasn’t drafted.” Point guard Andrew Harrison was chosen at No. 44 by the Suns but dealt to the Memphis Grizzlies, according to Yahoo Sports. Center Dakari Johnson, a Brooklyn native, was then taken at No. 48 by the Oklahoma City Thunder. Aaron Harrison was the lone Kentucky player to declare for the draft but go undrafted. “That just shows our team was special,” Lyles told reporters, referring to a team that won its first 38 games before losing to Wisconsin in the national semifinals. “Like none other.” Said Booker: “It’s unbelievable. It’s like the Karl situation. I was pulling for him to go No. 1. It’s because we’re teammates, we’re brothers and we developed that brotherhood at Kentucky. I’m just so proud of those guys.” According to beat writer Jerry Tipton, Kentucky has had 25 players drafted (19 in the first round) in Calipari’  six seasons as coach. Minnesota’s selection of Towns marked the first player taken by the organization in Kentucky’s program history. “This is what you live for,” Towns told ESPN moments after being selected No. 1 overall. “You want to give back to your parents. They give you the world and being able to wear this hat and show them their son is doing well in life and that I can take care of myself. All the work and dedication that they put into me and all the time that they sacrificed for me – I’m sacrificing back for them. It wasn’t for nothing.” The three No. 1 picks ties Duke for the most in NBA Draft history. Prior to Calipari’s arrival, the program had never had a No. 1 draft pick. Including Derrick Rose from Memphis, Calipari has coached four top draft picks, twice as many as any other coach. “I’m going to go in right away and just be as versatile as I can be,” Towns said. “I’ll contribute by giving Coach [Flip Saunders] any option he needs for us to win. That’s the one thing that I want Timberwolves fans to know is that I’m coming with a winning attitude. I just want to win. I’m not looking for individual success. I’m looking for the team to have success.” Towns said he enjoyed spending the time leading up to the draft with his Kentucky teammates. “You know what it’s been awesome,” Towns said Wednesday. “The biggest thing is, you feel so much more comfortable when you know people around you. Unlike back in the day, AAU has really brought all of us together in a way, so  we all are very close knit. We’ve all known each other. We’ve all meshed  each other’s personalities with each other so this is just a really cool time, when you have an event like this. “We all know each other at certain points from playing in college or playing AAU together and that’s awesome. That’s what makes this whole experience so fun.”   Photo: NBA And Like ZAGS on Facebook