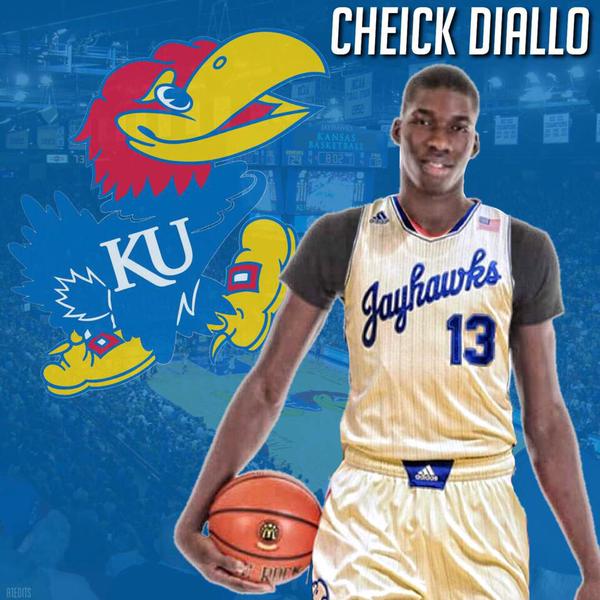 After missing out on several high-profile recruits in recent weeks, Kansas has struck in a big way. Cheick Diallo, the reigning MVP of the McDonald’s All-American Game and the Jordan Brand Classic, ended his recruitment by picking the Jayhawks over Kentucky, St. John’s, Pittsburgh and Iowa State. The 6-foot-9 Diallo, out of Our Savior New American High School and the PSA Cardinals AAU program, is the No. 6 player in the 247Sports.com rankings and is projected as the No. 14 player in the 2016 NBA Draft by DraftExpress.com. He has a 7-foot-4 wingspan according to DraftExpress.com, but has only been playing basketball since 2011 after growing up playing soccer in his native Mali. “Today is a huge day for our Kansas basketball program,” Kansas coach Bill Self said. “It has been our focus and our top recruiting priority to try to sign an inside presence and a rim protector to go along with our returning players. We feel like we’ve been able to sign a premier big man that has as much upside any big we’ve recruited in recent memory. Cheick reminds me so much of Thomas Robinson, late in Thomas’ college career. Cheick has a great motor. He runs as well as any big guy that we’ve had and certainly has a knack for finding the ball. He’ll bring a toughness and aggressiveness to our program. ” Diallo will join incoming freshman forward Carlton Bragg in Kansas’ 2015 class and will help offset the loss of Cliff Alexander, who declared for the NBA Draft. In the frontcourt, Kansas also returns leading scorer Perry Ellis, forwards Jamari Traylor and Landen Lucas and Arkansas transfer Hunter Mickelson. “With the addition of Cheick and Carlton and with what we have coming back, I think this puts us in a great position to be a much improved team next year,” Self continued. “We are still actively recruiting a few more players, but this could not have turned out any better for us with the two that we’ve signed.” St. John’s coach Chris Mullin and Kentucky coach John Calipari were the last two coaches to meet with Diallo, but apparently his meeting the night of the Jordan Game with Self made an impression. Self has coached a long line of future NBA big men, and that likely was appealing to Diallo. His decision ends a recent run of disappointment for Kansas. The Jayhawks this month have missed out on Brandon Ingram (Duke), Malik Newman (Mississippi State) and Stephen Zimmerman (UNLV). “Man, he’s got a high motor man, he’s like the Energizer Bunny, he just keeps going and going and going and going,” Jordan Brand coach Gary DeCesare, who watched Diallo go for 26 points and 11 rebounds in the Jordan Game, told SNY.tv “He’s a great kid, he just plays. I tell you what, he’d be an unbelievable get for whoever tries to get him. I love that kid, man. He just plays, goes out and does whatever you need him to do, man. When you got a 6-9 guy who’s the first guy down the court in transition, wow, that’s scary.”   Photo: AP