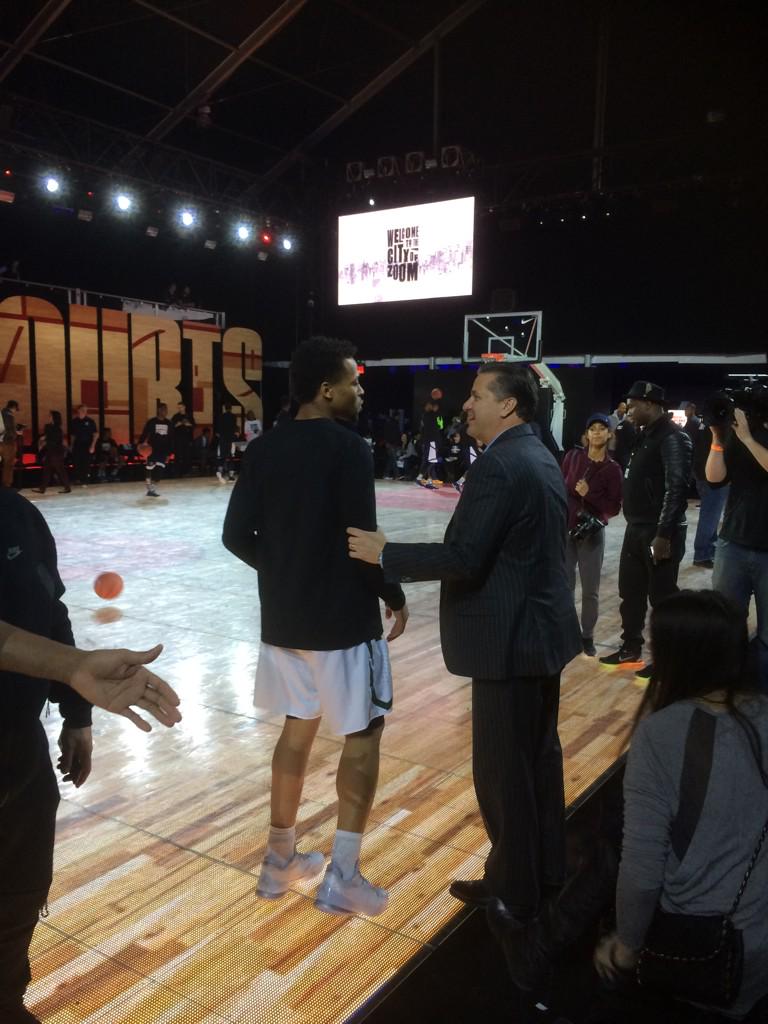 NEW YORK — Kentucky coach John Calipari and St. John’s coach Steve Lavin are among those expected on Sunday when Cheick Diallo and Our Savior New American meet Isaiah Briscoe and Roselle Catholic at the Nike Zoom Arena in lower Manhattan. The game will air live on Fox Sports 2 at 2 p.m., with a replay later on Fox Sports. Both the uncommitted 6-foot-9 Diallo and the 6-3 Kentucky-bound Briscoe are McDonald’s All-Americans. Diallo is coming off a 23-point dunkest Friday night in a rout of Linden (N.J.) at the Metro Classic at Kean University. “Tonight, their big kid [Diallo], we had no answer for him,” Linden head coach Phil Colicchio told Antonio Olivero of The Star-Ledger. “Our kids worked their butts off and we got after it defensively. But as we are rotating on defense the ball is up over our heads. We couldn’t stop that with a 6-foot-9 McDonald’s All-American.” In the nightcap on Friday, Briscoe went for 18 points in a loss to Ben Simmons and Montverde (FL) Academy. (Simmons and Montverde went 2-0 in their Garden State trip, with the 6-9 LSU-bound big man dropping 30 Saturday in a 67-62 win over St. Benedict’s Prep.) Diallo is down to Kentucky, Kansas, Iowa State, St. John’s and Pittsburgh and will commit in the spring. “Don’t sleep on Kentucky. Kentucky is calling Cheick every day,” a source close to him told SNY.tv. “Kansas is calling Cheick every day. Iowa State is working hard for Cheick. It’s going to be very hard for Cheick.” The source said Diallo is waiting to see which front court players leave and which stay from Kentucky. Karl-Anthony Towns, Willie Cauley-Stein and Trey Lyles are all projected first-round picks by DraftExpress.com, while Dakari Johnson is a borderline first-round pick. Meantime, Iowa State has been all over Diallo and this will be their third game watching him in the last two weekends. The source said Diallo has videos of all five schools from Synergy Sports to see where he might fit in. “We give it to the kid and he figures it out,” the source said. “Whatever the kid picks, that’s what he’s gonna do.” SEVERAL WORKING HARD FOR YAKWE

Kassoum Yakwe, a 6-7 2016 forward who went for 9 points in the Linden game, is a tremendous athlete who is being pursued by many of the same schools targeting Diallo. St. John’s, Syracuse, Iowa State, Villanova and Kansas are working hardest for Yakwe, the source said. Jonathan Givony of DraftExpress.com was at the Our Savior-Linden game and came away impressed by Yakwe’s athleticism. “He’s a freak athlete,” Givony said. “HE guards, he rebounds, he blocks shots. He has an amazing body with a long wingspan. There are not many guys in college with those physical attributes. If he develops a reliable corner 3, he is going to be an NBA player.” BELEIEN SEES BATTLE Michigan coach John Beilein was on hand Saturday when 2016 Gill St. Bernard’s guard Tyus Battle went for 24 points and 6 rebounds in a victory. “Beilein said he is a perfect fit for Michigan,” Gary Battle said. Louisville head coach Rick Pitino and assistants from Notre Dame and Villanova saw the 6-6 battle earlier this week. Notre Dame head man Mike Brey is due back to see Battle. Battle is down to 11 schools, including Duke, Kentucky, Ohio State, Michigan and Syracuse, but plans to cut his list again. ST. JOHN’S TARGETING FOREIGN TALENT

St. John’s coach Steve Lavin is once again targeting international talent to replenish his roster next season. Thomas Akyazili , a 6-2 combo guard from Belgium, will be at St. John’s game Monday night against Xavier. Colorado, Davidson, Rhode Island, Iona, UAB, Charlotte, Creighton, San Jose State and Utah are also interested in the Belgian point guard born in 1997, per Sportsando. Meantime, St. John’s offered 6-10 Lauri Markkanen of Finland, who is in New York this weekend for the Basketball Without Borders Global Camp. For more, read here. KYLE ALEXANDER SHUTTING DOWN VISITS Kyle Alexander, a 6-10 2015 forward from Orangeville Prep (Ontario), did not end up visiting Pitt this weekend and is no longer considering them. His most recent visit was to St. Bonaventure and his father says they won’t take any more visits until “late March.” Alexander recently had another cast on his wrist and has been out of action. The cast comes off March 12. Photos: (Chris Russell; Alex Remnick | NJ Advance Media for NJ.com)