NEW YORK — A slew of NBA executives and scouts are on hand at Manhattan’s Baruch College this weekend for the first-ever Basketball without Borders (BWB) Global Camp. College coaches are not permitted into the camp, which is being run by the National Basketball Association (NBA) and the International Basketball Federation (FIBA) and features 39 campers from 23 countries. The camp will become an annual All-Star tradition. The campers, ages 16-18 and coming from Africa, the Americas, Asia and Europe, are training with select NBA and FIBA players and coaches including Danilo Gallinari (Denver Nuggets; Italy; BWB Europe 2003), Gorgui Dieng (Minnesota Timberwolves; Senegal; BWB Africa 2009), Steven Adams (Oklahoma City Thunder; New Zealand), and Tiago Splitter (San Antonio Spurs; Brazil). “We watch [the players],” Toronto Raptors GM Masai Ujiri said Saturday morning. “How many times you get to see kids like this? We continue to watch them develop and you see them in other tournaments. But if you can see them in places like this where you can see them do skill development, it’s really good for scouts.” We already focused on Canadian point guard Jamal Murray here. Here’s a brief rundown on several of the other top performers so far with a focus on their plans for the future, including potentially playing college basketball in the U.S. ISAAC HUMPHRIES, AUSTRALIA

The 7-foot Humphries burst onto the scene this summer while playing for the Australian U17 team that won the silver medal at the World Championship, losing to the USA in Dubai. He also played for the Australian Institute of Sport, which has featured Dante Exum and other young Australian stars. He arrived in the U.S. at La Lumiere just before Christmas. Here he is playing alongside Murray and 7-footer Dragan Bender of Croatia, projected as the No. 13 pick in the 2016 NBA Draft by DraftExpress.com. “It’s been really good so far just being able to come back together and play against the different styles,” Humphries told SNY.tv. “Similar to Worlds, some of us remember each other from Worlds, so it’s good to see your competition from around the Worlds.” As far as colleges, Humphries said “Duke, Kentucky, Kansas, Michigan State and UCLA “are recruiting me the hardest at the moment.” (Duke and Kentucky have yet to offer.) He said he hopes to decide “around November just so I can enjoy my last season without worrying about all that sort of stuff.” He plans some visits before then but has none in mind. “Yeah, I’ll probably visit later on in the year,” he said. Humphries is uncertain if he will play with the Australian U19s this summer. “It’s on the cards for me but I haven’t made any decision yet,” he said. “School’s really busy and there’s AAu  and going home to see family and stuff like that.”   LAURI MARKKANEN, FINLAND 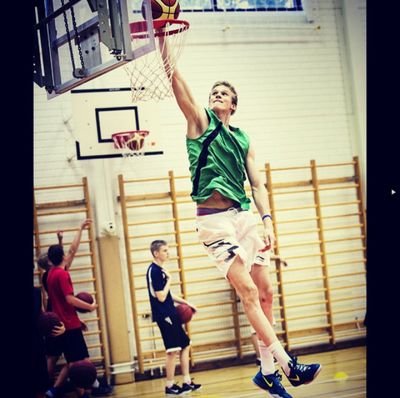 Markkanen is a very skilled 6-10, 214-pound face-up big man who can shoot and has played very well at the camp. He is considering entering an American college for 2016. “I finish my high school in Finland, maybe a year and a half left, and then I’m going to college,” he said. Markkanen said North Carolina is “the biggest one” recruiting him, and that Utah, Florida, Texas A&M and St. John’s are also in the mix. “Those are my options right now,” he said. “I heard that Duke is interested in me, but I don’t know,” he said. “North Carolina is the biggest.” He said he plans to take visits “next fall to a few schools,” but “doesn’t know much about them.” “They will call me next week and tell me about them,” he said, adding that St. John’s specifically will call him. “My coach Hanno Möttölä, he has all of the contacts and he just sends my game video to coaches.” Mottola was the No. 40 pick in the 2000 NBA Draft and Markkanen hopes to follow him. “NBA of course, make a career,” he said. “[I need to] work hard every day, get more physical. Every part of my game, I need to develop.”   JACOB LARSEN, DENMARK A skilled 6-10, 240-pound center from Holte, Denmark, Larsen is only 17 and would go to college in 2016. He says he’s enjoyed the camp so far. “It’s a great experience to meet players from all around the world and coming together and play good basketball,” Larsen told SNY.tv. Larsen said he’s considering coming to the U.S. for college and is being recruited by Duke, Maryland and George Washington, among others. “Yeah, I’m considering the college way,” he said. “I like it here in America and just like any first-division basketball college would be great.” He added: “Duke, Maryland, George Washington, all kinds of schools.” Larsen says he hopes to decide his future plans soon. “Pretty soon I think because if I want to go to the European way, it’s a decision I have to make real soon,” he said. Wherever he goes, Larsen plans to be a “hard-working player both defensively and offensively. And doing my part whatever the coach wants.”