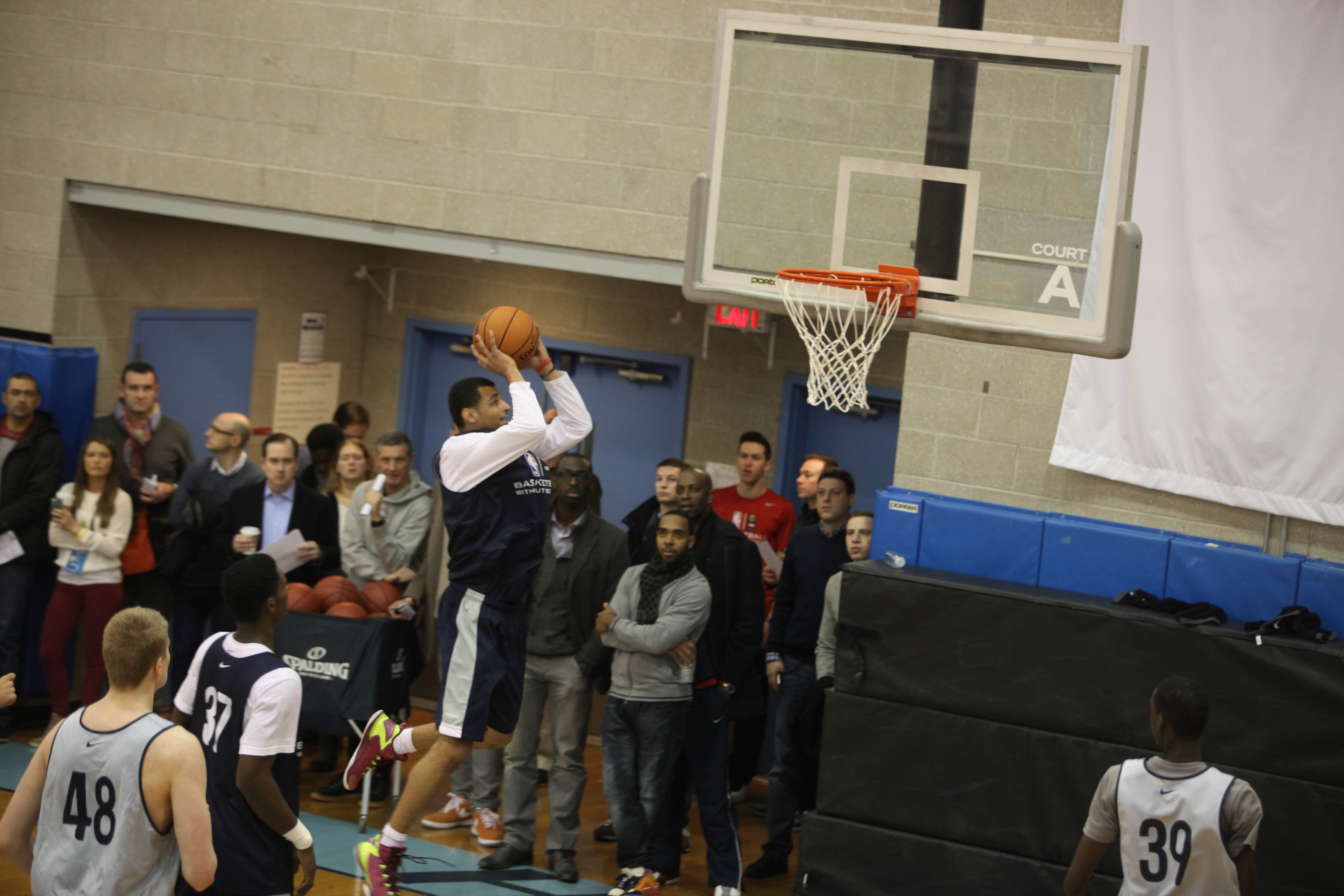 NEW YORK — Jamal Murray, the 6-foot-5 lead guard from Orangeville Prep (Ontario), has arguably been the most impressive guard at the Basketball Without Borders Global Camp at Manhattan’s Baruch College. “He has it all,” one of the many NBA scouts in attendance for the three-day camp told SNY.tv. Jonathan Givony of DraftExpress.com Tweeted, “Jamal Murray is getting better and better. Making some great passes here, playing at different speeds, active on defense. And what a stroke.” College coaches are not permitted into the camp, which is being run by the National Basketball Association (NBA) and the International Basketball Federation (FIBA) and features 39 campers from 23 countries, including four Canadians. Murray, who was not made available to the media, is familiar with AAU-type settings from his time with Canadian power CIA Bounce and had no trouble taking charge of a team that includes potential future pros in Croatian 7-footer Dragan Bender and Australian 7-footer Isaac Humphries. “Every time I see him, there’s just one little thing that seems to have gotten better, whether it’s his body or finishing or passing and so that’s always good to see development in someone’s game,” Mark Bayne, Nike’s Canadian rep and a guru of Canadian grassroots basketball, told SNY.tv. “I think a lot of [NBA] people have felt the same thing, that he’s improved from Hoop Summit [in 2014],” Bayne added. “I think a lot of people were surprised last year that he did so well at the Hoop Summit and seeing him now again, he still looks very good.” While there has been much speculation that Murray could opt to reclass to the Class of 2015 from 2016, his father says right now the plan is to remain in 2016. “As for now he’s 2016,” Roger Murray told SNY.tv. “If everything lines up for 2015, so it be.” As far as recruiting, Roger said he’s talking to “10-15 schools,” including Michigan, Michigan State, Illinois, Louisville, Missouri, Indiana, North Carolina, Oregon and Wake Forest. Other schools, like Pittsburgh, have recently offered Murray. Although the family has not publicly mentioned this option, it’s also possible that Murray could finish up at Orangeville Prep in 2016 and then go straight to the NBA from Canada without going to college. “For now we’ll see what the future holds and we won’t get ahead of ourselves,” Roger said. Either way, Murray made a unique decision by opting to stay home to attend Athlete Institute and compete for Orangeville Prep as opposed to going South for high school to a place like St. Benedict’s Prep, Huntington Prep or Findlay Prep. “He could be one of the first to really make it by staying home,” Baynes said. “Especially in this new generation where everyone’s leaving and going down to the States and playing there, he could be someone who’s a game-changer.” Canada has produced back-to-back No. 1 NBA Draft picks in Anthony Bennett (Findlay Prep/UNLV) and Andrew Wiggins (Huntington Prep/Kansas), as well as numerous other players, including Tristan Thompson, Cory Joseph, Kelly Olynyk and Tyler Ennis. Murray appears to be the next in line of strong Canuck ballers en route to the NBA. “I think so, I think so,” Baynes said,  “as long as he stays on the path and puts in the work.” Photo: NBA