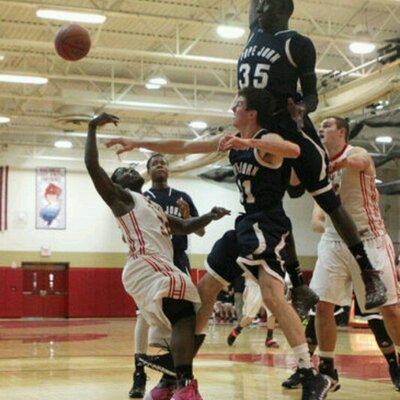 By CHRIS RUSSELL NEWARK — Syracuse may not make the NCAA Tournament this season, but Moustapha Diagne hopes to help the Orange get there next year. “I’m trying to get good every single day, improve my jump shot, make a 15-foot face up, playing strong and physical,” the 6-foot-9, 245-pound forward told SNY.tv after Pope John XXIII (N.J.) beat University, 72-40, in the Newark National Invitational at the Prudential Center on Sunday. In the fall, Diagne will join a frontcourt that could feature the returns of Chris McCullough and DaJuan Coleman. Both are injured and done for the season. Diagne possesses good athleticism and has exceptional rebounding skills. With a solid back-to-the-basket offensive game, he does a good job owning the paint and does not shy away from contact. He will join fellow four-star recruits Malachi Richardson (Trenton, N.J.) and Franklin Howard (Fairfax, VA), both guards, and forward Tyler Lydon (Hampton, N.H.) This season’s Syracuse team (14-6) could be on the brink missing this year’s NCAA tournament. Inexperience at the point guard position and inconsistency in the interior have been some of the glaring issues for the Orange this season.  According to Joe Lunardi’s bracketology, Syracuse is currently listed among the “Next Four Out.” Despite the on-the court struggles, head man Jim Boeheim is working hard to build future success. Syracuse currently sits at No. 4 in the 2015 recruiting class rankings according to ESPN.com. “Yeah I spoke with coach Boeheim on Sunday,” Diagne told SNY.tv after the game. “They are flying out to see me play on Tuesday and they always call to wish me good luck, we talk every other day.” (Weather may change those plans.) Against University, the talented forward from Senegal struggled to find his rhythm offensively, scoring his first basket in the fourth quarter and finishing with just 6 points. He did create havoc in the interior while registering 16 rebounds, helping Pope John XXIII improve to 13-1 on the season. “Didn’t play a good game, I didn’t play my best game but I’m glad we won it,” said Diagne. Before choosing Syracuse, he drew attention from Memphis, Cincinnati, Villanova, Ohio State and UConn. “It’s a great fit,” Diagne told SNY.tv of Syracuse. “Next year when I go up there, I’m going to try to help them in any way that I can, like rebounding and blocking shots, the little things. “It’s a good school, they have a good basketball program, Diagne added. “And coach [Adrian] Autry, we built a good relationship and I feel comfortable with Syracuse.” Follow Chris on Twitter