By ADAM ZAGORIA & ZACH SMART Less than a week after losing out on Roselle (N.J.) Catholic guard Isaiah Briscoe, St. John’s landed its first commitment in the Class of 2015 when Philadelphia Math, Civics, & Sciences combo guard Samir Doughty committed to the Johnnies. St. John’s coach Steve Lavin had hoped Briscoe would be the building block to a huge class for 2015 that must replace six graduating seniors. “Style of play and great coaching,” the 6-foot-4, 182-pound Doughty told SNY.tv of why he picked St. John’s over Penn State and Seton Hall. “That’s what I really like about it. And they play at [Madison Square] Garden.” Doughty, who is close with fellow Philadelphia product Rysheed Jordan, a sophomore at St. John’s,  said he hopes Jordan leaves for the NBA after this season. “He’s a close friend,” Doughty said. “If we play together we’d be real good. It would be a lot better if he do stay around. [But] I hope he can make it to the NBA after this season. “It would be real good if he stays, but I’m hoping he goes and lives his dream by playing in the NBA.” Kamal Yard, Doughty’s mentor who also mentored Jordan, said St. John’s is getting a play-making guard who can score. “This kid is an under-rated player,” Yard SNY.tv. “Most national publications have him in the 120s but this kid I believe is a top-40 player. He can really score the ball. He’s got really good one-on-one skills. It’s tough keeping him out of the lane. He’s got a great handle but his biggest attribute is his overall playmaking skills. “When the shot clock is winding down, just let him go make a play for himself and his teammates because he excels that.” Sources said St. John’s is looking to sign another 3-4 players in the spring and then another 3-4 in 2016. Much will depend on whether Jordan and/or junior big man Chris Obekpa return. MONTERO TO USF

Luis Montero, a 6-9 forward from Westchester (N.Y.) Community college committed to Orlando Antigua and USF. “I know the coach can take me to the next level,” Montero told SNY.tv by text. “I made the best decision for me and my family.” A source said that Montero is expected to qualify despite the WCC transcript scandal that caused four D-1 commits from that school to be ineligible, including former St. John’s forward Keith Thomas. It’s not hard to imagine the NCAA reviewing his transcripts, however. Montero’s high-major appeal is most notably linked to a diversified folder of tools. He’s a threat to dial in from beyond the arc. He can dice defenders off the dribble. He can score consistently via self-creation, with a knack for splitting into the driving lanes and finishing at/above the rim. He’s become more adept as a passer and creator. WCC coach Tyrone Mushatt said it would be a disservice not to have the ball in his incoming go-to-guy’s hands as much as possible. And what to say of Montero’s considerable wingspan, those Pippen-long arms that seem as long as stickball bats? “He’s a better defender than people think,” Mushatt. While his identity is that of an electric offensive threat with a janitor’s supply of hard-to-guard tools, Montero still has just 16 JUCO games under his belt. He averaged 15.6 points, 5.9 boards, and 3.0 assists in 16 games as a freshman, erupting for 31 points during a wire-to-wire 113-86 bludgeoning of Rockland Community College. He scored 20 points, shooting the rock at an 8-for-13 clip, during a win over Harcum College. Montero dropped 19 points on 7-for-11 FG during the Vikes’ final game of the regular season, an 82-70 win over Baltimore City Community College. PRITCHARD TO OKLAHOMA 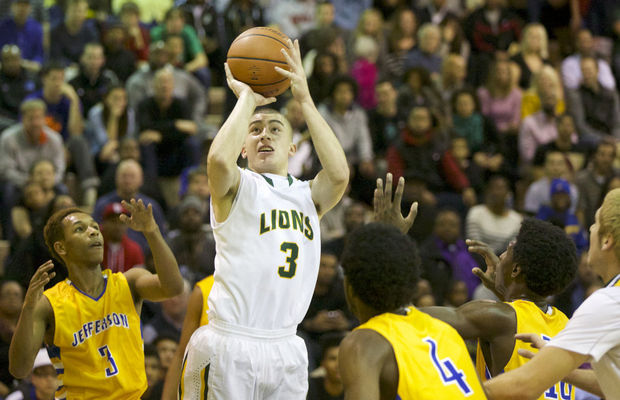 Payton Prichard, a 6-2 junior point guard from West Linn (OR), committed to Oklahoma over Gonzaga, Oregon, Villanova and Wisconsin, according to OregonLive.com. “They are going to give me a chance to play early and have a big role as a freshman,” Pritchard told the paper. “They play in a big conference, I love the atmosphere and I have family there, so that’s a bid deal.” He added: “I think I fit their system, because I can push the ball. They really get up and down and they shoot a lot of threes. I feel like that is a strength of mine. Also, the freedom to be able to run the offense is a big thing and Coach (Lon) Kruger has confidence in me to be able to be the floor general.” Pritchard is ranked No. 46 by ESPN.com in 2016. Photos: COBL.com, OregonLive.com

What if the Kentucky Wildcats Played the Philadelphia 76ers? What about Michigan State, Duke or Kansas?