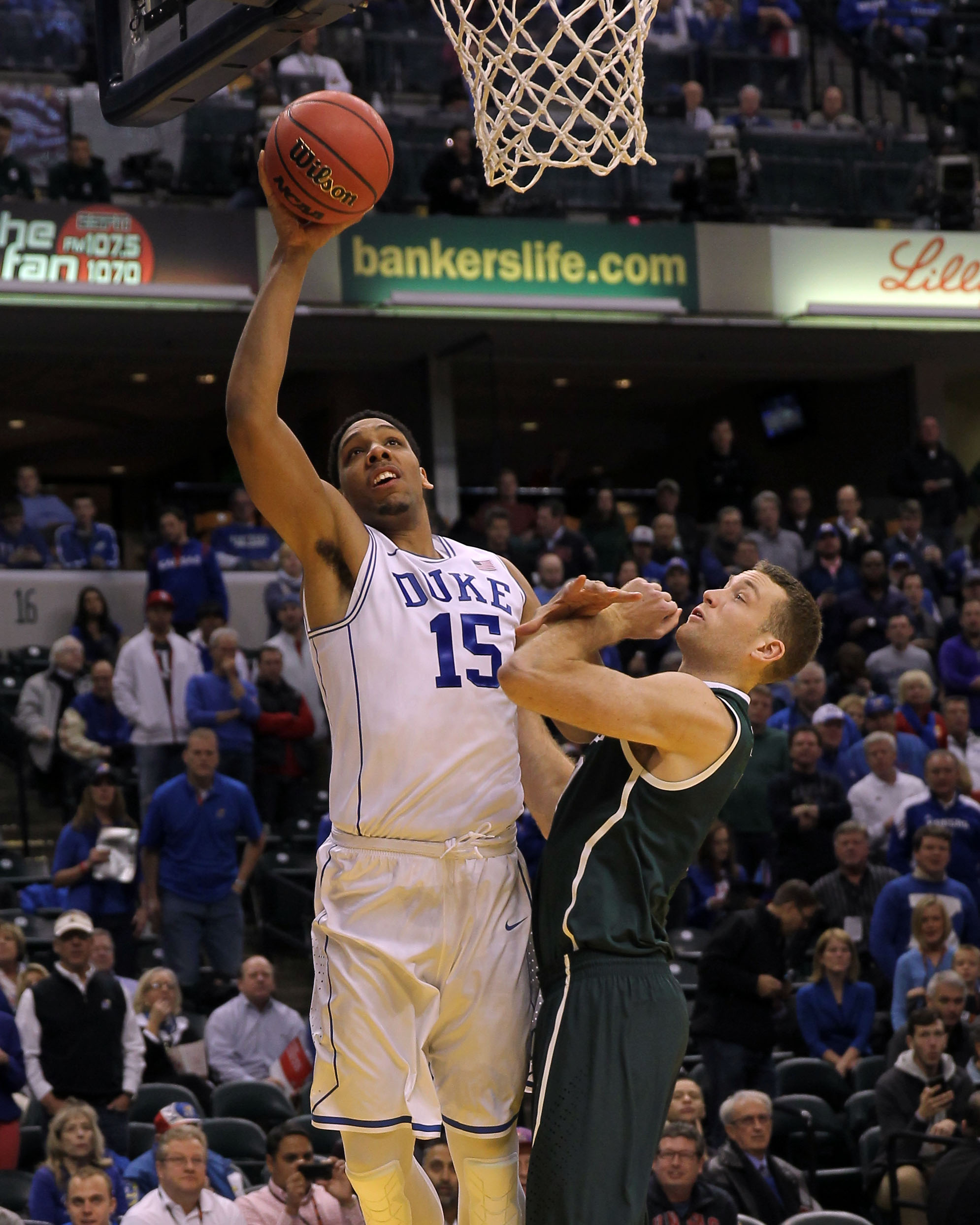 INDIANAPOLIS — We were just a couple minutes into Duke’s 81-71 victory over Michigan State in the Champions Classic, and it wasn’t hard to see why Jahlil Okafor is the projected No. 1 pick in the NBA Draft. It wasn’t hard to see why more than 60 NBA personnel, including a handful of GMs, were on hand at Bankers Life Fieldhouse. Sure, there were 11 projected first-round picks according to DraftExpress.com on the docket that also featured Kansas-Kentucky, including Duke freshman wing Justise Winslow (15 points, 6 rebounds, 3 assists) and Duke freshman point guard Tyus Jones (17 points, 4 assists), who both played extremely well. But Okafor was Attraction No. 1. He is the reward for really bad NBA teams like the Philadelphia 76ers and Los Angeles Lakers, who may want to “Lose Some More for Okafor” or “Forget How to Score for Okafor” the more the season goes along. Within the first few minutes, the 6-foot-11 Duke big man had outscored Sparty, 8-6, utilizing three hook shots on spin moves to the rim. Michigan State’s Matt Costello and Gavin Schilling, both 6-9, were no match for Okafor, who finished with 17 points on 8-for-10 shooting, 5 rebounds, 2 blocks, 2 steals and 1 assist despite foul trouble in front of a crowd that included Paul George, Kemba Walker, Michael Kidd-Gilchrist and Worldwide Wes. “I like the way he plays,” Walker, the Charlotte Bobcats point guard out of New York City, told SNY.tv. “So far he gets great position on the offensive end. He has great pace, nice touch, nice hands. I think he will be good. Of course, he has to get a lot stronger and adjust to the NBA game.” 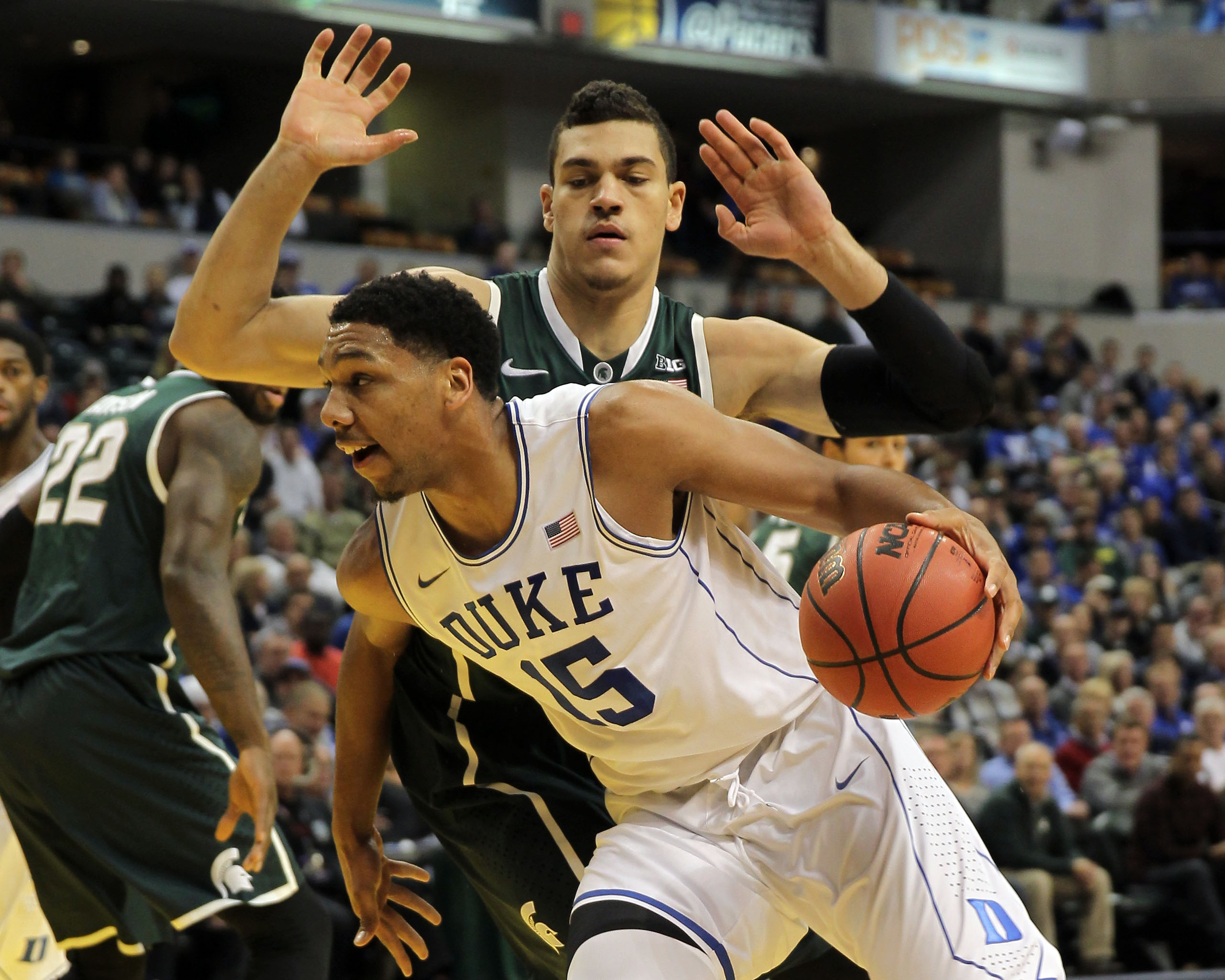 Asked if he sees Okafor as the potential No. 1  pick, Walker said, “Yeah, I can see that. I still think he has some developing to do but he’s young. I think he has a lot of potential.” Tim Duncan played four years at Wake Forest before becoming the No. 1 overall pick in the 1997 NBA Draft. Okafor, who lost his mother, Dacresha Benton, when he was just 9, will likely spend only this season at Duke before potentially becoming the No. 1 pick in 2015. In that regard, the two big men may not be comparable. But in terms of their games and skillsets, Okafor is increasingly drawing comparisons to the future Hall of Famer with five NBA rings. “Yes,” one veteran NBA scout in attendance said of the Duncan/Okafor comparison. “He has an old-school game. He really knows how to play around the basket. Sets his man up leaning one way, then goes the other.” “Okafor’s got some pretty good size and he doesn’t know how big he is yet,” ESPN college basketball analyst Shane Battier, a two-time NBA champion, told SNY.tv. “But he’s got tremendous skill…He does a great job of passing out of the post, which is a lost art. He reminds me of Tim Duncan, who I think is the best post passer in the NBA right now.” Both Mike DeCourcy of The Sporting News and Jon Rothstein of CBSSports.com have made the Okafor/Duncan comparison before and now Battier, the former Duke star, is also buying in. “I can’t remember a player in the Duke system like Jahlil,” Battier said. “He has amazing touch for a big guy. You don’t see big guys in college basketball anymore. You don’t see centers who can catch the ball on the block and make a post move and score. And Okafor has an amazing array of moves. He’s got a right hand, he’s got a left hand, he’s got a spin move, but I think his best attribute right now is his ability to pass.” Okafor should have little trouble adapting offensively to the NBA, but will need to work on his defense, especially as a rim protector. Still, Walker was impressed with how verbal he was on the defensive end. “I seen him talking back there, making the right call for the pick-and-roll,” Walker said. “That’s the first step on defense, is the communication.” Still, with his overall package, Battier, who spent the last several years playing with LeBron James, Dwyane Wade and Chris Bosh, is projecting a long and flourishing NBA career ahead for the Duke big man. “He’ll be a player,” Battier said. “He’ll be an offensive force to be reckoned with. He needs to learn how to play defense. And in college the rules are really disadvantageous toward big guys. You’re not really allowed to be physical as a big defender. Any physical play you’re going to foul out. You’re allowed to be a lot more physical in the NBA, but he’ll figure that out. “What you can’t teach is the soft hands and the touch and the ambidextrous nature of his game. So he’ll be a good player for a long time.” Photos: US Presswire