What if the Kentucky Wildcats Played the Philadelphia 76ers? What about Michigan State, Duke or Kansas? | Zagsblog
Follow @adamzagoria

What if the Kentucky Wildcats Played the Philadelphia 76ers? What about Michigan State, Duke or Kansas? 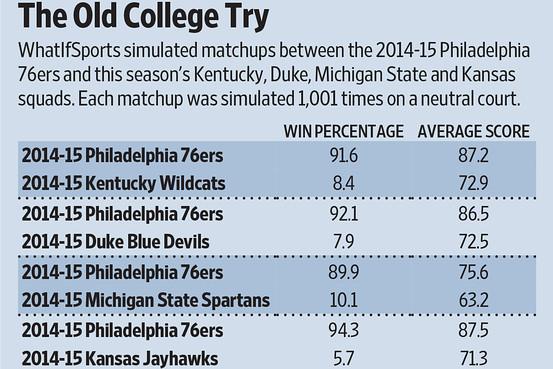 INDIANAPOLIS — What if the Kentucky Wildcats and their nine McDonald’s All-Americans played the 0-10 Philadelphia 76ers? Would Kentucky win? Some people have mocked this notion, including Wildcats head coach John Calipari. After Kentucky recently defeated Georgetown College, 121-52, Georgetown coach Chris Briggs said:  “I just told the guys in the locker room, they could have beaten some NBA teams tonight. No doubt in my mind.” That prompted this Twitter response from Calipari: “I hear Coach Briggs got excited after the game last night. Let me be clear: If we played ANY NBA team, we would get buried. ANY.” But what about the Sixers, John? This team isn’t representative of your average NBA team. Take a look at their roster. “So silly,” an NBA scout told SNY.tv. “Sixers would win every time.” The Wall Street Journal ran the above computer simulation in which the Sixers played Kentucky, Duke, Michigan State and Kansas — the four teams in tonight’s Champions Classic — 1,001 times and came up with these results. The Spartans actually had the best results, winning 10.1 percent of the matchups, followed by Kentucky (8.4), Duke (7.9) and Kansas (5.7). Wait till Michael Carter-Williams gets a load of these results.