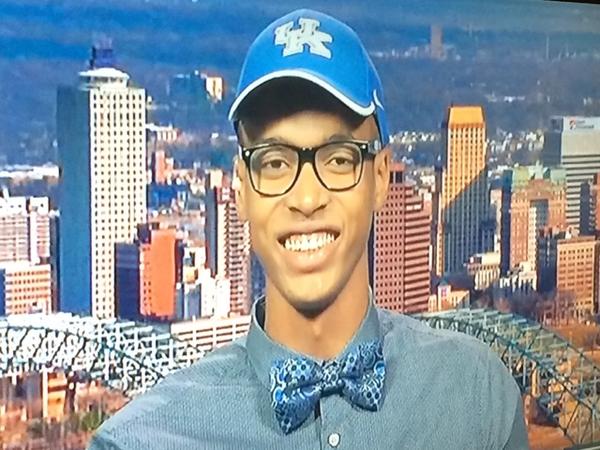 The somewhat mysterious recruitment of Skal Labissiere has come to an end. The 6-foot-10, 210-pound big man from Haiti by way of Memphis committed to Kentucky on Thursday on ESPNU, choosing the Wildcats over hometown Memphis as well as North Carolina, Georgetown, Baylor and Tennessee. “Next year, I’ll be a Wildcat at the University of Kentucky,” Labissiere, the No. 11 player in the ESPN100, said on ESPNU. “Since my freshman year, I always wanted to go there. I watched [Coach John Calipari’s] teams with Anthony Davis and Nerlens Noel. That’s one of the reasons why I worked so hard in my academics and on the court, because I always wanted to go there.” Labissiere, whose guardian Gerald Hamilton has made controversial headlines recently, became Kentucky’s second commit in the Class of 2015, following 6-6 Chicago St. Rita guard Charles Matthews, who is expected to sign on Friday. Minutes after Labissiere committed, 6-3 Roselle (N.J.) Catholic point guard Isaiah Briscoe put on a Kentucky hat and chose Big Blue Nation over St. John’s and UConn. Kentucky figures to have a mass exodus of frontcourt players, with Karl-Anthony Towns, Willie Cauley-Stein and Dakari Johnson all potentially headed to the NBA. That should open up playing time for Labissiere as a freshman, but the big man needs to add strength to compete at that level. “He needs to get a lot stronger,” longtime New York recruiting analyst Tom Konchalski told SNY.tv. “That’s one of the reasons why he shies away from playing with his back to the basket. He’s not a very accomplished back-to-basket player. He’s a guy who’s much more comfortable facing up, either from the high post or even shooting 3’s from the top of the key. He has a very good touch. He runs very well. He’s quick off his feet, he has very soft hands and he’s a very skilled player. “But the main thing is right now what he has to do, is he’s got to get a lot stronger. I mean, Kentucky has managers who are stronger than he is. He’s mobile, he’s agile but he’s not yet hostile. He’s gotta get a lot stronger and develop a back-to-the-basket game because he’s a 7-footer.” Former Virginia, Providence and Xavier coach Pete Gillen coached Labissiere at the Reebok Camp and came away saying he likes the young man’s game but that he needs to be more assertive. “He got better as the week went on,” Gillen told SNY.tv in July. “He’s such a nice young man. He’s a beautiful kid, you want your son to be more like him, but he’s gotta be more aggressive. But as the week went on he got more aggressive….He was like a volcano that grew. “He’s a finesse post guy. You can say four/five. He’s certainly comfortable facing the basket but I think he’s a versatile post man. He can play the four or five.” Labissiere’s story has been well documented. Born in Haiti, he was pinned under a pile of rubble after the devastating earthquake that hit that country on Jan. 12, 2010 and killed more than 200,000 people. He was ultimately rescued by his father, and later came to the United States, where he enrolled at Evangelical Christian in Memphis to play for legendary Tennessee high school coach Terry Tippett. “He worked with me on the fundamentals of the game,” Labissiere said. Labissiere, 18, considers Memphis home but ended up spurning the hometown Tigers for Kentucky. “It’s a great school,” he said of Memphis in July. “It’s my second home, Memphis is my second home.. Moving from Haiti and the city really embraced me so they really want me to play there.” Photo: Jason Smith/ Commercial Appeal