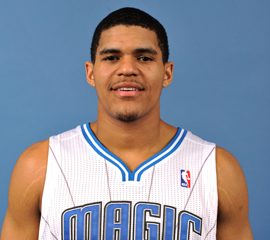 By JOSH NEWMAN Tobias Harris has a very good reason to opt for restricted free agency next summer instead of signing a long-term extension with the Orlando Magic before the Oct. 31 deadline. Confirming a Chris Broussard tweet from earlier Friday, sources told SNY.tv that Harris gets an upgrade in his Nike contract if he plays in either New York, Chicago or Los Angeles. Harris, the 19th overall pick in the 2011 NBA Draft and a former star at both Half Hollow Hills (N.Y.) West and Long Island Lutheran High Schools, is entering the final year of his 4-year, $6.8 million rookie deal after spending one season at the University of Tennessee. Under NBA rules, teams are allowed to negotiate with their 2011 draftees from July 1 through Oct. 31 to agree to a contract extension that kicks in next year. If an extension is reached, said player would still earn his rookie-scale salary in 2014-15, then see the big jump in pay beginning next season. If the Magic and Harris do not reach a deal before Oct. 31, he will hit restrictive free agency on July 1, 2015. Attention turned to Harris once Magic teammate Nikola Vucevic, the 16th overall pick in 2011, agreed to a 4-year, $53 million extension with the club on Tuesday. “I just play basketball,” Harris told the Orlando Sentinel on Wednesday. “I let my agent (Henry Thomas) handle that. I’m all about my team and us getting better as a unit, as a team and us winning more games this year. So that’s where my mindset is. I told my agent, ‘If something happens, you can call me. But if not, don’t call me.’ I’ll be ready to go every night.” In 61 games last season, Harris averaged 14.6 points and 7.1 rebounds per game. He is coming off a strong preseason in which he averaged 16.2 points, 7.2 rebounds and 2.0 assists. Kyrie Irving (five years, $90 million), Markieff Morris (four years, $32 million), Marcus Morris, (four years, $20 million) and Kenneth Faried (four years, $52 million) are notable 2011 draftees who have agreed to deals, while Tristan Thompson, Kemba Walker, Klay Thompson and Kawhi Leonard are still on the board. Follow Josh Newman on Twitter

With Steve Nash Gone (Maybe for Good), Who's Next for Canada?