With Steve Nash Gone (Maybe for Good), Who's Next for Canada? | Zagsblog
Follow @adamzagoria

With Steve Nash Gone (Maybe for Good), Who’s Next for Canada? 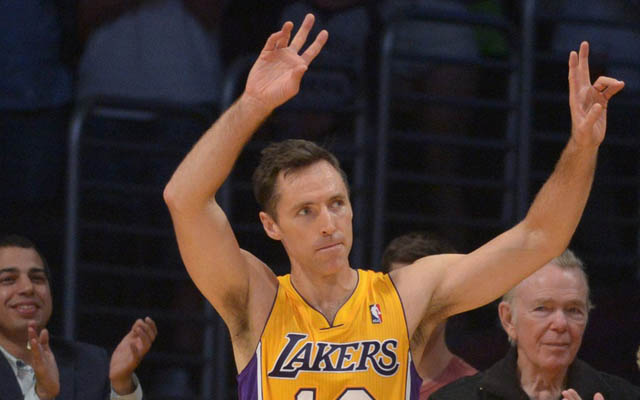 Jay Triano, the head coach of the Canadian National basketball team, spoke with Steve Nash on Thursday and said the Hall-of-Fame-bound point guard is “frustrated” that he will have to miss the 2014-15 season because of recurring nerve damage in his back. “He was frustrated more than anything that he can be the best player on the floor for a couple of days and then for a week or two weeks, he has try to to get healthy,” Triano told SNY.tv by phone Friday. “He said that part of it was frustrating. “Even last year it took him two or three days to get ready for a game and in the NBA that’s tough to do because there aren’t two or three days between games.” Triano said he didn’t discuss Nash’s future plans with the 40-year-old Canadian, and it remains unclear if Nash has played his last NBA game. “I really don’t know,” Triano said. “I would never say to him he can’t do something because that’s when he does his best. I haven’t talked to him about whether he’s going to try to come back or what’s going to happen.” With Nash possibly done for good, a new wave of Canadians is now leading the way in the NBA, including Tristan Thompson of Cleveland, Cory Joseph of NBA champion San Antonio, Kelly Olynyk of Boston and back-to-back No. 1 picks Anthony Bennett and Andrew Wiggins, now both with Minnesota. All told, there are 13 Canadians on opening rosters, including Nash, who is listed as inactive. “I think they’re sad for him as a freind more than anything,” Triano said of how the younger Canadians feel about Nash. “The young kids, they all watched him play growing up. They all saw what he did when he was in his prime. I think they all feel for him as a person more than anything.” Nash is also the GM of the Canadian National Team and is familiar with many of the young guys. “I think that these guys all looked up to him,” Triano said. “He was in the NBA when they were impressionable young basketball players. He has that place in their lives.” Asked who the top Canadian gun is now that Nash may be gone, Triano listed Thompson, Joseph and Olynyk. But Wiggins, the No. 1 pick in this year’s draft out of Kansas, may have the biggest upside of them all. He was briefly a teammate of LeBron James in Cleveland before he was dealt to Minnesota in the Kevin Love deal. “I think there’s two things that could happen,” Triano said. “With LeBron he could learn from one of the best, but going to Minnesota he probably has an opportunity to play a little bit more.”   Canadian players on 2014-2015 NBA rosters are: Player (Hometown) – NBA Team Joel Anthony (Montreal, QC) – Detroit Pistons Anthony Bennett (Brampton, ON) – Minnesota Timberwolves Samuel Dalembert (Montreal, QC) – New York Knicks Tyler Ennis (Brampton, ON) – Phoenix Suns Cory Joseph (Toronto, ON) – San Antonio Spurs Steve Nash (Victoria, BC) – Los Angeles Lakers (INACTIVE) Andrew Nicholson (Mississauga, ON) – Orlando Magic Kelly Olynyk (Toronto, ON) – Boston Celtics Dwight Powell (Toronto, ON) – Boston Celtics Robert Sacre (Vancouver, BC) – Los Angeles Lakers Nik Stauskas (Mississauga, ON) – Sacramento Kings Tristan Thompson (Toronto, ON) – Cleveland Cavaliers Andrew Wiggins (Toronto, ON) – Minnesota Timberwolves