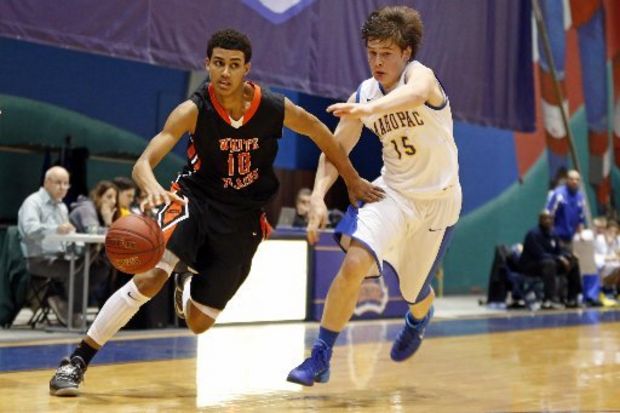 Jordan Tucker, a 6-foot-7 2017 wing from White Plains (N.Y.) Archbishop Stepinac, picked up a Syracuse offer over the weekend after Orange coach Jim Boeheim watched him play in Albany. He confirmed he will visit Syracuse Oct. 17. ”It kind of made me nervous but excited for myself at the same time,” Tucker told Scout.com. “Because when you think of a coach like Jim Boeheim coaching you and you see him work with NBA players and the interest he has in those players. Then in the back of his mind he’s thinking about me and how I’m doing and how I play.” Tucker also holds offers from  Villanova, Dayton, Xavier, Providence, Oklahoma, Fordham and Manhattan. “The interesting thing about him is he’s a hard worker and he hasn’t come close to reaching his potential,” New York Lightning coach Shandue McNeill told Syracuse.com. “He’s got a high IQ and his advantage is his versatility at 6-7. And I don’t think he’s done growing.” Photo: AP