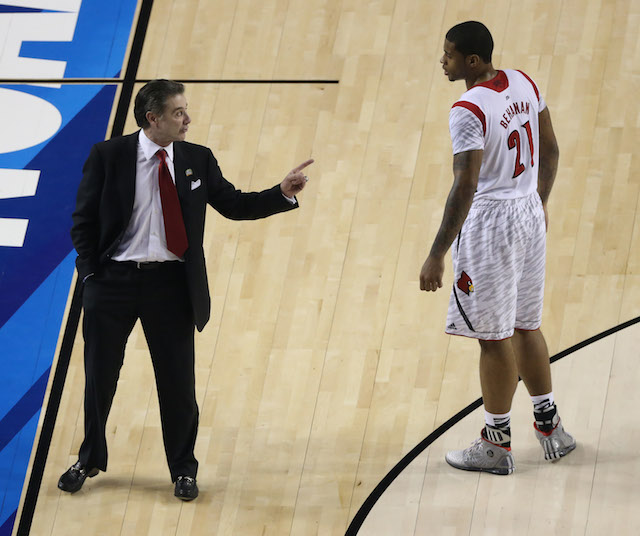 Former Louisville forward Chane Behanan has hired an agent and will declare this week for the NBA Draft, a source close to the situation told SNY.tv. “Yeah, sometime this week,” the source said. “He signed, he’s got an agent already.” Behanan took to Twitter to respond, saying, “Never Reported anything so don’t listen. If I haven’t said it then it’s not true.” One veteran NBA scout thinks going to the NBA is a bad move, calling it a “mistake.” “Off the court issues will really affect his draft stock,” the scout told SNY.tv. “He goes undrafted. He is a small 4 with no NBA-type  3 skills.” Colorado State coach Larry Eustachy issued the following statement, according to the Courier-Journal: “We’ve been in contact with Chane, and are aware that he is looking at all options to continue his playing career. We want what is best for Chane, and will support him in whatever decision he makes. We will know more in the coming days.” The Journal also reported that Behanan has “an April 29 court date set in Louisville for marijuana possession.” The 6-foot-6 Behanan was dismissed from Louisville in December for a violation of team rules. He averaged 7.6 points and 6.3 rebounds last season with the Cardinals. He had been a huge part of Louisville’s NCAA championship run in 2012-13, averaging 12.5 points and 10.5 rebounds in the national semifinals and final. After spending some time with John Lucas at his facility in Houston for a reported drug issue, Behanan transferred to Colorado State. Now it looks like he will never suit up there. Follow Adam Zagoria on Twitter And like ZAGS on Facebook