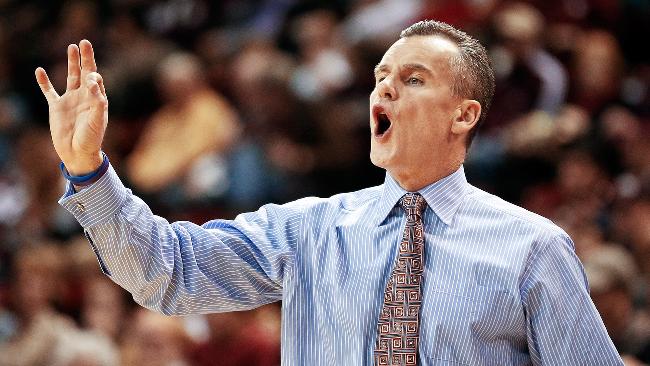 Louisville coach Rick Pitino thinks Billy Donovan would be a “terrific” NBA coach, but says he’ll likely get “cold feet” and won’t make the jump. The Florida coach, who in 2007 took the Orlando Magic job only to have a change of heart that brought him back to Florida, is now being linked to the Minnesota Timberwolves position vacated by Rick Adelman’s retirement. “Billy would be terrific because he’s a lot like Brad Stevens in his personality,” Pitino, who coached Donovan at Providence, said Wednesday on ESPN’s Mike & Mike. Pitino added: “A Brad Stevens, he can adjust [to the NBA]. He has the personality and Billy Donovan has the personality.” When the Magic opportunity came along, Pitino said Donovan, now 49, told him his parents, his wife Christine and those around Donovan wanted him to take the job. “Billy has always in the back of his mind wanted to try it.” Pitino said. “He loves strategy, he loves offensive plays, he loves staying up all night and thinking of different ways to innovate and he also has the personality to deal with professional athletes because he’s a very humble man. He doesn’t care that he has to be in control of his environment. And he would I think do very well if he chooses to take that path.” In the end, though, Pitino said he thinks Donovan will get “cold feet” and won’t make the jump. “I think Billy always gets cold feet at the end because with him it’s always been about team and family,” Pitino said. “More than any person I’ve met in my life and encountered in my 40 years of coaching, Billy Donovan has his priorities more in line than any person I’ve ever met.” Amid these reports, Donovan is out on the recruiting trail. For example, he will have an in-home visit Wednesday night with 2014 uncommitted forward Jackson Davis. Pitino also said the transition from college to the NBA is “almost a foreign sport,” pointing out that college players like to practice to get better for the NBA, while NBA players generally don’t like to practice. As for Izzo, 59, who has also been linked to the Wolves job, Pitino said that would be more of an adjustment because of his age and style “Tom is a different type of a basketball coach,” Pitino said. “Not that he couldn’t be successful, he’d have to adjust tremendously. And if he’s willing to do that, he’d be an excellent pro coach but he’d have to really, really adjust to the professional athlete.” Photo: AP Follow Adam Zagoria on Twitter And like ZAGS on Facebook