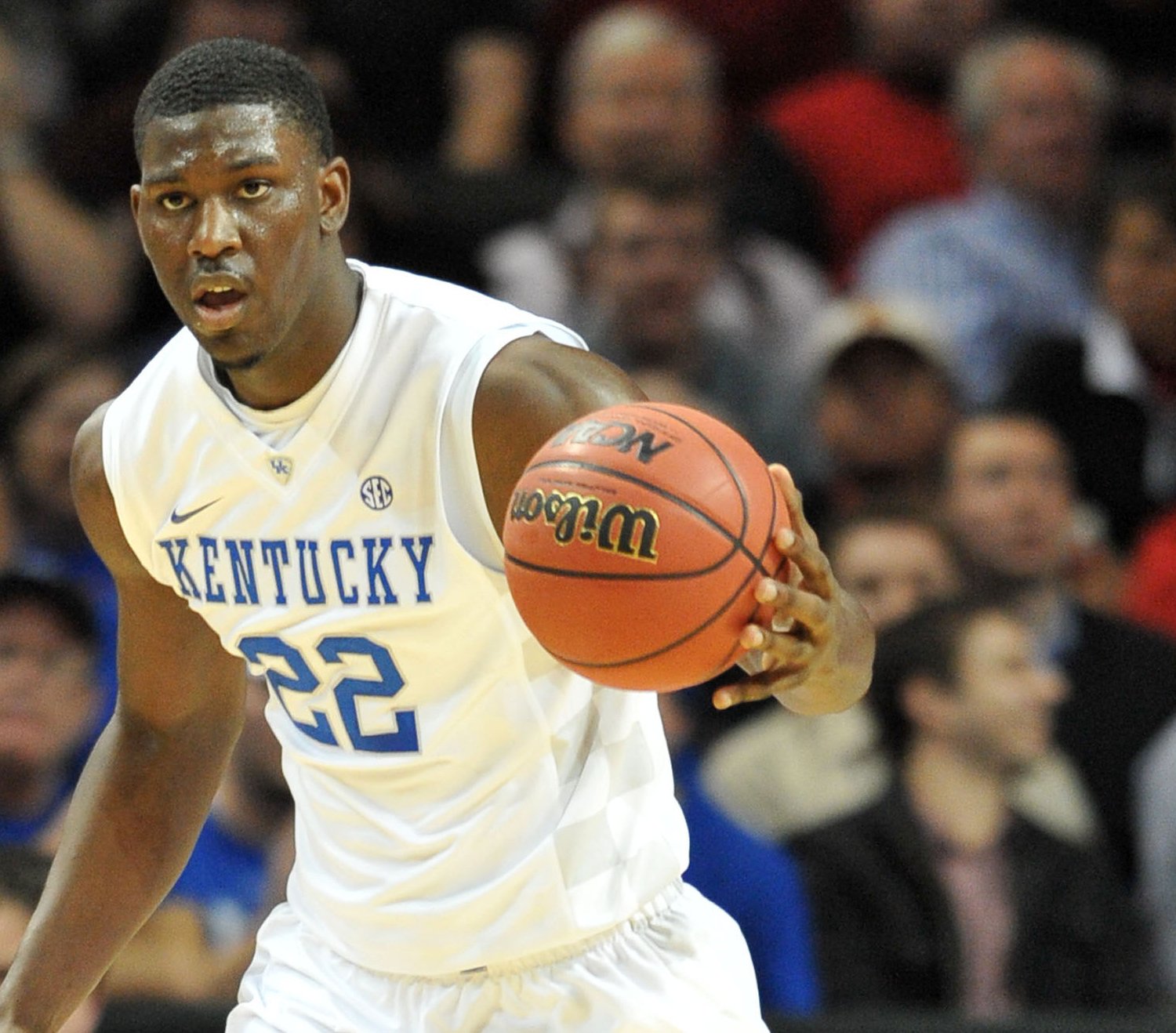 Kentucky freshman center Dakari Johnson and sophomore forward Alex Poythress both made the wise decision to return to Kentucky for next season, adding to what will surely be a loaded frontcourt and a very deep team. The 7-foot Johnson is projected as the No. 18 pick in the 2015 NBA Draft by DraftExpress.com, while the 6-7 Poythress is projected as the No. 42 pick. Both can help their stock with a strong season next year. “After looking at the information provided to me by Coach Cal and the NBA committee, my family and I made the decision for me to return to UK for my sophomore year,” Johnson said. “Returning to school allows me to build on my leadership skills, improve my individual basketball strength and conditioning skills, and have another opportunity to accomplish one of my individual goals: winning an NCAA national championship in college.” The 7-foot center started 18 of Kentucky’s last 20 games, averaging 5.8 points and 4.6 rebounds per game during that stretch. “I’m happy to have Dakari back with us for next season,” head coach John Calipari said. “Despite being the youngest player on the team this season, he continued to improve every day on the court and it showed. We look forward to seeing his improvement over the summer and throughout next year.” Poythress averaged 5.9 points and 4.5 rebounds in helping lead the Wildcats to the NCAA title game. He shot better than 68 percent from the field in the NCAA Tournament, including an eight-point, seven-rebound performance in the Final Four against Wisconsin. “Playing in the NBA has always been a dream of mine, but I want to make sure that I’m NBA-ready before I make that jump,” Poythress said. “By coming back, I’ll be so much closer to earning my degree in business and it will give me another year to prepare my game and my body for the next level.” “I’m excited for Alex and the decision he’s arrived at,” Calipari said. “I’m proud of the work he committed to this past season, on and off the floor, and think he’s ready to take that next step and lead this team next season.” Fellow sophomore Willie Cauley-Stein and freshman Marcus Lee announced their intentions to return for the 2014-15 season last week. Those two, along with Johnson and Poythress, will be joined by incoming freshmen bigs Trey Lyles and Karl-Anthony Towns. Forwards Julius Randle and James Young are headed to the NBA Draft, while freshmen guards Andrew and Aaron Harrison have yet to announce their plans. Kentucky now has the No. 4 (Towns), 8 (Cauley-Stein), 18 (Johnson), 26 (Aaron Harrison), 31 (Andrew Harrison) and 42 (Poythress) picks in the 2015 Draft, according to DraftExpress. And that doesn’t include Lyles. Photo: KentuckySports.com Follow Adam Zagoria on Twitter And like ZAGS on Facebook

Still No Official Word on the Harrison Twins