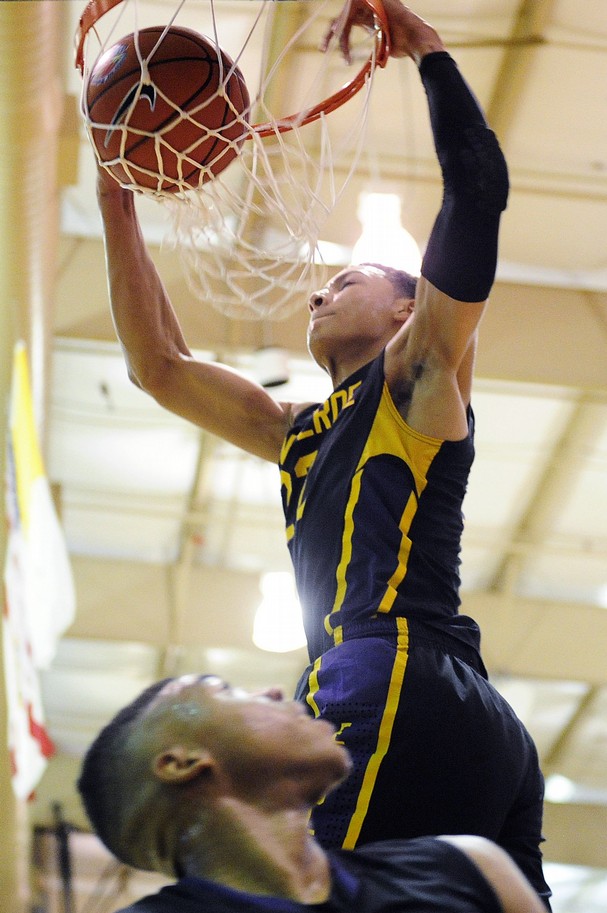 By JOHN PAVIA Special to ZAGSBLOG NEW YORK — To cap the DICK’S Sporting Goods High School National Tournament, Montverde Academy (FL) held off Oak Hill Academy (VA), 71-62, to repeat as champions in what was their third straight finals appearance. Playing in Madison Square Garden, the mecca of basketball, can be intimidating and cause jitters for some players, but you’d never know it by watching Ben Simmons play on Saturday. The Australian, who won the MVP of the tournament and is heading to LSU after next year, was an absolute monster on the court as he finished with 24 points, 12 rebounds and five assists. Flanking Simmons’ huge effort was Ohio State commit D’Angelo Russell, who finished with 16 points and 11 rebounds and Virginia Tech commit Justin Bibbs, who tallied 17 points. For Oak Hill Academy, they were led by Terrence Phillips with 15 points and N.C. State-bound Cody and Caleb Martin with 14 and 13 points, respectively. Cody also had 10 rebounds. After Friday’s win over Huntington Prep, in which Simmons only took seven shots, coach Kevin Boyle stated that his team needed to get Simmons more touches and shots. They followed through with that game-plan and Simmons was an efficient 11-of-20 from the field in their win. His quickness and athleticism was a major problem for Rokas Gustys on Oak Hill who guarded Simmons for most of the game.  Simmons had several rim-rattling dunks in transition and some difficult finishes through contact to show why he is currently ranked third in ESPN’s Super 60 Class of 2015. “I think he [Simmons] is improving constantly,” Boyle said. “He’s a very bright player, he’s got good instincts and to me, the scary thing is I think he’ll be a lot better next year. He’s really improving his shot. You haven’t seen it so much in games yet, but he’s working on it. He’s got good backspin and I think next year he’ll be taking more jump shots, developing his pull-up jump shot and then his second move when he beats somebody and someone helps. He’s got to get that second move and get by the next guy and when that happens, it’s going to be scary. The sky could be the limit for him. I think he’s starting to get hungrier, understanding how hard these guys work. He’s talking to guys like Kasey Hill and Dakari [Johnson]. He’s getting close to being there.” With Simmons refining his game and being “very close to that next level,” his upside is tremendously high and it’s not too early to start thinking about where Simmons could be only a few short years from now. “He’s got an excellent chance though if he keeps working to be in the league” Boyle said.  “But he needs a lot of work to be a star in the league. Even though he’s very good, he’s ahead of the curve now, but if he doesn’t improve the perimeter game, if he doesn’t improve the next move when somebody helps, then he’s going to be a contributor and not a Carmelo [Anthony] or one of those guys. I think he’s going to get there, but that’s really up to him. He’s got it, but it’s up to him if he wants it that bad to be a star level player in the NBA.” After coming to Montverde Academy late last year, Simmons briefly discussed the difference in not being able to play much during last year’s run to a championship at this event and being instrumental in their victory this year. “Definitely coming in late was a bit different for me because I had to find where I was at and I wasn’t sure if I was going to play much,” Simmons said. “Then I got into the [title] game and just tried to do what I could for the team. But definitely this year is a lot different knowing I’m one of the older guys.” Simmons also talked with SNY.tv about what the future might look like at LSU. “They [LSU] already have a lot of great freshmen,” he said. “They’ve got Jarell [Martin], Jordan Mickey and Tim Quarterman, but I’m definitely looking forward to getting there. I’m just trying to help them win as many games as possible, if that’s going to the NCAA Tournament, but I definitely think LSU has a bright future.” Simmons, who moved from Melbourne, Australia, spoke about the wave of Australian prospects like Dante Exum, whom Simmons grew up with, coming over to the States to find basketball success like Andrew Bogut has in the NBA. Exum is projected as a lottery pick in June. “It’s kind of different because you’re a part of a certain group that’s evolving, that’s coming over to the States now and showing that Australians are up-and-coming in the basketball world,” he said. “I just think it’s a great opportunity for us to come over here and show the American people what we can do.” Photo: Naples News Follow John Pavia on Twitter

Kentucky's Dakari Johnson Predicted an NCAA Championship a Year Ago

After Calhoun Told Daniels To be a 'Son of a Bitch,' He Leads UConn into NCAA Championship Game, Boosts NBA Draft Stock