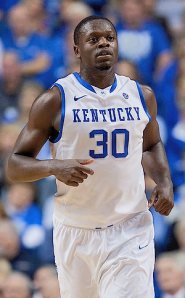 ARLINGTON, Texas — The Final Four is in Julius Randle’s backyard and to hear him tell it, the Dallas native been planning on playing in it since the eighth grade. “It’s kind of weird. It’s just what I asked for,” Randle said, according to the AP. “I was in study hall and I didn’t have anything to do, and I found out it was here, the national championship, Dallas. It’s just where I wanted to be and it’s always been my goal.” Carolyn Kyles, Randle’s mother, said she recalls her son telling her his plan back in 2008 when the site was announced. “He told me he wanted to come back here,” Kyles told Kyle Tucker of the Courier-Journal. “This has been his dream. He tweeted it two years ago, that he wanted to come back here in 2014. And his dream has come true. It’s so unreal, everything they’ve been through, that they’re actually here.” Randle — whose NBA Draft stock has risen with Kentucky’s run to the Final Four — isn’t the only Kentucky player from Texas who will be making a homecoming when Kentucky meets Wisconsin Saturday night. Twins Andrew and Aaron Harrison, who have enjoyed a strong second act during the NCAA Tournament, are from Richmond, Texas. “It should be fun going back,” Andrew said, according to the AP. Aaron Harrison is averaging 16 points in the NCAA Tournament, including the game-winning 3-pointer against Michigan in the Elite 8, and Andrew is averaging 12.3. Randle, who won three state titles at Prestonwood Christian Academy, is averaging a double-double of 15.8 points and 12.0 rebounds. “I’m just excited to be playing,” Randle said here Thursday. “It doesn’t matter if it was in Dallas or wherever it was. Just to have the opportunity and blessing to play in the Final Four is all that really matters to me. “It’s kind of been emotional for my family, all that the team’s been through this year. They’re just really proud of where we came from. “But at the end of the day we’re just excited to get out there and compete and have another opportunity to play the game.” Photo: AP