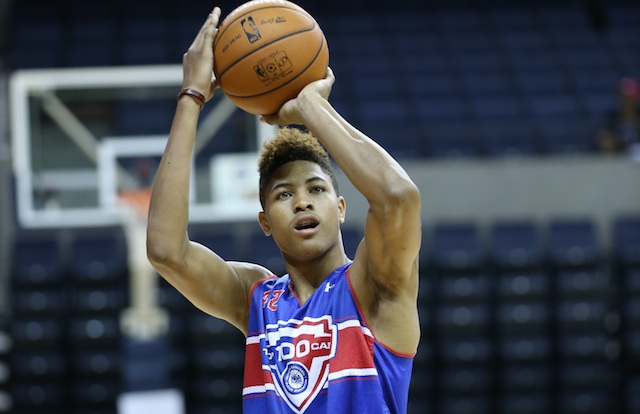 By JOHN PAVIA Special to ZAGSBLOG NEW YORK — For some high school players, playing two games in less than 24 hours can be exhausting and limit one’s ability to perform in the second game, but you’d never know it from watching Kelly Oubre play Thursday in his Findlay Prep (NV) team’s 67-59 win over Rainier Beach (WA). Oubre, the 6-foot-7 wing who is heading to Kansas next season, finished with 17 points and 14 rebounds after playing 18 minutes in the McDonald’s All-American game in Chicago Wednesday night. He is ranked 11th in the Class of 2014 on ESPN and will essentially be replacing Andrew Wiggins, who declared for the NBA Draft a couple days ago. Oubre talked with SNY.tv about the notion that replacing Wiggins, the potential No. 1 pick, might be a burden for him entering next year. “Not at all actually,” he said. “I mean, Andrew was highly touted coming out of high school. He had way more hype than I did. I’m pretty much just coming in as a guy who’s just about to give it my all and just show the world that you all pretty much slept on me coming in and I’m glad I don’t have that much hype. I like being under the radar because I can come in and wake everybody up. You know, being Andrew’s successor as everyone’s saying, I don’t pay it any mind, pretty much, because Andrew and I are two different players. Andrew was great and I aspire to be great also.” Having Wiggins as a mentor and advisor during the year has given Oubre a blueprint to follow when he heads to Kansas. “He [Wiggins] keeps it level because he’s a real focused guy so pretty much he’s just helped me stay focused because that’s the only way you’re going to get through this,” Oubre said. “It’s a lot of work, it’s not easy.” While it might not be easy, Oubre will join a Kansas squad with Cliff Alexander, who is the third-rated player on ESPN in the Class of 2014. These two are the only committed players for coach Bill Self so far, but that hasn’t stopped the pair from thinking big. “We always talk about that [next year at Kansas],” Oubre said. “We’re just ready and anticipating what’s coming ahead of us. We know college isn’t going to be a cakewalk. We’re just ready to work and show the world that just because there’s only two of us going to Kansas, it’s going to seem like eight.” Freshman guard Wayne Selden will return for his sophomore season with the Jayhawks and there is still a chance potential No. 1 overall pick Joel Embiid could return as well. You could possibly add in the versatile Perry Ellis, should he stay, and Naadir Tharpe to that group, and you would have a scary combination of four starters from that group of players. This possibility has not been lost on Oubre. “Every other class knows in the back of their heads that they might have a lot of freshmen coming in, but Kansas doesn’t,” he said. “But if Joel stays, Wayne is staying with a heavy threat of Naadir at the one, it’s going to be scary for them.” Regardless of Kansas’ early exit in the NCAA Tournament, Oubre is already telling his future coach, Self, not to worry. “I talked to him [Wednesday],” Oubre said. “He pretty much just told me to show out in the [McDonald’s All-American] game and do what I do, just play hard. I told him, “You know, coach, don’t worry about the loss [to Stanford] and next year we’re going to work harder to get past the point that we were at this year.'” One of the incredible feats that must be recognized about Oubre’s performance against Rainier Beach is that he played Thursday’s game after playing the McDonald’s All-American game in Chicago Wednesday night at 11:30 p.m. EST and then flying to New York the following morning at 6 a.m. for this tournament. Findlay Prep coach Jerome Williams raved about Oubre’s ability to play this well on short rest and also got in a couple jokes about it as well. “NBA players don’t do that,” WIlliams said. “There’s no such thing as a back-to-back where you don’t even have a full 24 hours of rest and recovery so I just tip my hat to them. To me, they didn’t make any mistakes.” Rainier Beach coach Mike Bethea told SNY.tv after the game that “Oubre is as good as everybody thought he was. He’s a good athlete and big-time player. He hit big shots when his team needed them.” Follow John Pavin on Twitter