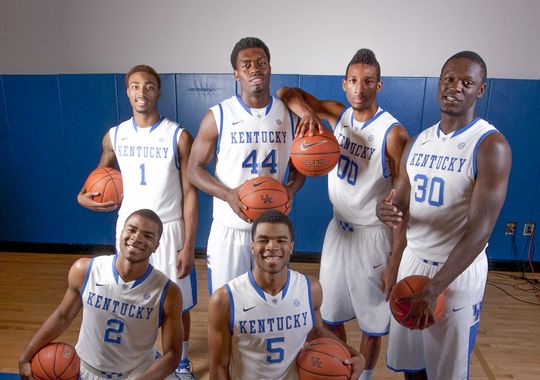 NEW YORK — Here we are entering the Final Four and Kentucky remains the last great hope for the Year of the Frosh. Sound like a familiar story? With Arizona’s loss to Wisconsin Saturday night — their fourth straight Elite 8 loss —  five of the top eight picks in the DraftExpress.com Mock Draft are out of the NCAA Tournament. And they’re all freshmen. That would be No. 1 Andrew Wiggins, No. 2 Joel Embiid, No. 3 Jabari Parker, No. 7 Noah Vonleh and No. 8 Aaron Gordon. Tyler Ennis, another frosh projected at No. 14, is also done. Who does that leave? Just the Kentucky crew of Julius Randle, ranked No. 4 on Draft Express and No. 25 James Young — as well as projected 2015 picks the Harrison twins and big man Dakari Johnson — a group that is headed to the Final Four after being left for dead down the stretch of the regular season. “And the best thing about it is we all go through the same things,” Aaron Harrison said Saturday, one day after hitting another huge 3-pointer to help Kentucky knock off Michigan, 75-72, in Indianapolis. “We all get criticized, and we all get blamed and things like that, but… we came together. And I think that’s the best thing there.” Yes, with Kentucky’s win over Michigan in the Elite 8 Sunday, we appear to have a new “Fab 5.” Michigan started five frosh en route to back-to-back NCAA Tournament final appearances in the early 90s, and now here comes Kentucky starting all five frosh in 2014. The year they supposedly had the best recruiting class ever, only to fall out of the Top 25 entering the tournament. “Well, we don’t pay much attention to that,” Brooklyn’s Johnson said. “We just play each game and take one game at a time and just focus on winning ball games.” “Yeah, really can’t pay attention to stuff like that,” Andrew Harrison said. “You just have to go out there, play every game like it’s your last.” Aaron and Andrew Harrison were maligned for much of the season for not living up to the hype created by the media and NBA personnel. They have since been relegated to the bottom of the 2015 Mock Draft. But now they have a chance to boost their NBA Draft stocks in the coming days. ‘It was the media that made all the hype with the freshmen,” Michigan State coach Tom Izzo said here in New York Saturday, one day before falling to UConn in the Elite 8, 60-54. If Kentucky can win two more games, would that be a vindication of coach John Calipari’s one-and-done philosophy? It sure would make for an interesting discussion, as Calipari would then have two of the last three NCAA titles, relying primarily on freshmen. “We grew up,” Calipari said. “We have 18-, 19-year-olds that were counted out and ridiculed and crushed and can’t play, not any good, bad guys. “I mean, you’ve got a bunch of good guys up here that have stuck together through all the barrage, never let it affect them together. They kept believing and they believed in the staff, and they know — because I told them the whole time: I’m never going to give up on any individual or a team. I won’t. We’ll go to whatever we have to try to do to do this.” Kentucky is not a fait accompli to cut the nets down in North Texas. But none of the other three teams — Florida, Wisconsin and UConn — rely on freshmen. “As I said all along, Kentucky has done a good job…but experience is good in coaching and experience is good with players,” Izzo, who was trying to win the Big Ten’s first title since 2000, said as he was flanked by non-freshmen in New York. “And any time you have some experience, I always tell these guys, that you can win a lot of games one way, but to win championships and advance in tournaments, usually you need some key things and toughness is one. And I think the experience they bring and the hunger to get there, if they haven’t been there yet, is one. “I think it’s a shame that we put so much pressure on these freshmen and sophomores instead of letting them just enjoy their time. Our whole society is trying to speed it up. Trying to put 16-year-olds into Harvard and I don’t understand it. I like being a snot-nosed kid. That was the most fun I ever had. And we’re trying to take it away. So I struggle with that a little bit.” The struggle of the freshmen versus the field is alive and well thanks to Kentucky. With Duke, Kansas, Arizona and Syracuse all gone, it is Calipari’s crew left as the only ones standing in the Year of the Frosh. And doesn’t that seem fitting? Photo: Gannett