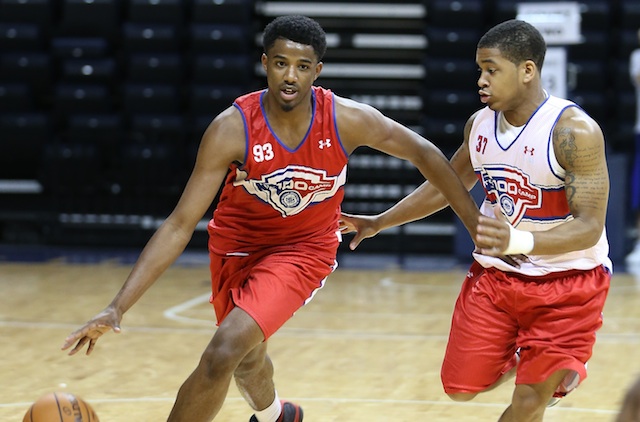 JaQuan Lyle is finally off the board and headed to Oregon. The 6-foot-5 Huntington (W.V.) Prep guard announced he has chosen the Ducks over Memphis. “Next year, I will be attending the University of Oregon,” Lyle said at his press conference Wednesday evening. Lyle is the fifth player to chose the Ducks, joining point guard Casey Benson, small forward Dwayne Benjamin, power forward Ray Kasongo and big man Michael Chandler. The onetime Louisville commit originally listed Kansas and Oklahoma State, too, but SNY.tv reported separately that both schools were out. Lyle visited Oregon in February and previously told SNY.tv he enjoyed it. “I liked everything about it,” Lyle said. “I got to meet coach Dana [Altman] in person and meet the coaching staff. I got to see a great game, got to see all the facilities, so I like it. I like it a lot. It was a great visit.” Lyle has a strong relationship with assistant coach Tony Stubblefield, who is recruiting him. “Oh, yeah, me and coach Stubbs, we have a great relationship,” he said. “I think me and him built a great relationship throughout this process and it just keeps growing and he’s a great guy.” Photo: Kelly Kline/Under Armour

In a Potential One-and-Done Season, Ennis Says 'A Lot of People Wrote Syracuse Off'

DeAndre' Bembry, And His Hair, A Force to be Reckoned With