NEW YORK — St. John’s basketball team is officially on the road to redemption after a stellar performance in a 74-59 win over Marquette at Madison Square Garden.

Following a dreadful 0-5 start in Big East play, St. John’s (13-9, 3-6) has rebounded nicely to win four of their last five with their only loss coming to a talented Creighton team on a game-winning 3-pointer from their star player, Doug McDermott.

D’Angelo Harrison led the way for the Red Storm with 27 points and six rebounds while teammates JaKarr Sampson and Chris Obekpa made their presences known as they capped a well-rounded performance from the now-streaking St. John’s team. Sampson finished with 10 points and seven rebounds while Obekpa’s seven blocks started several instances of transition offense.

NEW YORK — If the Canadian national team, which was set to feature Andrew Wiggins, Anthony Bennett, Tristan Thompson and Tyler Ennis, is going to become a player on the international stage, it is going to have to wait until at least the 2016 Rio Olympics.

This summer’s FIBA World Cup (formerly FIBA World Championships) will be contested from Aug. 30-Sept. 14 in Spain, but the Olympic qualifier will not include the Canadians, who were not one of the four wildcard teams selected for the 24-team event early Saturday morning. Those four spots went to Brazil, Greece, Turkey and, surprisingly, Finland.

To qualify for Rio in 2016, Canada will need to go through the 2015 FIBA Americas Championship. The host country and participating teams have yet to be finalized.

Before the announcement was made, Thompson, now with the Cleveland Cavaliers, told SNY.tv that Canada had a bright future on the international stage.

“It’s promising,” he said. “On paper, we got talent and the key is for us to grow together as a team because in the international game you got to kind of have that chemistry and build that camaraderie together, so I think for years to come we’re gonna be pretty good.” 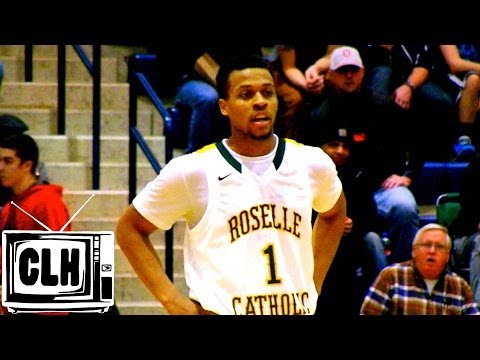 NEWARK, N.J. —  In the highly anticipated match-up of the Newark Invitational, a crowd including Rutgers head coach Eddie Jordan was treated to a thrilling St. Benedict’s Prep 64-58 win over Roselle Catholic.

Jordan was on hand to see  Isaiah Briscoe take on a very talented Gray Bees squad with several Division 1 recruits.

The 6-foot-3 2015 guard is considering several schools, including Syracuse, Arizona, Louisville, Providence, Gonzaga, Seton Hall and St. John’s, but some believe Rutgers has the inside track at this point. Briscoe has attended several games at Rutgers this year and last year, and could be the face of the program after they join the Big Ten next year.

NEW ROCHELLE, N.Y. — Playing archrival Manhattan for the first time since defeating them for the MAAC championship last March, Iona fed off a sellout home crowd to take the first meeting of the season between the two teams considered conference favorites, with five Gaels in double figures en route to an 85-73 win at the Hynes Center.

“What a crowd! What an environment for a college game,” Iona coach Tim Cluess exclaimed after the Gaels won their second straight against Manhattan, and fourth in a row this season. “It’s great for all players, and that’s what Iona-Manhattan is all about.”

Iona was led by David Laury’s 21 points and eight rebounds off the bench, as well as a career-high 19 from Rutgers transfer Mike Poole, but the mood and overall legacy of the rivalry was best described by someone who has spent four years watching it evolve into one of the best in the New York area.

NEWARK, N.J. – For Veer Singh, the first battle Friday was not on the court, but with his stomach. Singh, a 6-foot-6 2016 wing prospect, had battled flu-like symptoms for the last 48 hours, but he fought through it and provided a gutty effort to assist his team in a gritty 55-50 victory over Gill St. Bernard’s in the Newark National Invitational.

There was uncertainty if he would even play due to the illness and he did not participate in warm-ups, according to his coach, Todd Decker.

He did play and he struggled in the first half before finding his rhythm late in the game.