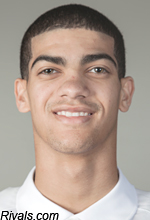 By JACK LeGWIN Special to ZAGSBLOG South Florida has another top prospect at the point guard position in Haanif Cheatham. Cheatham, ranked No. 29 in the Class of 2015 by 247 Sports, is a 6-foot-5 lefty out of Pembroke Pines Charter and has led his team to a 9-2 season, averaging 23 points, 5 rebounds and 7 assists a game along the way. A long, smooth lefty from Puerto Rico, Cheatham told SNY.tv that he has been watching a lot of point guards from the ACC and the Big 12 recently, and he sees the similarities. “I can really play the one or the two, and Marcus Paige is one of the best in the country at that,” Cheatham said of the UNC point guard. “Him being a lefty as well that can score at both positions is something that I really think that I can do. Marcus Smart is another player that I model my game after, his ability to be so tough and do everything on the court is definitely something that I watch.” Cheatham currently holds offers from Miami, Alabama, Vanderbilt, Pittsburgh, Georgia, South Florida, Central Florida, Murray State and Florida International. He has also received interest from Kansas, Florida, Florida State, Baylor and Villanova. “I would like to head up to Villanova, Florida, Florida State and Kansas this summer,” Cheatham said. “Kansas assistant Jerrance Howard has been contacting me since after Peach Jam this summer, so I want to visit there, and Villanova has come on pretty recently, about the fifth or sixth game of the season, and they’re playing really well right now, so it’s definitely a school I want to look at.” Cheatham will play on the EYBL circuit for Nike Team Florida this summer with Chance McSpadden, Florida-commit Kevarrius Hayes and UCF commit Chad Brown. Follow Jack on Twitter

Justin Bibbs: Ready for the ACC