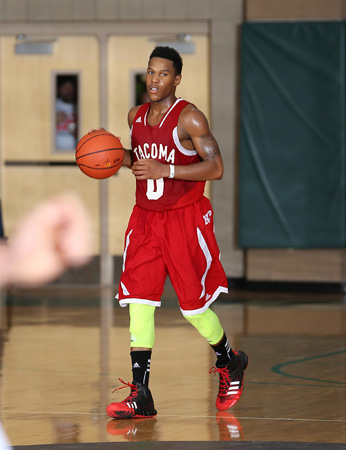 By JACK LeGWIN Special to ZAGSBLOG Montverde (FL) Academy is known for getting the best players from all over the country, the most recent of which is West Coast stud Ahmaad Rorie and he has made a huge impact for the No. 1-ranked Eagles. Rorie, ranked No. 89 in the Class of 2014 by 247 Sports, is a Cal signee that stands at 6-foot-1, 185 pounds. He starts alongside LSU-bound Jalyn Patterson and Ben Simmons, Ohio State-bound D’Angelo Russell and Virginia Tech- bound Justin Bibbs. “I had heard about Coach [Kevin] Boyle and how he had coached Kyrie [Irving] and everyone he had coached,” Rorie told SNY.tv. “I always wanted to play at a prep school my senior year so I could get more prepared for college.” Rorie, a native of Tacoma, Wash., says that being a part of the Cal tradition was also something that he has wanted since he was a kid. “Cal since I’ve been growing up has been a dream school of mine,” Rorie said. “Growing up, all I really wanted to do was play at Cal. Coach  [Mike] Montgomery told me that if I commit early, they would commit to me. I’ve always wanted to play in the Pac-12 too.” One of the best shooters in the Class of 2014, Rorie rarely takes low percentage shots from long range, which leads to him being one of the best offensive point guards in the class. “My ability to shoot goes back to my freshman year,” Rorie said. “I used to always be in the gym shooting with my AAU coach, and he’d talk to me about how I needed to make sure I had a good 3-point game, because a lot of point guards can’t shoot. I also worked a lot on my midrange because he always said that about five percent of players across the world have a really good midrange game, so I worked on it a lot.” Rorie is the second recruit to land himself a spot in Berkeley next year alongside big man Idrissa Diallo, and he has set a high bar for himself heading into the season. “Starting right away is my goal,” Rorie said. “I really wanna be first team all-freshman, I think we could win the Pac-12 as well as win the conference tournament.” Photo: Adidas Follow Jack on Twitter