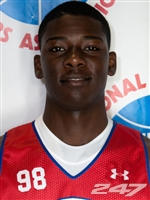 By JACK LeGWIN Special to ZAGSBLOG A couple weeks ago, Angel Delgado left Huntington (W.V.) Prep, and returned much closer to home to attend The Patrick School in Elizabeth, N.J. The Patrick School’s head coach Chris Chavannes spoke with SNY.tv about the reason, as well as what he brings to the program. “He had visited our school before he left Redemption Christian [in Troy, N.Y.],” Chavannes said. “That was before he ended up at Huntington Prep. He was just homesick, wanted to be closer to home, it really wasn’t that big of a thing. He’s so happy now, and so acclimated now, it’s almost like he’s been playing with us for four years.” Not too long after he arrived in New Jersey, the 6-foot-9 Delgado and the team traveled out to Torrey Pines, Calif., to play in the Under Armour Holiday Classic, where the Celtics went 2-1, beating Bishop O’Dowd (CA) and Westtown (PA), losing to Loyola (CA). “The first game he had to get a bit acclimated,” Chavannes said. “The rest of the weekend he played very well, defensively and offensively, especially on the defensive end of the floor. I was happy with his play.” Delgado, a Seton Hall commit from The Bronx, is ranked No. 45 in the class of 2014 by ESPN, and is expected to make an impact with the other four incoming freshmen, all of whom are New York/New Jersey natives. Delgado will be joining Isaiah Whitehead, Khadeen Carrington, Ismael Sanogo, and Desi Rodriguez next year for the Pirates, creating the 13th ranked recruiting class in the country, per ESPN. Whitehead and Rodriguez continue to develop a chemistry as they play together at Lincoln High School under coach Tiny Morton, who may join the Seton Hall staff in 2014. “Angel is a very good rebounder as well as a great scorer,” Chavannes said. “He doesn’t just score with his back to the basket, he can score facing the basket, too. He is a very good ball-handler as well. He can bring the ball down the court, and is a player that can come in and produce right away.” Photo: 247 Sports Follow Jack on Twitter