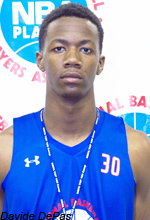 By JACK LeGWIN Special to ZAGSBLOG Maryland has added a big piece to their 2014 recruiting class. Trayvon Reed, a 7-foot-1, 219 pound center out of Shiloh Snellville (Ga.) High School joined Romelo Trimble, Dion Wiley and Jared Nickens when he committed to the University of Maryland on Thursday afternoon. He cited the success of a former Maryland big man Alex Len as a reason that he chose the Terps. “I felt like the situation that’s going on with me , Maryland is the best choice,” Reed told SNY.tv. “Alex Len sort of boosted my confidence with that choice. He came in at 218 (pounds), and left at 252. I’m 219 now and I feel like its the same situation.” Reed is a center who has played against some of the best competition in the country this summer when he played on Each 1 Teach 1 Elite on the EYBL circuit. He is ranked 68th in the class of 2014 by Rivals, and 84th by ESPN. When he was asked what he would bring to the table for the Terrapins, Reed feels like he will contribute in one particular area. “I will bring hard play every time I touch the floor,” Reed said. “I’m excited, I’m ready.” Follow Jack on Twitter

Perkins to Announce Saturday; All Signs Point to Gonzaga