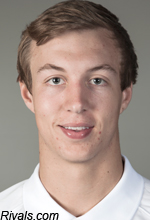 By JACK LeGWIN Special to ZAGSBLOG Luke Kennard has been a hot commodity this summer, and his visit to Kentucky two weeks ago only fueled the flame. “It was a great visit,” Mark Kennard, Luke’s father, told SNY.tv on Thursday. “We had a great time, met coach [John] Calipari, and just had a great time.” A player who many think will seriously consider UK when the decision time comes, Luke told SNY.tv that Louisville was in his top 5 in July at 10th Grade Nationals in Orlando after Peach Jam. “Coach [Rick] Pitino called me [after] Peach Jam.” Luke Kennard said. “He said that he wants to see me in a Cardinal uniform one day. I would say they are definitely in my top five right now.” The 6-foot-5 lefty shooting guard out of Franklin (Oh.) High School currently fields offers from North Carolina, Duke, Michigan, Kentucky, Louisville, West Virginia, Ohio State, Michigan State, Butler, Indiana, Iowa, Notre Dame, Purdue, Wisconsin and Xavier. “He has about 10-12 favorites right now,” Mark Kennard said. “We have to sit down soon and cut the list down. We will probably do that in the next two to three weeks.” Follow Jack on Twitter