Stephen Hurt, a 6-foot-10 center from Northwest Florida State, is currently on a visit to Kansas State.

“For a guy who is 6-10, 275, Stephen has some very impressive skills,” DeMeo told SNY.tv. “Very soft hands, has an array of post moves, passes well out of the post and is now starting to shoot the 3.

The fate of American men’s tennis rests with one man…

NEW YORK — The fate of American men’s tennis at this US Open now rests on the right shoulder of one man.

Take us out, Tim Smyczek.

Who you may ask?

That’s right, Tim Smyczek, a 25-year-old journeyman from Milwaukee whose car ran out of gas on its way to the Open Wednesday, is the last American hope in the men’s draw.

It doesn’t exactly call to memory the days of Sampras and Agassi, Connors and McEnroe.

When Philipp Kohlschreiber of Germany smacked a forehand overhead into an open court inside Louis Armstrong Stadium late Saturday afternoon, he eliminated No. 13 John Isner, the highest-ranked American, 6-4, 3-6, 7-5, 7-6 (5).

Nairn Enjoys Minnesota, Oklahoma Up Next

Lourawls “Tum Tum” Nairn took the first of his three official visits this weekend to Minnesota and said he had a great time.

Despite playing in front of a pro-American crowd in Arthur Ashe Stadium, Christina McHale, a native of Englewood Cliffs, N.J., saw her U.S. Open run come to end in the third round Saturday at the hands of No. 13 seed Ana Ivanovic, 4-6, 7-5, 6-4.

McHale saved one match point with a swinging forehand volley winner into the open court, but then sailed a backhand long on Match Point No. 2, causing Ivanovic to scream in joy and pump her fist.

McHale served for the match at 5-4 in the second set, but appeared to be shaken by nerves and was broken. She was broken again in the 12th game, giving Ivanovic the set and new life.

NEW YORK — If Canada qualifies for next summer’s FIBA World Cup of Basketball in Spain, their roster could be loaded.

Andrew Wiggins, Anthony Bennett, Tyler Ennis and Kelly Olynyk are all expected to join the squad if they qualify at this weekend’s FIBA Americas Championship in Venezuela, CIA Bounce coach Tony McIntyre told SNY.tv during an interview Saturday.

“I think it’s more than likely that [Wiggins] will,” said McIntyre, who has coached Wiggins, Bennett and Ennis, his son and a freshman point guard at Syracuse, with the CIA Bounce AAU team.

Torian Graham, the 6-foot-4 guard out of 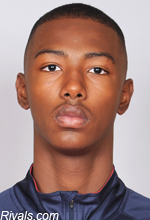 Harry Giles is taking his ACL recovery in stride.

The No. 1 ranked player in the class of 2016 by ESPN, Giles was one of two rising sophomores invited to the Elite 24 game last week in Brooklyn, but Giles could not participate because of knee surgery after he tore his MCL, ACL and meniscus during Team USA summer basketball. It will cost him most of his sophomore year at Greensboro (N.C.) Wesleyan Christian.

“The timetable is about 6-9 months for recovery,” Giles, who holds offers from Kentucky, Duke and North Carolina, among others, told SNY.TV. “I’m hoping to make it in that timeframe.”