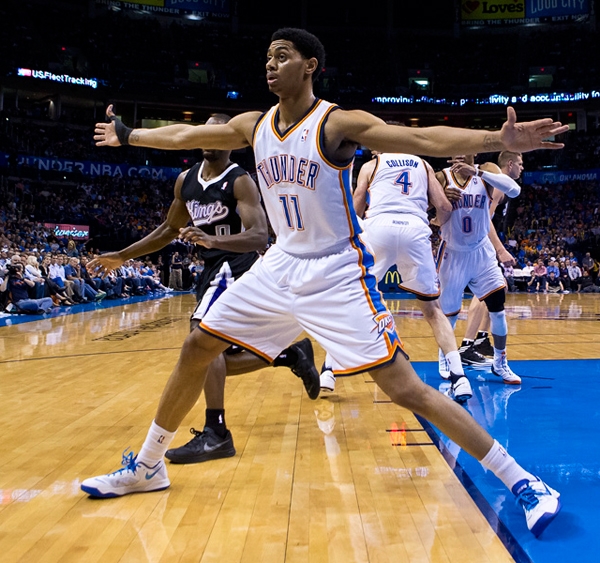 ORLANDO – The number of times the Oklahoma City Thunder sent Jeremy Lamb and other rookies down to the Tulsa 66ers of the D-League last season turned into something of a joke. Lamb, the 12th overall pick in the 2012 NBA Draft after two productive seasons at the University of Connecticut, played a whopping 24 games in Tulsa compared to just 23 in Oklahoma City. The difficulty of being shuttled back and forth between the NBA and the D-League can be chalked up to the 21-year old shooting guard not understanding how to be a professional. “One of the biggest things I learned was get on a routine,” Lamb said after he scored 11 points, including the game-winning jumper with 6.3 seconds to play, in a 79-78 win over the Orlando Magic at the Orlando Summer League on Monday afternoon. “Kevin Durant, Russell Westbrook, (Kendrick) Perkins, those guys do the same thing every day. They have a routine, the same routine every day. Kevin, Russ those guys, they get there before practice, get their shots up, eat breakfast, lift, practice, shots up. They’re big on routine and that’s the biggest thing I learned my rookie year.” A year wiser with a professional season under his belt, the long, lanky, 6-foot-5 shooting guard is in Orlando with something to prove to a team that could probably use a little more bench scoring next season. Through two games, Lamb hasn’t been shy, shooting 4-for-16 on Monday after shooting 5-for-16 on Sunday. His fifth and final make on Monday is why people remain high on his game and his potential. With the Thunder down by one with the clock ticking late in the fourth quarter, Lamb drove to the right with second-year Magic guard Moe Harkless guarding him. Lamb stopped on a dime at the right elbow, causing Harkless to go flying. Lamb dribbled the ball behind his back, stepped back to the foul line and buried a 15-foot jumper to cap the scoring. Lamb made the entirety of the play look easy, which he did for his entire tenure at UConn when he averaged 14.1 points over 75 games. “I feel every time I get on the court, I’m trying to prove myself whether it’s the dude I’m playing against, coaches, whatever,” Lamb said. “Every day I get on the court, I’m trying to prove to myself that I can play. I’m just out here playing hard, showing that I improved, showing that I’ve been working hard.” In all of those D-League trips last season, Lamb did what he was sent there to do. He played a lot, averaging 32.8 minutes in 21 regular games and 37.3 minutes in three playoff contests, and he also scored a lot. He went for 30 points on four different occasions, including three straight 30-plus efforts in January. Still, the D-League is not the NBA no matter how many minutes he was playing. There were some low moments on those trips to Tulsa, but Lamb now finds himself in position to crack a rotation that is in need of more bench scoring. “I love basketball, I love getting better,” Lamb said. “Last year, there was a couple of points where I was like, ‘Man, I wanna play,’ but like I said, I took it as a learning year, I took it as a year to get better and that’s what kept me motivated.” Follow Josh Newman on Twitter

Father: World Peace Will Retire if Amnestied by Lakers