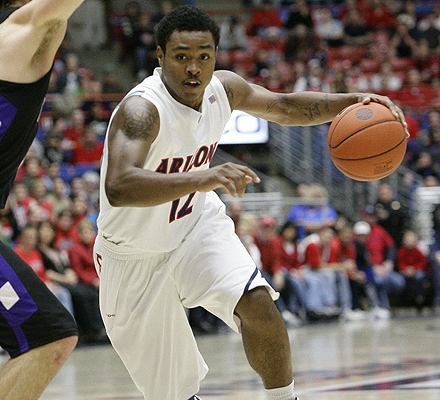 EAST RUTHERFORD, N.J. – Reigning MAAC Player of the Year and former Rice High School star Lamont “MoMo” Jones worked out for the Boston Celtics on Wednesday, then made his way to New Jersey to work out for the Brooklyn Nets on Thursday. Before the Harlem native got to his hotel Wednesday evening, he spoke with his best friend, who informed him a familiar face, Kevin Parrom, would also be at PNY Center working out for new Nets head coach Jason Kidd, General Manager Billy King and Assistant General Manager Bobby Marks. “That was my college roommate, it’s great, I didn’t know he was gonna be here,” Jones said of Parrom, a Bronx native and his teammate at the University of Arizona for the 2010 and 2011 seasons. “I saw him last night, we talked for about two hours. It was great to catch up with him, it’s great to see guys like us growing up where we came from and the predicaments we were in just to be here together.” Jones, who had previously worked out for the Wizards and has the Milwaukee Bucks scheduled for Monday, and Parrom, who played 110 games for the Wildcats over four years, were once bound by their respective high schools. Jones blossomed at now-defunct Rice before heading to American Christian as a junior and Oak Hill Academy as a senior. Parrom was a standout for three years at St. Raymond before heading to South Kent (Conn.) for his senior season. A relationship and a respect had grown on the summer circuit in the years before entering high school and becoming two of New York City’s best. That relationship stayed strong as they finished their prep careers in different states, but would come back together thanks to Parrom. The 6-foot-6 swingman, who counted the Nets as his first NBA workout, committed to Arizona in May 2009 after his senior season and not long after head coach Sean Miller was hired. Parrom wanted Jones to follow him out west. With the help of Miller’s assistant and Queens native Emanuel ‘Book’ Richardson, it worked as Jones committed to Miller six weeks after Parrom. “We always played against each other, so we built a relationship over the years,” Parrom said. “Every time we played against each other, we weren’t friends on the court, but off the court, we’re great friends.” “We were always cool, friendly, laugh, joke around,” Jones said. “We didn’t hang out until we got to college. He was one of the reasons I went to Arizona. He called me and was like, ‘I’m going there, let’s go together.’ It was a great experience and he’s a great guy, a really friendly kid and it’s just a pleasure to be around him.” Parrom played four productive, but injury-plagued seasons before deciding in early April he would not wait around to see if the NCAA would grant him a medical hardship waiver for a fifth season. Jones, along with Parrom, was a key contributor as a sophomore on the 2011 Wildcats team that marched to the Elite Eight, losing to Connecticut, 65-63, in the West Regional final. Citing a desire to be closer to home to be near his sick grandmother, Jones bolted from Tuscon, chose Iona and was granted a hardship waiver to play immediately. Jones helped the Gaels to consecutive NCAA Tournaments in his two years in New Rochelle in addition to a MAAC Tournament title as a senior when he averaged 22.5 points per game. While Jones suffered from tough circumstances with his grandmother, so did Parrom. Parrom headed home to the Bronx early in his junior year to visit his sick mother when he was shot twice, once in the right knee and once in the left hand inside his father’s apartment, a story broken by SNY.tv. The injuries were not life threatening, but he would miss two regular games as a result. His mother passed away from cancer three weeks after the shooting, which put Jason Gonzalez behind bars for six years for attempted murder. Despite that incident and a slew of injuries that caused him to maybe never reach his full potential at Arizona, Parrom has made his way to the doorstep of a professional career and he had a familiar face there to share the experience with. “It was surreal,” Parrom said. “We went on our first (college) visit together and now we’re in a workout together. It’s good to have another New York guy with you. It was fun.” “He’s been through a tough stretch in his life, just to see him on top and back at it on the floor in full health, it’s just a blessing,” Jones said. Follow Josh Newman on Twitter