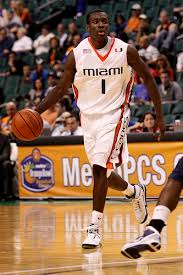 Everyone knows that Jamaica has produced the fastest man on Earth in Usain Bolt. But the Caribbean island has also brought forth some talented basketball players, too, most notably former Knicks star Patrick Ewing, who was born in Kingston. The way Ajani Williams sees it, Jamaica now has more than enough talent to compete for an Olympic bid in 2016. Williams, the President of the Jamaica Basketball Association, rattles off a Who’s Who of talented players of Jamaican heritage, including current NBA players Roy Hibbert, Tristan Thompson, Ben Gordon, Andre Drummond, Toney Douglas and Ryan Hollins; former NBA players like Samardo Samuels, Jerome Jordan and Patrick Ewing Jr.; and current or former college stars like Anthony Bennett of UNLV, Kyle Anderson of UCLA, Durand Scott of Miami, Tyler Ennis of Syracuse and Dylan Ennis of Villanova. “For a small island that is already punching above its weight in track and field, dominating [the] Beijing and London [Olympics], Jamaica suddenly seems to be slowly abuzz with talent and a rising basketball organization,” Williams told SNY.tv. In Williams’ ideal situation, many of the aforementioned players would come together and compete for Jamaica in the FIBA Americas Championship Aug. 30-Sept. 11 in Caracas, Venezuela. Jamaica is competing in the event for the first time and is grouped with Uruguay, Puerto Rico, Canada and Brazil. The other group includes the Dominican Republic, Mexico, Venezuela, Paraguay and Argentina. The U.S. is exempt from the event as the defending Olympic champion. Several players are considering it, including Scott, the former Miami star and New York native, who hopes to be drafted in the June 27 NBA Draft and whose summer plans could be complicated if he makes an NBA roster. “Possibly, possibly,” Scott told SNY.tv. “It’s in the process, it could happen, but it would be a great opportunity for me to go out there and represent the place where my family grew up and where I’m from, so why not?” Other players, such as Jordan, a former Knick, are unsure of their plans. “Not sure yet,” he told SNY.tv by text. Villanova’s Dylan Ennis had expressed interest in playing for Jamaica this summer, but is unable to do so. “He’s not going to play — misses too much school,” Villanova coach Jay Wright told SNY.tv. Dylan’s younger brother, Tyler Ennis, will play this summer for the Canadian Junior National Team at the U19 World Championships. Anderson, the former St. Anthony star and rising sophomore at UCLA, is likely to stay in Los Angeles and train this summer, his father, Kyle Anderson Sr., told SNY.tv. Still, Williams and his colleagues are optimistic going forward that Jamaica could field a powerhouse team if a good chunk of the players mentioned above suit up. “If Jamaica is able to make more history as they did by breaking out of the Caribbean Region tournaments and into the Centro and then by coming in third in the Centro Basket Tournament last summer,” Williams said, “then they will continue to attract bigger and bigger names.” Can Jamaica ever begin to accomplish in basketball what Bolt has done in track? Only time will tell.