With Standout College Career Behind Him, Jackson Prepares For NBA Jump 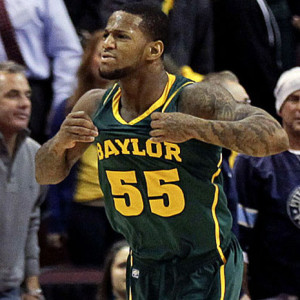 EAST RUTHERFORD, N.J. – Within a group of recognizable point guards who attended the Nets Draft Combine on Wednesday and Thursday, Baylor’s Pierre Jackson does not have the biggest name, but he most definitely has the biggest individual resume. The 2011 NJCAA Division I Player of the Year as a sophomore at perennial JuCo power College of Southern Idaho, Jackson had a highly-productive two years in Waco. He scored 1,235 points, dished out 478 assists, was a two-time Bob Cousy Award finalist, a two-time All-Big 12 first team pick and an Associated Press All-American honorable mention as a junior. Jackson capped his career by earning the Most Outstanding Player award at the NIT for the 23-14 Bears, but none of that matters now. His strong play in college has gotten him this far, but he will now need to prove he can do it at a higher level and despite the fact he is only 5-foot-10 and 180 pounds. Thursday at PNY Center in front of personnel from all 30 NBA teams was a good start as he showed off all of the attributes that made him the highest rated prospect of the 44 players that competed over the two-day event. Jackson is currently slotted as the No. 42 overall pick and rated as the eighth-best true point guard in the draft by DraftExpress. “He’s quick, a tough little guy with great confidence who shoots it, pushes it, passes it,” one veteran NBA scout who was present Thursday afternoon told SNY.tv. “He’s better than advertised and better than some of the guys rated ahead of him. When asked where he would draft Jackson, the same scout said, “between 35-45.” Jackson was matched up with Kentucky’s Julius Mays during the live 5-on-5 portion of Thursday’s workout. Mays, a shooting guard last season with the Wildcats who is transitioning back to point guard for the next level, has three inches and 12 pounds on Jackson. Once the workout was done, even Mays touted how quick and aggressive Jackson is with the ball in his hands. Another key attribute that left NBA executives and scouts with a strong impression of Jackson was his leadership in trying to run what amounted to a make-shift offense with guys he had never played with before. “I played four years at two different levels and I won at both levels, so I think I just got a lot of leadership in both scoring and assists,” Jackson told SNY.tv. “I like to do both, but getting my teammates involved is what I really like to do. I think I did pretty good trying to lead the team and just doing what I know I’m capable of, not trying to force anything, knocking down shots when I had to, getting to the lane, finding people and playing good defense.” Some would argue that Jackson, with his scoring prowess and ability to get everyone involved, is an elite talent and the only thing holding him back from making a real dent in the NBA is his height. Be that as it may, Jackson has teams intrigued. Next up for the Las Vegas native is a workout at the Boston Celtics this weekend. Two other point guards, Phil Pressey of Missouri and Peyton Siva of Louisville, both of whom competed at the Nets’ event, are also slated to participate in the Celtics workout. “My stock hasn’t dropped and it really hasn’t risen as much, but I think I’m in a good spot right now,” Jackson said. “I ain’t got no worries. Hopefully, these next couple of weeks, I can improve.” Follow Josh Newman on Twitter