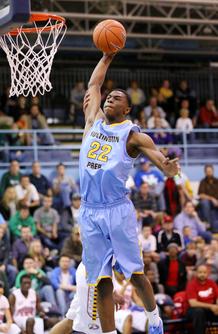 The most drawn out and hyped college basketball recruitment in recent memory has finally come to an end. And with a surprise. Andrew Wiggins on Tuesday announced his plans to play at Kansas, choosing the Jayhawks over the two presumed favorites, Florida State and Kentucky, as well as North Carolina. “The other schools were great, but Kansas had my heart,” Wiggins told Grant Traylor of the Herald-Dispatch, the lone reporter permitted to cover the event. “That’s it. I followed my heart.” The 6-foot-7 Wiggins made the announcement before his parents and teammates at  Huntington (W.V.) St. Joseph Central Catholic School, choosing a low-key signing instead of a big-time press conference or an announcement on ESPN. Wiggins is the consensus No. 1 player in the Class of 2013 and is projected as the No. 1 pick in the 2014 NBA Draft. The Naismith and Gatorade National Boys Basketball Player of the Year, Wiggins averaged 23.4 points, 11.2 rebounds, 2.6 blocks and 2.5 assists last season. “Obviously, everyone in Jayhawk-land is overwhelmed and excited today,” Kansas coach Bill Self said. “This was a pleasant surprise because we never had an idea which way he was [leaning]. Andrew did this the exact way he said he was going to. He played his cards very close to his vest as did his mother and father. I knew we were one of four. The competition was very stiff and we were fortunate that we were able to ink him today. He’s a tremendous talent and a terrific kid. Probably an even better kid than he is a talent. We think he has a chance to be about as good a prospect as we’ve ever had. “He brings athleticism, length, scoring ability and he’s also an assassin, an alpha dog and we definitely need that when you have a whole bunch of young kids,” Self said. “I think he’s going to be not just a good player, but have the chance to be a great one. I know the people that support our program are going to be pleasantly surprised when they see him run and play the very first time he gets the opportunity.” Wiggins will now play basketball in the same state as his older brother, Nick Wiggins, who will be a senior at Wichita State. Wiggins’ decision gives Kansas two players ranked No. 1 at their position in Wiggins (small forward) and Joel Embiid (center), according to ESPN.com. In this poll on ZAGSBLOG, only 12 percent of more than 7,000 voters had picked Kansas as Wiggins’s destination. Kentucky led with 44 percent.

Kentucky fans had hoped — and many had expected — that Wiggins would join the parade of McDonald’s All-Americans coming to Lexington next season to play for coach John Calipari. Kentucky already has a record six McDonald’s All-Americans and Wiggins would have made it seven. “I don’t think there  have ever been five McDonald’s All-Americans going to the same school in one year, let alone the six that has Kentucky this year,” longtime New York recruiting expert Tom Konchalski said. “And seven, I don’t think there ever will be.” Nick Wiggins told SNY.tv at the Final Four that his brother, a naturally quiet, shy kid, might want to make his own mark in college, as opposed to joining a group of studs at Kentucky. “Definitely, I’m sure that he would want to make his own legacy and you could see it kind of on Kentucky’s team this year,” he said. “They had a lot of stars and it kind of didn’t jell as well as it did the team before when it had a lot of freshmen that really jelled together. So it’s just difference in players and putting combinations together. Coach Calipari’s a very good coach so I wouldn’t blame it really at all on him.” Meantime, Florida State folks had hoped Wiggins would follow both of his parents, former NBA player Mitchell Wiggins and former Canadian Olympic track star Marita Payne-Wiggins, to the school. So did his friend and Huntington Prep teammate, Xavier Rathan-Mayes, a 6-4 shooting guard who committed in October. Wiggins and Rathan-Mayes are fellow Canadians and teammates on the Canadian Junior National Team. “Drew, you should come to FSU because you’re my best friend and because of the opportunity we have to do something special together that not too many people can do together,” Rathan-Mayes told USA Today before the announcement. “Other than that, I want you to go where you’re happy; so no matter where you go, I’ll support you 100 percent and be your biggest supporter!” Kansas is in the mix almost every year for a Final Four and next year will be no different with a class headlined by Wiggins and also including Embiid, Selden, Brannen Greene, Frank Mason and Conner Frankamp. “We had an unbelievable class when we signed Brandon (Rush), Mario (Chalmers), Julian (Wright) and  Micah Downs (2005-06); that’s a big-time class,” Self said. “This one has more upside. Andrew has a chance to be the first pick in the draft. Joel Embiid goes from being an unranked player to being the top center prospect in the class. He’s raw but so gifted physically. Wayne Selden is a McDonald’s All-American and top-15 guy. Everybody knows about those three, but they are sleeping on are the other three. Conner Frankamp can play for anyone and so can Brannen Greene. Frank Mason is about as underrated of a point guard as there is in the class. It’s been a great recruiting class, but we need to have a great recruiting class because we lost so many guys on a team that did pretty well this year.” “He’s the best player in the world so I don’t know how far he can bring them,” Syracuse-bound point guard Tyler Ennis of St. Benedict’s Prep told SNY.tv of Wiggins. “But having the best player in the world is not oging to hurt anybody.” Still, Wiggins’s tenure in  Lawrence figures to be short. The 2014 NBA Draft is expected to be much stronger than the 2013 Draft, which has been called “historically weak,” and Wiggins figures to headline a draft a year from now which should also include 2014 stars like Kentucky pledges Julius Randle and Aaron and Andrew Harrison and Arizona-bound forward Aaron Gordon. “He just needs to stay in the gym this summer shooting jumpers as well as working on his game off the dribble which will only increase draft status next year,” one veteran NBA scout told SNY.tv. Said a second NBA scout: “He is a great young player. He should be right at the top of the college game right away and he is built for the NBA with his physical tools and his exceptional understanding and skill set.” Knicks star Carmelo Anthony saw Wiggins play last month at the Jordan Brand Classic in Brooklyn. Asked if Wiggins could make an immediate impact in the NBA, Anthony said: “It takes time. I wish him the best. Next year if he do what he gotta do and he’s ready to make that step, then more power to him. I support his decision.” For one year, Kansas fans — and not those from Kentucky, Florida State or North Carolina — can revel in Wigginsanity. [youtube http://www.youtube.com/watch?v=mOWFGCgkm-Y] **For previous articles on Andrew Wiggins, click here. Photo: Herald-Dispatch

Mudiay Looking to Cut to Five