UCLA and USC may have made big splashes with new coaching hires in the last four days, but they aren’t the only Pac-12 schools making major news lately. On Tuesday morning in Chicago where he is set to play in Wednesday’s McDonald’s All-American Game, 6-foot-8 consensus top-5 recruit Aaron Gordon announced his intentions to play for head coach Sean Miller and the University of Arizona. The second-best player still on the Class of 2013 board behind Andrew Wiggins, the Archbishop Mitty (Calif.) senior chose the Wildcats over Oregon, Washington and Kentucky. “It’s an absolutely outstanding fit for me — 7-footer, two large four men,” Gordon told the Mercury News. “They’re long, athletic, get up and down the floor. “They also have a point guard with T.J. McConnell, and they also have Nick Johnson who can guard anywhere. So with three long defensive players on the wings, I think we’re going to be a hard team to score on.” “I think it’s a perfect fit, with what they have coming back and their style of play,” Mitty coach Tim Kennedy told the paper. “He’s going to excel. He would be a perfect fit for anybody because he’s just a great basketball player — so versatile.” “National title — definitely,” Gordon told the Mercury News about the team’s goals.Gordon’s presence, along with fellow 2013 commit Rondae Jefferson in Tuscon makes the Wildcats an immediate Pac-12 and Final Four contender. Coming off a trip to the Sweet 16, Miller should also return Brandon Ashley, Kaleb Tarczewski and Grant Jerrett. Gordon is currently projected as the No. 4 overall pick in the 2014 NBA Draft by DraftExpress, but if there were no age limit, he would probably go in the top three this June following his senior year at Archbishop Mitty, which is located in San Jose. FRAZIER TO SMU 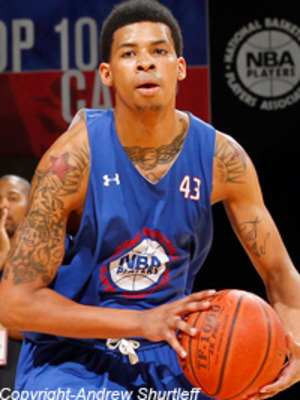 Keith Frazier, a five-star shooting guard from Dallas Kimball, is also off the board. The 6-5 McDonald’s All-American picked Larry Brown and SMU over Texas Tech and Texas A&M. “Ya boy a SMU Mu$tang lets get it!,” he Tweeted. “Keith appreciates the relationships that he built with each school that recruited him,” his mentor, Erven Davis, told SNY.tv. “In the end, the ability to play big-time basketball near his son and family for Coach Brown was the reason for SMU.” Frazier joins shooting guard Sterling Brown and power forwards Ben Moore and Yanick Moreira in SMU’s 2013 class. The Mustangs will join the yet-to-be-named former Big East next season. Follow Josh Newman on Twitter

Bob Knight Looking Tamer Than Mike Rice Now....And He Was Interested in Rutgers