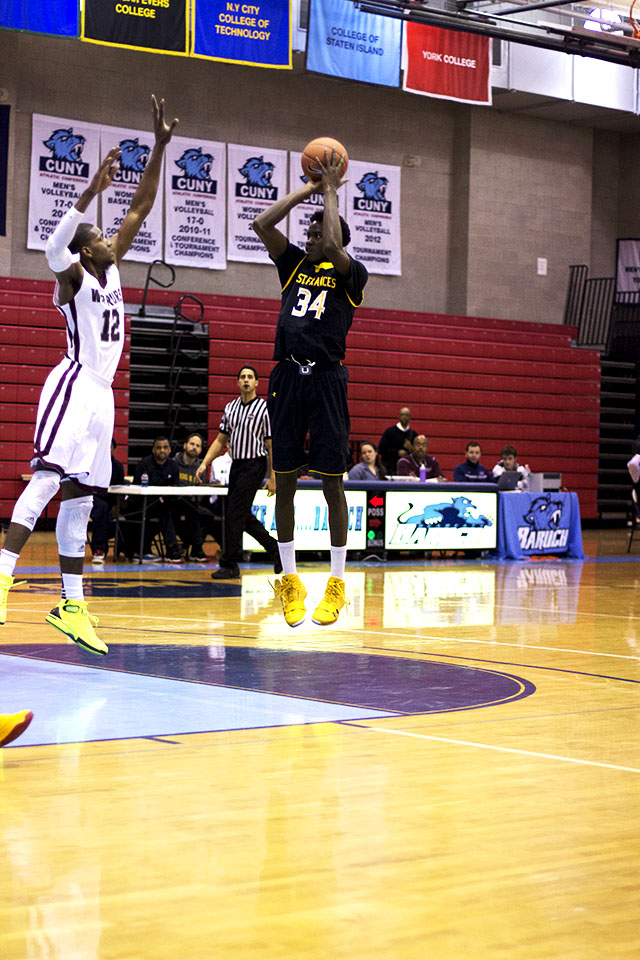 NEW YORK –– Dwayne Morgan brought his sublime skill set here Saturday afternoon when his Baltimore St. Frances team played Curtis (N.Y.) in the Big Apple Basketball Invitational at Baruch College. After St. Frances got down 20-5 early, they stormed back for a 51-46 victory behind Morgan’s 14 points and seven rebounds. UNC-Greensboro bound shooting guard Tevon Saddler was named the MVP after finishing with 15 points and five boards. Rhode Island commit Hassan Martin had 15 points and 14 rebounds in the loss. The 6-8 Morgan from the Class of 2014 was clearly the highest-profile recruit in the game and he and his AAU coach, Dwayne Wise, said three schools are working the hardest for the long, athletic forward — Maryland, UNLV and Indiana. “Those three have been recruiting him the hardest,” Wise told SNY.tv. “All of them have been recruiting him heavy but those three probably have been pressing him the longest.” Maryland has several connections. They are the home-state school. Assistant coach Bino Ranson is a St. Frances alumnus. And Maryland’s Nick Faust is a former teammate of Morgan’s at Baltimore City College. “[It’s] real appealing,” said Morgan, who has visited the campus unofficially. “It’s a lot of support [at Maryland]. I know Nick Faust. I went to high school with NIck. I know him real personally.” As for UNLV, they also have Baltimore connections in Roscoe Smith and Daquan Cook, who also played at St. Frances. Morgan is set to visit UNLV Feb. 9. “UNLV, ever since he came with the program [B’more’s Finest] has also been recruiting him just as hard,” Wise said. “They have a few Baltimore kids on the roster, Roscoe Smith and Daquan Cook. Daquan Cook is from our program. He’s friends with Daquan.” Indiana assistant Kenny Johnson is a former Team Takeover coach who has deep ties in the DMV area, and Wise said Morgan will “most likely” visit Indiana after the UNLV visit. Missouri, Seton Hall and South Florida were also on Morgan’s initial list of six schools. Morgan has visited Seton Hall unofficially. The Pirates already have one Baltimore commit in Aquille Carr and would love to add Morgan, too. “Aquile and Dwayne are both from the program,” Wise said. “So naturally the coach [Kevin Willard] still continues to recruit from the program.” South Florida assistant Eric Skeeters is also a Baltimore native. Morgan will visit campus next week when the team travels to Montverde (Fla.) Academy. Wise said UConn and Georgetown — where has also visited unofficially — also continue to recruit Morgan. “Georgetown has been consistently recruiting him,” Wise said. “Otto Porter has had some success so he has seen some [similarities] in their offense. “And I’m going to tell you what, UConn is really heavy on him. Coach [Kevin] Ollie  calls pretty much three times a week. And they’re actually up here to visit him next week. That will be his first chance to really see him.” As for Morgan’s upside going forward, St. Frances coach Nicholas Myles said: “I don’t think Dwayne has scratched the surface on what he’s going to be. He’s got so much talent. He does a lot of things well on the floor and it’s just going to come with time with him. He’s going to be a tremendous basketball player when it’s said and done.” (Photo: Siri Larkins, Big Apple Basketball)